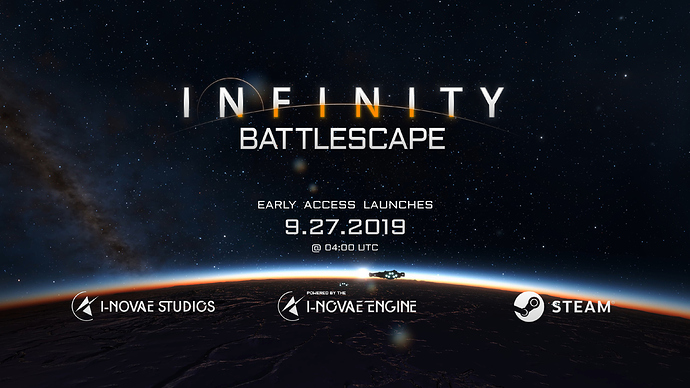 We are happy to announce that Infinity: Battlescape will be released to Steam Early Access on Friday, September 27th, at 04:00 am UTC.

Once the game becomes available on Steam all backers who pledged Asteroid Supporter or higher will receive permanent access and we’ll close our crowd-funding campaign. Upgrading your pledge will not be possible anymore, so this is your last chance to grab our time-limited perks.

Thank you for supporting us on

Q. If I pledged to your crowd-funding campaign, will I have access to the game on Steam ?

A. Yes, although we cannot confirm that everybody will have access to the game on Steam on the day of the launch. In the worst case, we’ll provide backers access to Steam [ providing Steam’s acceptance ] in the days following the launch.

The way it will work, you’ll simply go into your I-Novae account profile and authenticate on Steam. Doing so will provide us with your Steam user ID, which we’ll then automatically use to associate the game to your Steam’s library. There are no keys involved in that process.

Extra game copies ( higher tiers ) will use a separate process, which we haven’t figured out yet, and is unlikely to be ready for the launch.

Q. How do I upgrade my pledge before the Steam Early access launches ?

A. You can upgrade your pledge at any moment from your I-Novae account ( see below for instructions on how to create one and link it to your pledge ):

Q. Do I need an I-Novae account to get the game on Steam ? How do I create one ?

A. You must create an I-Novae account with the same e-mail than you used on Kickstarter or IndieGoGo. You can verify that your pledges are correctly detected on this page:

The game is currently in closed beta, but will step into Early access on the 27th of September. At that point, backers will receive permanent access to the game through our own launcher, and shortly after ( ideally on the same day ) will be able to associate their account to their Steam’s library, and play the game on Steam.

Q. I already have an I-Novae account but it uses a different e-mail address than the one I used for pledging, what do I do ?

A. You can add a secondary e-mail address to your I-Novae account settings:

Q. I changed my e-mail on Kickstarter / IndieGoGo since I pledged in 2015. How do I use my new e-mail address ?

A. There is currently no automatic way to do this, as we are matching your I-Novae account to the e-mail that was used for pledging no matter what.

To verify your identity, please send us a private message from your Kickstarter or IndieGoGo account, and include your new e-mail address as well as your pledge ID#, and we’ll manually update our records as soon as we can.

Q. How can I learn more about the state of development and progress of the game ?

A. We send a progress update e-mail every week through Kickstarter or IndieGoGo ( also reposted on our forums ).

A. Yes, absolutely. We’re only asking that you do not misrepresent the state of the game ( Early access ) and make it clear that everything is still a work in progress.

Q. At what price are your launching on Steam ?

A. We will be launching on Steam at $34.99 with a 5% discount in the first week. Local-region pricing may differ.

Q. What are your servers provisioning strategy ?

Q. Is the game fully playable yet ? What can we do in game ?

A. We are still working on the main game loop and objectives so at the moment the game is like a giant sandbox. You can fly seamlessly between ( or fly over ) planets / moons, spawn around stations / bases, participate in battles, fight against other players or AI, get credits and upgrade your ship. Capital ships are partially playable. The full game will also offer more objectives such as damaging / destroying bases, scouting locations, attacking / protecting haulers etc…

Q. Are there non-combat things to do ? Missions, trading, pirating, etc… ?

A. Infinity Battlescape is not a sandbox MMO like Elite Dangerous or Star Citizen. We are a small indy development team with a fraction of their budget. We are only aiming at recreating massive space warfare in a single seamless solar system. While there will be secondary objectives, most of them will be combat or team-support oriented. Think of the game as Battlefield or Planetside with spaceships.

Q. How many concurrent players can play on a single server ?

A. While we only have a single solar system, it is true to scale and massive. There is no instancing, so all players can potentially participate in a single, big battle. We are aiming at supporting at least 200-300 players per server, but that number can increase later on once we get better hardware and optimize the server code. 500 to 1000 players could theorically be achievable.

Other topics of interest:

Discord community - to discuss the game or play together during events: Infinity Community Discord Server

Screenshots and videos recorded in game by the community: Wallpaper - Give Us Your Best Shot! (Image Intensive) and Battlescape Player Videos

Patch notes - we try to update the game every 1-2 weeks: Patch and Updates Notes

More information about upgrading your pledge through your I-Novae account: Pledge upgrade system is now live