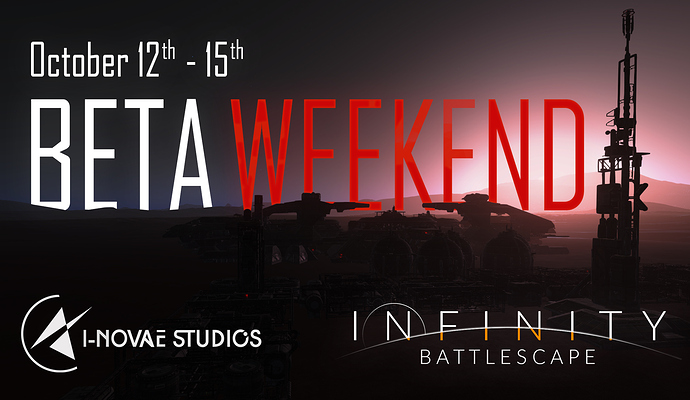 We are happy to announce that the first beta-access week-end for beta backers and above will launch on the 12th to 15th October week-end, starting next Friday at 19:00 UTC.

Any Infinity Battlescape backer who pledged at the beta tier ( Lunar supporter ) or above is elligible to participate and to get a taste of the game for the first time.

Note that the game is still in alpha development; this is not an announcement for the official beta launch. As you know, development of the game has been delayed by almost a year by now so just like we did for alpha backers, we are now hosting restricted play-test week-ends for beta backers so that they can experience the game as soon as possible.

If this is your first time playing the game, you will have to associate your Kickstarter or IndieGoGo email to an I-Novae account. More information about this procedure and the beta week-end can be found in this thread:

We are hoping to see you in-game this next week-end !

Yesterday we released patch 0.3.2.0. This patch adds support for respawning at carriers, which now act as mobile bases. The patch also revamped the repair/rearm mechanics. In previous versions, corvettes could generate a “supply crate”, which had to be picked up in the battlefield in order to get ammo. During testing we found this mechanic to be too difficult to use during battles, so instead we are now generating a passive aura around corvettes which automatically repair and rearm allied ships within range. It is now also possible to get repaired or resupplied while docking back in bases and stations hangars.

Going forward, we will release a new patch next thursday right before the beta-access week-end launch. As there are only 4 days left, we will primarily focus on stability, a pass of optimization, bug fixing and HUD improvements.

Dan hosted a community event (where a bunch of players gather on the server at the same time and play together) yesterday evening. If you missed it, the VOD is available on youtube:

That will practically double the amount of players that may access the game than currently, which is about a thousand.