A new weekly update to go along with our release of a new update for the game (Developer Access backers only)! We were unable to release our v0.1.3.0 patch yesterday due to a partial outage at our data center however everything was all sorted out today and we released the patch without any problems. The major new feature for v0.1.3.0 is the addition of a playable mockup of the corvette. It’s big, less maneuverable, and has a very different flight model than the bomber which has already resulted in a number of pilots slamming into planets at fatal speeds. Of course this is only the initial implementation so we’ll be iterating on it quite a bit over the coming months. You can read more information about what’s changed in the v0.1.3.0 patch notes here. Below is a short video of some of our Developer Access backers playing around with the new corvette in all of its gray, untextured glory:

Now that the corvette has been integrated the next ship to get mocked up is the interceptor, which we expect to go pretty quickly. Following that will be additional weapon systems. Currently the only weapon available is a generic forward facing blaster which gets old pretty quick and is nowhere near being representative of the gameplay we’re going after. We want to get some additional weapon types mocked up before we begin integrating capital ships so that we can start testing real gameplay - which should also make our videos much more interesting to watch. 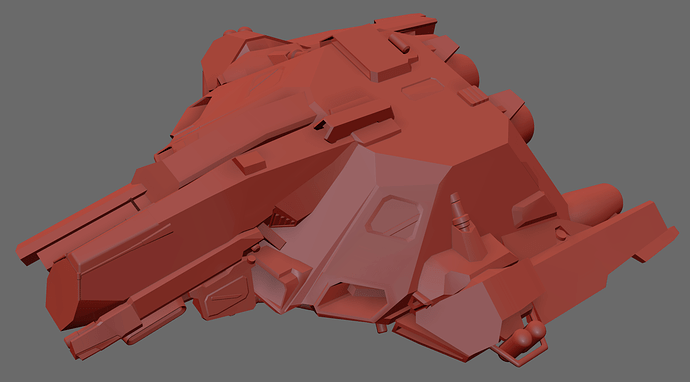 As I’ve mentioned before our goal is to have all of the major gameplay components mocked up in some form within ~2 months. That’ll give us approximately 5 months to get core gameplay reasonably well polished before the game becomes available to our Alpha backers. We also want to have the final art for the smaller ships (interceptor, bomber, and corvette) pretty well nailed down by the time we ship the Alpha. This will give our art team a good chunk of time to focus on the capital ships, stations, land bases, particle effects, and general polish as we push toward Beta and then gold release during 2017.

I’ve noticed that you guys keep saying “the” when talking about ships (the corvette, the bomber, etc.). Do you only plan to have one ship per class/type, or are more ships going to be designed in later stages of development?

The kickstarter had 6 playable ships that they are working on. The ships require modeling and balancing. The KS also mentioned a 7th “Fighter”, if we made the stretch goal. (which we did not)

It would be pure speculation to say they would add ships after its gone GOLD.

Who knows, they may decide to allocate their time on the persistent MMO once IB has gone gold.

Plus. Having 50 different ships with no defined role or balancing mechanism is the trademark of another software company.

I’m very happy they’ve decided to start small, and work out all the kinks before adding more content.

just curious, are you looking for more ship skins?

In the final game, will ships deploy landing gear automatically.

The new interceptor: https://sketchfab.com/models/4ae07ea3d6394cc898a2e0fdceddcfb0
I approve.
The bottom looks a bit weird, though.

a class defines behavior and performance, it pretty much defines what the ship will and won’t do, what do you exactly mean with “multiple”, ships that look different (skins)? ships that behave different (sub-class)?

If you’re building one kind of game, then it is important to have roles and balancing for the vehicles.

If you’re building a different kind of game, a game that tries to model a certain kind of “real life”, then the only balance is money. In real life a F-22 probably outclasses every other fighter. Everyone isn’t flying them because they’re restricted to one country and they’re very expensive.

How was this not clear?

And a logistical nightmare. Compare to the multirole Rafale which, while still relatively expensive at purchase and slightly less performing in the ASW role (and, you know, no dedicated stealth design), was designed to be low-maintenance from the ground up.

Logistics are actually a big factor in RL “balance”, but it is impossible to render in a game like that, along with international relations, company lobbying, varying standards, climate-based resistance (better have a twin-engine if you’re up north, so the plane won’t crash if cold seizes one engine)…
Many of which would be irrelevant in this setting anyway (cold won’t be an issue for spacecrafts that can fight at Pluto’s surface and then around Mercury a few minutes later).

IIRC, the plan was to have only one class for each ship type, but with possible choices of skins, and even possibilities to make and sell your own skins.

I would prefer CUSTOMIZATION of existing ships, over new ships.

Look at SC. They’ve completely screwed the pooch. Yeah they have a ton of ships, but why have different versions of the Aurora or Vanguard? (the answer is to generate $$$)

This game ISN’T SC. It’s not persistent like SC. Persistence will last a few hours, until the match ends. Your ship will be disposable. It’s NOT something you’re going to bring into the next instance. So, I don’t see the need for a bunch of models with custom flight models, when an interceptor is essentially an interceptor.

For a game of this scale, I would even limit customization to weapon, armor, and shield loadout. If mass is implemented, those settings will differentiate your interceptor’s flight performance from the other guys (but that may not be part of Inovae’s plans).

Also the game lore indicates Battlescape is about combat between three human corporations. There aren’t any alien races. It’s human vs human.

From my understanding, although IB is going to be a full game, in reality its a test tube for a possible MMO like SC or ED. But these guys have to crawl before they can run.

Rest assured, they’re not going to have their artists sit on their hands and do nothing. If they have the resourses available, they’re going to continue to add awesome content.

I just looked at the Kickstarter page. The 2.5 million stretch goal is an alien race, and new ship models and artwork.

You’ve got your work cut out

If you can find some additional investors, I’m sure Inovae will rise to the challenge

Astralis / Centaurans are Humans, too, not aliens.

I know Flavien is working on adding additional controller support to the game. Would you please consider balancing the controllers with fixed weapons before adding weapon systems like gimbals to the equation?

I’m certain that will minimize headaches in the future.

Make the flight model. Use whatever you want. If you want to use something sub-optimal, by all means go ahead. Keep that “controller balance” shit in Star Citizen where it belongs.

Even if the community could provide neutral feedback (doubtful), it’s a stupidly large effort to try and tweak things that, odds are, the end user can just tweak back in the end anyway. I:B doesn’t have the manpower SC does, and it’s better served somewhere useful, rather than trying to make people who “feel one form of control is superior” feel better because that control system gets…degraded.

After the joystick, I use a xbox controller so good news indeed that both of these will be integrated.