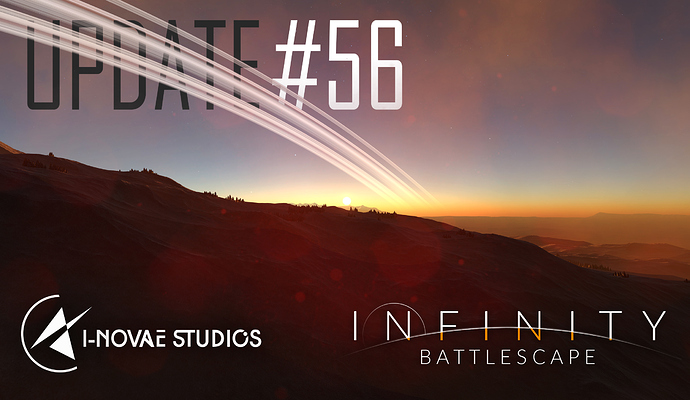 Hey everyone time for another weekly update. As I mentioned last week I’m going to go more into scheduling with this update. At the moment the new networking code is being merged into the game. This is the single most important blocker for the release of the Alpha and once it’s finished Flavien will resume work on core gameplay. I’m continuing my work on the UI and once that’s complete I’ll join Flavien with finishing up the Alpha gameplay and making some additional improvements to the launcher, installation runtime, website, and payment platform. 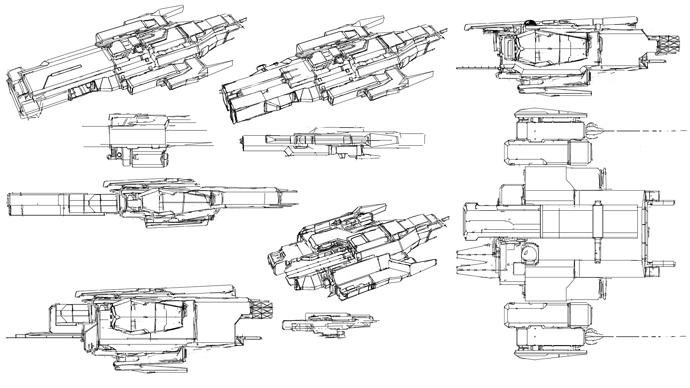 Like we said last week it’s going to be at least 2-3 months before we’re able to release the Alpha and we’ll have one or two, maybe even three more Alpha free-play weekends to make up for the delay. The first of these will occur after we finish integrating the new networking code into the game. This process could take around a month as the networking affects every single part of the game and we have to tear down the game to build it back up. Any intermediate patch would essentially be a version of the game that would appear to be a significant regression from what we currently have though in reality that would be because non-upgraded systems would be disabled. 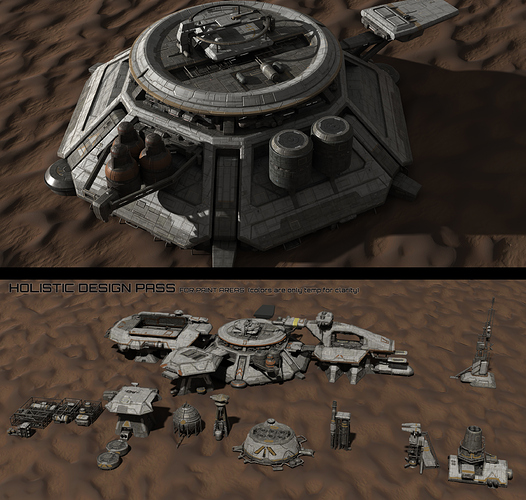 WIP materials for the factory

Once the next patch is released and the new networking code is verified to be working smoothly we expect that Alpha gameplay will begin to rapidly take shape. This will include the implementation of the resource system, capital ships, teams, radar/sensors, turrets, and new weapon systems. After the release of the Alpha rapid iteration of gameplay should continue into Beta. We will be holding multiple Beta free-play weekends during the Alpha, like we’ve done for Alpha backers, to help make up for delays in their access to the game. At the moment, depending on how much time we need for polish during the Beta, we’re probably looking at the game going gold sometime in the summer/fall of 2018. From that point we expect to be supporting the game and releasing additional content for a significant amount of time.

Really looking forward to testing the gameplay! I hope we can get on that soon. Will it likely mean more frequent patches as gameplay develops?

My god those buildings looks beautiful.
And that concept of a carrier. At first i was most fond of the left one. For her sleek shape.
…but then i noticed that runway in the bottom middle one. It looks so unique. It really stands out.
Great job guys.

Will it likely mean more frequent patches as gameplay develops?

Yeah that’s what we’re going for.

… integrating the new networking code into the game. This process could take around a month …

So that leaves 1-2 months for…

Is that not quite optimistic?

We’re talking baseline Alpha implementations of these systems. Think of it as a “minimum viable product” - there’s going to be a ton of additional work to be done on all of those systems during the Alpha. As for the launcher, installation runtime, etc the scope of that work is relatively small insofar as the Alpha is concerned. Once again there will be additional work that must be put into them for Beta and of course the final release.

I have to agree that the buildings keep looking better and better each time.

In the future, a statement of completeness would undoubtedly help set more accurate expectations. This is the sort of thing that I was talking about in another thread, where INS tunes their presentation of information. So while it may be obvious to you that an alpha release with all those systems would be alpha quality for each system, saying

[quote=“INovaeKeith, post:1, topic:5190”]
This will include the implementation of the resource system, capital ships, teams, radar/sensors, turrets, and new weapon systems.[/quote]

doesn’t really convey that sense - as evidenced by @hrobertson’s comment . The key phase there is “the implementation of”, which connotes that this is it, this is THE implementation of those systems. It suggests completeness or finality. Just change “the” to “an” and it’s an entirely different statement. Saying “an implementation of” communicates something far less definitive. Being explicit by saying “This will include an alpha-quality implementation of” would be most clear.

It’s a nuance, but one well worth watching in future statements.

I respectfully disagree with JB’s opinion and call out “nitpicking”!

implementation/ɪmplɪmɛnˈteɪʃ(ə)n/
noun
the process of putting a decision or plan into effect; execution.

I see where you’re coming from, but I don’t agree that Keith is being misleading in any way. As consumers, we understand the concept of Alpha implementation being the first round, and (importantly) version numbers.

We are currently on build 0.1.8, which is obviously nowhere near a v1.0 release. Therefore I propose the devs just emphasise this number for each iteration and let people pick up on the pattern!

Think KSP or Minecraft and how their versions changed. It was easy to follow.

I like the asymmetric design of the top right and bottom left images.

I don’t think anything has been misleading and I knew the answer before i asked the question, but i felt it was important to ask anyway.

See the Gameplay Design Details thread (dev access required) - for anyone without access, don’t worry, the thread contains no gameplay design details… just a statement from Keith that they’re not going to design the gameplay, they’re just going to ‘do it’ then iterate…

My right eyebrow is in a permanently raised position regarding the ‘plan’ for gameplay these days.

Yeah, there are also a few unknowns that still need to be adressed. Like planetary collision meshes on the server side, which I explained in another thread a while ago, which is definitely a challenge performance wise.

The good news is that a lot of the basics of the new gameplay already exists in a form or another. It’s still far from a complete implementation but there are already some of the required things in place. Team based gameplay for example has been partially implemented since the Kickstarter but was disabled due to the lack of active players to fill the teams. That’s why in the current prototype you have players with green indicators and others in red, for example.

Structures already have hit points and could get damaged, but it’s also disabled due to most of it being client-sided and having no damaged state assets yet.

The new weapons are already a WIP in the networking tests, as I explained in the past weeks, I’ve been experimenting with auto-aiming turrets or missiles AI. They don’t have special fx or particles ( being a network test ) but the core of the code is ready to be promoted to the main game.

The web infrastructure is already in place, and while there are bugs to fix, it’s come a long way already. It still requires incremental patching, a couple of smaller features and a visual skin to look professional, but behind the scenes everything is already working. This had to be done anyways before we could do a release, so we decided early that it was better to solve it in the early stages of the project and let it mature / be stable, rather than implement it at the end right before release and encounter unexpected issues right before release which could cause delays.

Basically, if that wasn’t clear yet, our development strategy has been to solve the technical challenges ( with the biggest unknowns, time-wise ) in the first half of the development and to do the easier and lesser time consuming ones ( everything being relative of course, as there can be design challenges too ) in the later half.

What are you even talking about… are we at grammer school? You’re either too smart for your own good or I’m an idiot… and yet, I tend to think neither. idk I must be lost within the context of bs

solve the technical challenges ( with the biggest unknowns, time-wise ) in the first half of the development and to do the easier and lesser time consuming ones ( everything being relative of course, as there can be design challenges too ) in the later half.

As long as you are committed to putting the time into solving those design challenges in Alpha until the gameplay is as it should be, then I’ll feel happier.

My concern with not putting any time into them now is that we’re going to reach mid 2018 and go into beta with whatever implementation we have at that time even if it still needs significant work.

What are you even talking about…

Don’t mind JB… think of him as a wisened old man in a rocking chair on his porch with a shotgun in his lap.
Sometimes he comes out with insightful remarks and you can go and sit with him and have a productive discussion, other times it’s best to just keep on walking.

Get off my lawn.

Wow the factory looks nice! And huuuge (if I got the scale right). Is that on the top picture on the top right a landing platform?

Would it be hard to add some dynamic to the texturing in terms of adding some dirt like sand or dust spots for example, ideally in the same color as the planet is textured with? That might make it look more associated with the surface where its located, at least when its a rocky or sand-like planet surface. I agree it would just be eye-candy, just an idea…

Would it be hard to add some dynamic to the texturing in terms of adding some dirt like sand or dust spots for example, ideally in the same color as the planet is textured with? That might make it look more associated with the surface where its located, at least when its a rocky or sand-like planet surface. I agree it would just be eye-candy, just an idea…

@INovaeFlavien, are you and the team thinking about how buildings can be blended into the landscape?

Considering the factory shown in the first image, I’d expect sand to have accumulated in corners and up against the walls of the building.

Unfortunately I doubt we’ll have the time to do much in the way of graphics prior to the game shipping to retail. The items on our graphics todo list are pretty well fixed at this point.