Please keep in mind i don’t try bash your work. What you do is stellar given the size of Inovae team.

And what i describe can be completely intentional by inovae. It is just opinion, it can be wrong

No need to apologize. That’s exactly the kind of feedback we need :)

Bug with turrets on carrier. Not sure if this applies to all capital ships, but I have noticed sometimes they stop shooting properly, so this could be why. 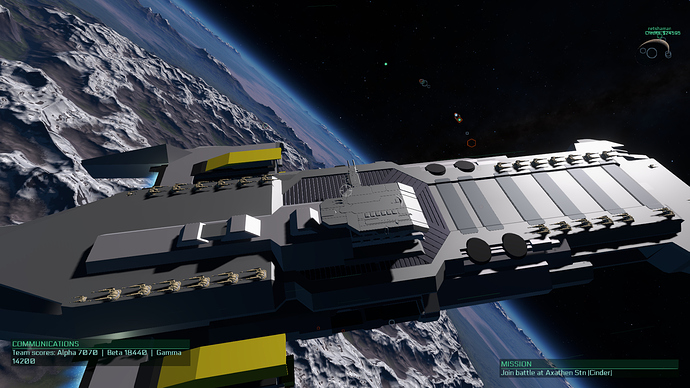 The turrets tracked a target all the way round to 180degrees behind me (so turrets were facing backwards). Turrets all then stopped rotating as the target moved round to the left.
When I deselected the target, the left turrets had the sense to rotate back to forward position (anti-clockwise I might add, following the same arc back as they had originally rotated). However, the right turrets stayed stuck backwards and now won’t fire!

Edit: warping to a new location and selecting a target to my right unstuck those turrets.

Sometimes i can be way too critical. …or word things unpolitely.
Thank you for understanding.

Just played after a week long break. What happened to the interceptor? It’s a lot harder to aim with now (absolutely awful).

0.2.3.0 ( Thursday, 09 November 2017 ) This is an intermediate patch right before our alpha play-test week-end tomorrow ! As such, it contains a bunch of fixes ( including the crash bugs hotfix from last version ) and improvements. A new version with more polishing and tweaks will be released tomororw, so I would suggest to only download patch 0.2.3.0 if your connection is fast and don’t mind to have to re-download another patch tomorrow

Still it would be helpful if a couple peop…

The gimbal for the interceptor that was put in last weekend has been removed for the alpha test. Still there for the bomber.

AI has been adjusted too, and a few other changes!

I never tried it with the gimbal. It might just be the awkward temporary setup I have at the moment, but the interceptor feels far more difficult to aim now than it did before the gimbal was added in the first place.

There really needs to be a “this is where I’m trying to point at” cursor on direct control mode. The lack of feedback is terribad for fast precise movements. And with my ageing computer, some versions (like the current one) have a slight input lag on, which makes this problem much worse.

The direct control mode is not direct control in the traditional meaning of the word, it means your inputs control the thrusters rather than a ‘desired heading’ cursor.

So there is no such thing as a “this is where I’m trying to point at” cursor in direct control mode.

I have long suggested such a control mode however:

Direct mouse input would not control the thrusters, it would control a cursor setting the desired heading of the ship.

It would therefore be 100% uniform, consistent and reliable. […] If I move my mouse x inches, my heading moves 45°, every time, it might just take non-zero time to get there.

I never tried it with the gimbal. It might just be the awkward temporary setup I have at the moment, but the interceptor feels far more difficult to aim now than it did before the gimbal was added in the first place.

When did you last play? Flavien also changed the way direct mode works. It no longer has infinite acceleration but spreads the desired ship movement over more time. This introduces some input lag when and only when going above the ships max acceleration speed.

There has been many more changes though which may have idirect effect on what you are experiencing. Maybe try to nail down what exactly it is. Also try to watch engagement distances and speeds! Due to the new AI the usual engagement has changed. Usually more absolute speed and more distance to the NPCs as they are not always trying to get close to you.

Unaligned turrets often fire, even when the target is completely out of their firing arc (on the other side of the ship). They should hold fire to save energy.

Edit: the “overcharge weapons” is a bit awkward: it is great to maximize DPS whith a full energy bar, but once it is empty it is counter-productive, as it slows down the recharge of the energy pool and therefore hurts the DPS pretty badly for no benefits. I suggest to deactivate it (for faster charging) when the energy is depleted and reactivate it above a threshold.

In addition, it stops shield charging even when not firing, which requires fiddling with the menu for switching in combat

I love, LOVE, the added full 6 axis control in warp. It is so liberating. It’s like playing a fully Newtonian game all over again … but this time freely fling between moons instead of asteroids in a ring. It’s great. It also fixed a minor bug with the previous version (had some kind of lateral control but only when accelerating and only in one direction of the axis).
This addition has allowed me to increase my travel speed immensely, increase my land precision and do cool stuff like drift around a moon more easily. Definitely pushed up the skill ceiling, like it a lot. Even wishing for a “Auto-Assist” off mode (no speed select).

Limit warp however you want … where to warp, when to warp, how fast to warp. That’s all alright but lateral control is just amazing … please give it a hard thought what other options there are when there’s a conflict with how the game should behave before axing the feature.

New AI is interesting. A lot more movement play. There’s a lot of stuff that could be done but I think the AI is already farther than I would have though possible at this stage. If Flavien wants to improve it I could investigate more. It’s a rather complex topic though and I’m going to leave it for the future.

I’m going to drop my biggest concern now. There are a lot of situations where the limitation of the Netcode show at the moment.

Last time I seen these numbers were, I think, on Wednesday, the server was loaded and there was a lot of teleporting ships. Flavien noted that it may be the server overloaded due to the new turret tracking code.

Maybe that’s fixed now but my ping numbers stayed about the same. Teleporting was less the issue but I was able to see following effects:

I’m ok with the netcode. It does its job. One could now change gameplay to more fit the limitation … or just ignore it and have players with a higher ping experience these drawbacks. I don’t know. I gave it some leeway but it was quite jarring. I would accept some of the issues if the gameplay would really make use of all the potential the gameworld has. (Moving battlescaps, chases, long range (visible and maybe fast) engagement, hit and runs).

I was able to do my hit and runs on large targets and beside that one time I hit, what I guess was, the future position of the cruiser, it mostly went without a hitch.

There is still an issue displaying how warp operates on the player’s screen (regarding entry/exit speed). I would attach pictures, but I’m on my phone!

It might make it more obvious if the standard speed indicator freezes (perhaps changing colour). Then the warp speed could be displayed on top of it, or to the side in its own way (even if that’s just a blue bar above the frozen normal-speed bar).

Collisions are really wonky. I did a lot of close fly-bies of capital ships this weekend and it happend quite offten that it looked like I passed the ship but then collided with an invisible box. I was going between 1 to 2 km/s. (Hit and runs)

That’s not the netcode, that’s the physics; everything is done with bounding boxes. It’s not an issue with small ships but with the large capital ships ( destroyer+ ) when you’re flying close to them with a small ship ( interceptor ), you will definitely hit the bounding box while you’re still dozens of meters away from the actual geometry.

This will get addressed at a later stage, probably between alpha and beta.

The game really badly handles the instant deceleration when dropping out of warp. There’s always a jolt when you get teleportet back.

This should be a relatively simple fix.

Sometimes weapon fire hits target ship but does not register. It doesn’t happen often but it is noticeable. I would guess every 100th hit.

This is not easily fixable. Due to the randomization in the latency, it can happen that you hit on the client but miss on the server, or vice-versa.

The switch from low update rate to high update rate is a little jarring. Maybe more steps in between would help … maybe there are no steps but currently it is quite annoying.

The #1 issue there is when a ship jumps from just being an indicator, to being a full fledge actor. Indicators atm are updated once per second. Actual actors, depends on many factors, including size on screen, distance, threat level etc… So it’s definitely possible for a ship to jump from 1 update per second to 16 updates per second or more - which will make the ship quickly jump around. More work is needed on that part of the game, but it’s probably fixable.

What does everyone think about slowwarping? By that i mean the ability to stay in warp at speeds well below 1000m/s and near instantly accelerate out of any trouble because you do not need to wait for the warp drive to charge as you are still in warp?

You cannot fight while in warp, so currently there is no value in that. What do you use it for?

In my opinion warp should be limited to higher speeds but that’s not an issue ATM.

You cannot fight while in warp, so currently there is no value in that. What do you use it for?

You should try it. You can use it for many many things in combat.

As I said somewhere. It’s not inherently bad. They need to decide if they want that. It makes certain maneuvres a lot faster.
You can drop right on top of enemies.
You can change your out of warp vectors direction really easily. Very useful for hit and runs.
If you have the energy you can decide if you want to engage or not.
You can change position inside of the battlefield to any other position in less than 10 seconds.

First should be decided how people should engage and travel to places. When they should be allowed to, what they need to do to be able to etc etc.
Then the warp system can be designed to fit that goal.

You can drop right on top of enemies.
You can change your out of warp vectors direction really easily. Very useful for hit and runs.
If you have the energy you can decide if you want to engage or not.
You can change position inside of the battlefield to any other position in less than 10 seconds.

I do all that at 1-2 km/s. Granted, I need to circle a bit longer but it lets shields recharge for the next pass and I can dodge enemy fire.

You can drop right on top of enemies.

This! It makes engagements much faster, no need to wait 5 minutes to finally get to the enemy anymore. Just slow warp towards the target.
I like the slow warping, +1 for keeping it.

It’s an exploit basically, instead of skillfully navigating out of warp, you hit a button.