Hey Everybody, Flavien again for this week’s update as Keith is still away for a few days. This week’s been a bit slower than last week, but I’m wrapping up the networking tests. The last piece missing is bandwidth compression which was broken some time ago and which I need to reimplement. I’ve also spent a few hours playing with some minimalistic A.I. for missiles and auto-aiming turrets ( which will mostly be used on the corvette, capital ships and defense buildings ). It seems to work pretty well so far, despite having to solve a quartic equation (!) to anticipate where to aim projectiles at, ahead of the movement of the target’s. Who said programmers don’t need to be mathematicians ?

Jan finished to render the small ships promotional clips, but still need to edit the final videos. Meanwhile he’s also helping Dan on the destroyer design. Hopefully we’ll have something to show you in the next update. 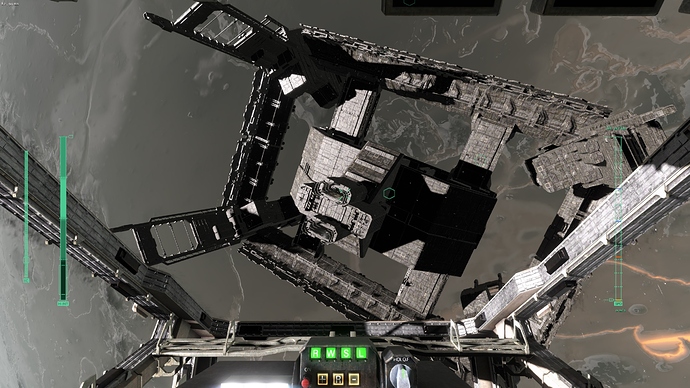 Kristian is working on more factory module assets. He completed the biggest / most complex ones so far, but there’s still a handful of smaller / simpler modules that need to be done. You can see in the following pic some of these modules. 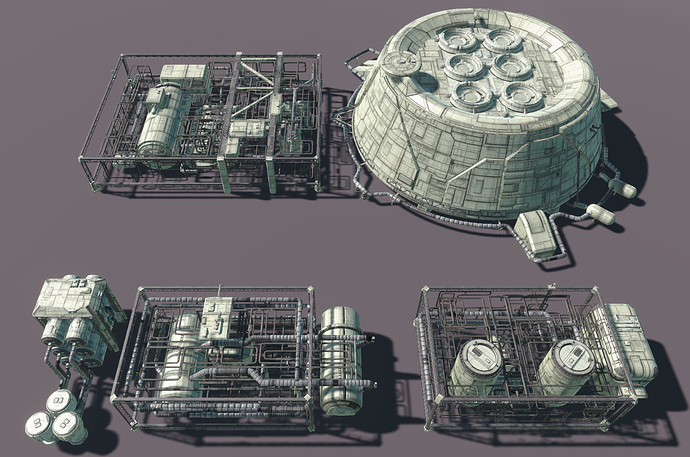 See you next week with another update from Keith !

That first image…it’s like Blade Runner, Mechwarrior and Dune had a baby. You just need some huge gas flare stacks and you’re sorted.

Loving the feel of that first image with the HUD!

Isn’t all that piping/greeble very expensive to render? I understand it’s the SFC style but it seems the amount of pipes in some of those modules is borderline excessive… @INovaeKristian?

These are modular pipes installed by robots, having a pipe shape that modularly fits onto multiple refining stations saves production cost and simplifies maintainance, because you can use the same part in multiple places. The modular refining station is build by first installing the outer frames which are modular too. After anchoring the outer frames the main tanks and filtration stations are setup in the best and most effienciend order that was calculated. This is based on the composition of the raw material that is excavated or pumped from the area. After that the main piping connecting the modules is installed. Based on the outer temperatures and radiation levels additional cooling/heating piepes are installed and connected.
What you call greeble is a work of art, created by generations of miners and scientists. Without it we couldn’t even fly to the next star, nevermind starting the quest for (another) earth.

factory awersome, one of update which increase my interest.

Fab update! Love the concept picture with the HUD. I haven’t had a chance to look closely yet but I absolutely adore the overall appearance. It’s unobtrusive, but looks like it still conveys the information. I like the way that the real scenery behind is still clear and visible! Thin lines = good!

Also, yay auto-aiming turrets for the corvette! Will they have certain arcs of fire depending on hardpoint locations? It will be interesting to see how well they match up to manual aiming in the smaller ships…

I think i found an interceptor in the first pic!

Isn’t all that piping/greeble very expensive to render? I understand it’s the SFC style but it seems the amount of pipes in some of those modules is borderline excessive

lol I was thinking the same exact thing. In Empyrion they include tri-count as a thing, and pipes and pretty much any curved surface takes way more tris to render compared to a flat surface. I mean I know they probably plan to implement LOD, but it doesn’t look like he is doing anyvisual tricks like wrapping a pipe looking texture around a flat surface and playing with the normals to generate fake pipes.

Don’t get me wrong, I absolutely love that rugged industrial look it gives, but at the end of the day, stuff like that will need to go if it affects performance as heavily as it seems to in other games.

Also what is the expected tri-count for both the small fighters and larger corvettes going to be in near space? we looking at 100-200k?

I made that comaprison a couple updates ago lol.

Excellent stuff all round, can not wait to see in-game.

yeah, its definitly an interceptor.

The smaller pipes are alpha mapped, not geometry. And everything has LODs.

I should’ve guessed from them all being arranged in planes.

It seems to work pretty well so far, despite having to solve a quartic equation (!) to anticipate where to aim projectiles at, ahead of the movement of the target’s. Who said programmers don’t need to be mathematicians ?

I know what you are talking about, “Who said programmers don’t need to be mathematicians ?”, lol

I am currently trying to implement my own “Sandbox environment” within Unity for my procedural engine prototype in double precision, having the code itself complete independend from Unity-classes (so that eventually I can move on with this code later outside Unity). Progress is pretty good so far, most of the base classes including EntityBody (a type similar to Unity’s GameObjects), a new Timer, Vector3d, Mathd, Quaterniond are done. However to complete my Transformd implementation I begin to have to deal with some essential matrices operations for functions like RotateAround, TransformDirection, InverseTransformVector etc. I don’t want to fall into the trap to reuse something done already but try to remember all that I once learned during my math courses in my study

Especially as I feel it being fundamental for my goal. So yeah, I am happy for everyone who has a stronger math background than me

I’ve also spent a few hours playing with some minimalistic A.I. for missiles and auto-aiming turrets ( which will mostly be used on the corvette, capital ships and defense buildings ).

Fun topic. I changed my mind on this when I tried to implement a physics based autopilot for a spaceship. Hands down for everyone who is doing autopilots for rockets or planes in real life! More difficult than I thought. Do you manipulate the direction of the missiles by adding forces to its physics body, or do you directly manipulate the velocity and rotation of the object? I guess the last, everything else might be a bit too much for missiles…

Nice screenshots!! The game is coming along pretty well visually!!

have you found the interceptor?

The HUD ohhh pretty thin lines.
I like how you guys progress…yeah slowly, but steadily.
You guys will be grand one day.

Keep up what you keep on keeping on.

On the right. But did you notice the ship on the left under the Xenomorph marker?

I find Waldo much faster