Has anyone else given any thought towards using a controller in Infinity?

I’m currently using re-wasd to remap my controller. It actually works pretty flawlessly, however, I’m having some trouble locking down sensitivity when it comes to pitch and yaw. I’d also like to change around some things to make it more efficient, if anyone has any tips on button placements and mapping… please let me know! Attached will be my current setup.

I suppose I can get used to it, but it seems I can’t find a happy middle ground at the moment. For now I prefer slower rather than ridiculous fast, but it means maneuverability takes a bit of a hit then.

What can I say, I like gaming from a couch 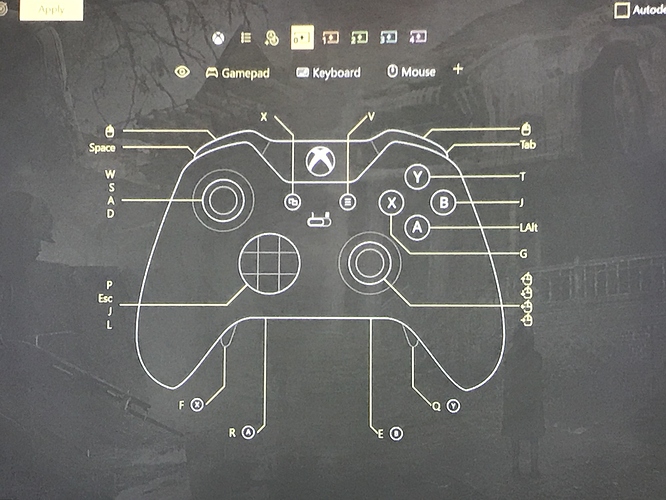 @INovaeFlavien just did some “tests” lately playing infront of his TV with a gamepad. So he surely have given it a certain ammount of thought.

As far as I know you should be able to use a gamepad without any need of external tools. The in-game bindings menu should be sufficient. There also should be profiles ready made but I am not sure about that.

Sensitivity can be adjusted, what you mention though is limiting I think. You would like some of the axis to not go to 100% as to make the rest of the travel more precise with the tradeoff of not using the ships full capabilities.

Also. If you use the ingame menu you would have analog control! That should solve some of the issues you have.

Hop onto discord if you want some help: Infinity Community Discord Server

There’s an in-game XInput profile for gamepads, that’s the one you should use. It’s fully playable minus the menu which still has shenanigans.

The button A is used as an “alt” mode. You can strafe by holding A and the top-left stick. X selects the target at screen center, while A+X selects the closest threat. Y and B are used to increase / decrease throttle. The crosspad is used for all extra ship functions ( comms, weapons, systems ). The left shoulder is used for chaffs and the right shoulder to launch a missile. Finally, the top-left stick “button” is used for boosting and the bottom-right stick to look around. That’s pretty much it in a nutshell.

Adjusting the max turn rate to get more precision on joysticks / gamepads is something that crossed my mind. Maybe the setting could even allow to go higher than the default limit for those that want to turn faster ( but the ship’s rotational acceleration would be identical for everybody, so if you increased the turn rate you’d have more difficulity stabilizing your aim ).

Nice! I’ll have to check it out when I get home. I didn’t even think to check, I figured everything would work better externally. I’m too used to Star Citizen haha