It has come to my attention that surprisingly enough we don’t yet have a thread to share our nefarious Kerbal activities. Want to share Jeb’s latest daring adventure? That failed catastrophe that never made it off the launch pad? Here’s the place to do it! I’ll post some of my own albums/stories when I get home.

Also, how do you post an album from imgur on here?

I’ve sent probes to every planet(not every moon) except Moho. However, my unique playing style called installing-tons-of-mods-to-make-the-game-realistic-and-in-depth does not agree with my computer’s limitations (AKA tons and tons of lag), so I have stopped playing in earnest until I can build my own.
Edit: I just realized the irony of this situation- Wheatley(my avatar pic) being able to do interplanetary transfers.

Haven’t played for a long time … though enjoyed every second …

Nice trailer.
I haven’t played since the last update. - They added money which was an important part of career mode, but the contract generation system is so bad it’s ridiculous. - I got bored of the contracts and haven’t played it since.

Mods I use are: FAR, RemoteTech2, TAC life support and various others.

There is a mod called fine print that fixes a lot of the contracts and adds a lot of better ones such as putting a station into orbit, or landing a rover and driving to separate waypoints.

I always used way too many mods…but the notable ones are FAR, DRE, B9, RT2, and many others as well. I still can’t figure out how to post albums like you can on the ksp forums…the [imgur][/imgur] tag doesn’t work for albums unless the syntax is slightly different. 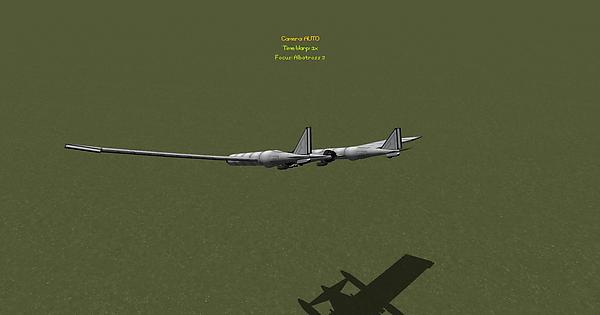 Just paste the lik to the album:

For some reason my Opera Browser blocked it though (as if it were a popup). After allowing it it showed correctly.

I’m just getting a blank white space where it doesn’t show at all. I’m on mozilla currently. How did you allow it using opera? I just tested chrome and that doesn’t work either. I don’t have any sort selection to interact with to right click and attempt to allow. 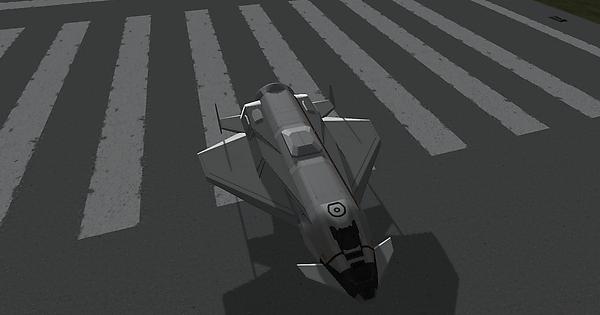 Edit: Quick description of the album, I wanted a sweet vtol that fits into a cargobay and this was my solution. This has vtol engines inside it and it can easily make orbit and return to fly around for quite some distance. It uses infernal robotics for the hinges on the wings and pWings

After I posted the post the tread updated and a popup warning showd up at the rigth side of the superbar. There I could just click it and allow popus for forums.inovaestudios.com

I’m able to see your album.

Weird. I’ve added these forums to the exceptions and I’m still getting white. There was never any bar that came down and gave me the option to allow popups for the forums either. I’m off to troubleshoot

Edit: Ugh, found it. it was hiding in the address bar for whatever reason. I hate new browser updates. Thanks Lomsor!

Double edit: At last I can spam this thread with my albums of my favorite spaceships

Ahh, the old KSP thread, it’s about time someone brought it back. First heard about KSP on the old Infinity forums back in 2011 when the game was free, fun times. 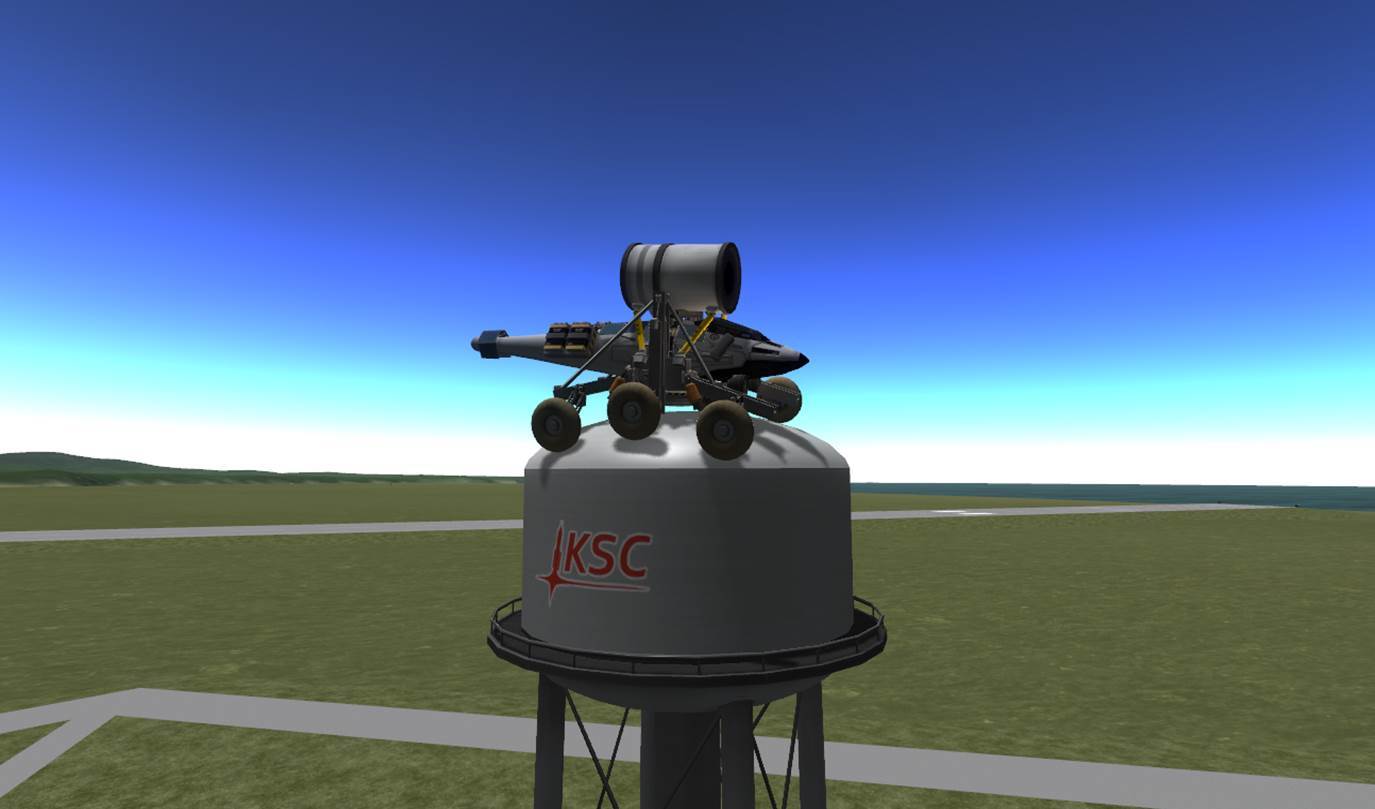 My rovers are a lot better balanced and more manoeuvrable these days.

I’ve been looking for rover designs that appealed to me aesthetically for ages. Thank you naiba I have a starting point for building my rover fleet now

A fleet, you say? 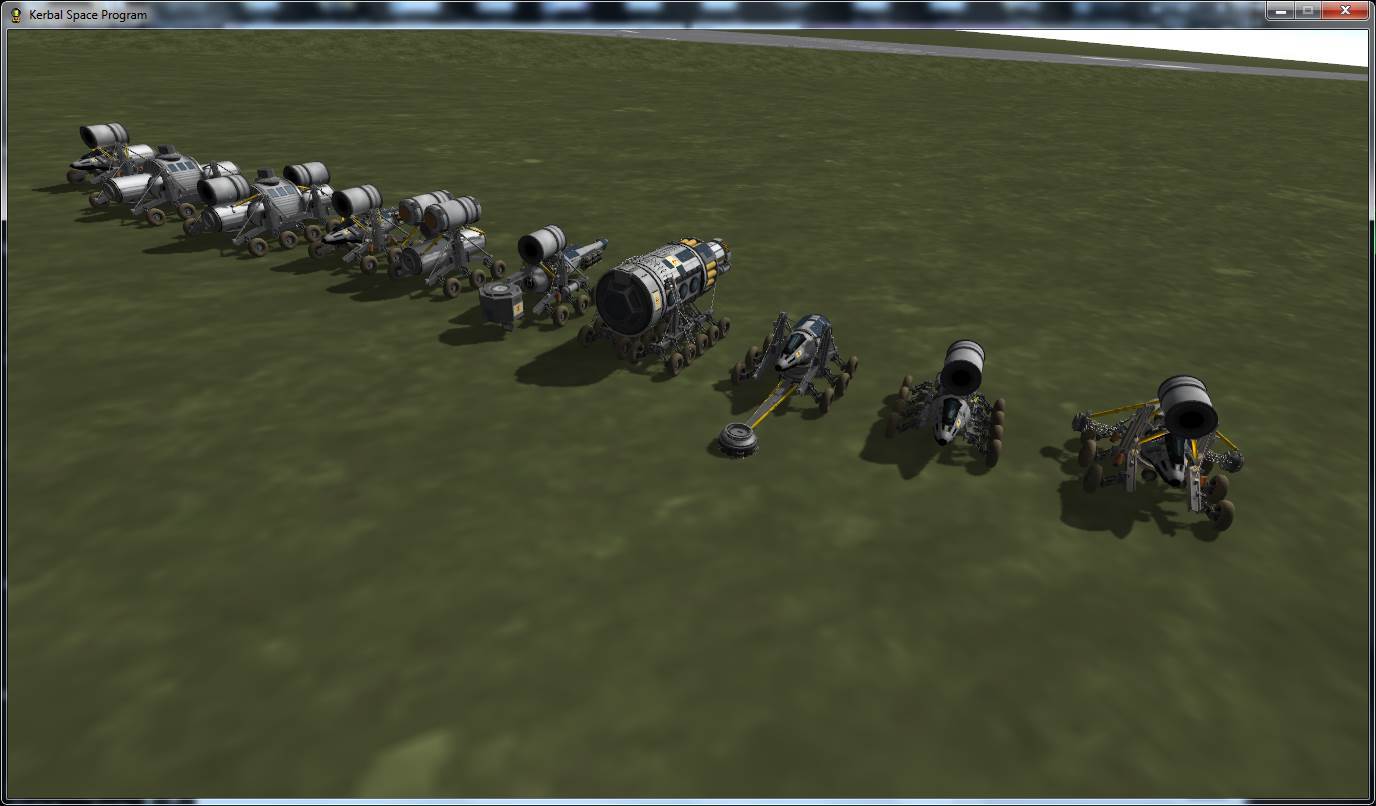 BTW, this is how I reacted when I first got KSP.

After accepting a contract to save Corbald Kerman from orbit(The experts still aren’t sure how he got up there) the higher ups decided this was a perfect time to test a new SRB in orbit as well. To accomplish this task in the most economically efficient manner the engineers whipped this spaceplane up in no time - The Dodobird. 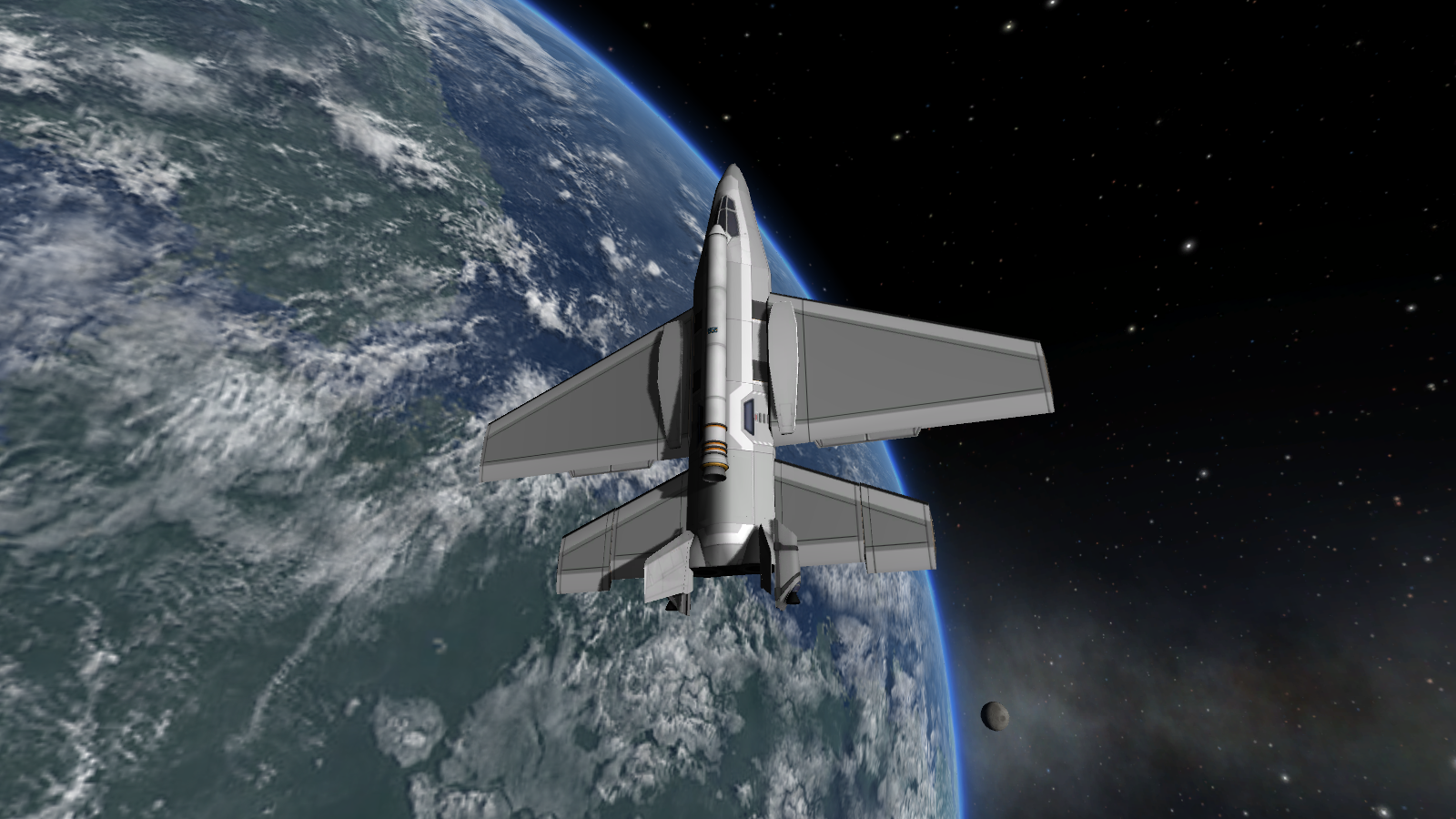 On it’s maiden launch, and test flight, the dodobird ascended beautifully into the air with what seemed like a standard launch profile. All was going fine until about Jeb and Bill reached about 20 km in altitude and suddenly their jet engines exploded from overheating! Jeb, unphased by this minor inconvenience, promptly switched to their rocket engines that weren’t meant to be activated until they had reached a much higher velocity.

This turned out to be life saving because they happened to be over an ocean when the engine-out occured. Because the engineers forgot to install an abort system, it was better that they went to orbit to attempt a glideslope reentry straight to the landing strip.

Once successfully in orbit, Jebediah plotted an intersect course with Corbald. These kerbals have to worry about snacks, oxygen, and their waste products so rescuing Corbald in a timely matter was extremely important! Not 1 hour after launch, the dodobird had successfully rendezvoused with Corbald.

After completely overshooting ksc and the pilots reached the point of no return after attempting to turn around at high speeds, they decided that they would glide to the next landmass and hope the best for a flat landing space. En route to a small island many kilometers past KSC the two pilots heard a large explosion and realized that they had lost their nosecone of the aircraft. They flew on because they must and eventually had the small island in sight. As they descended through the clouds they remarked on what an incredible flight this was, and, if they lived what they would name the island. Hundreds of meters they were performing S-turns to decelerate as quickly as possible, for these kerbals have not yet unlocked the technology of airbrakes! Not far long after, they had first wheels touching the ground and applied the brakes! The plane continued to glide and brake for several hundred meters before slowly settling to a much welcomed stop to the two pilots. 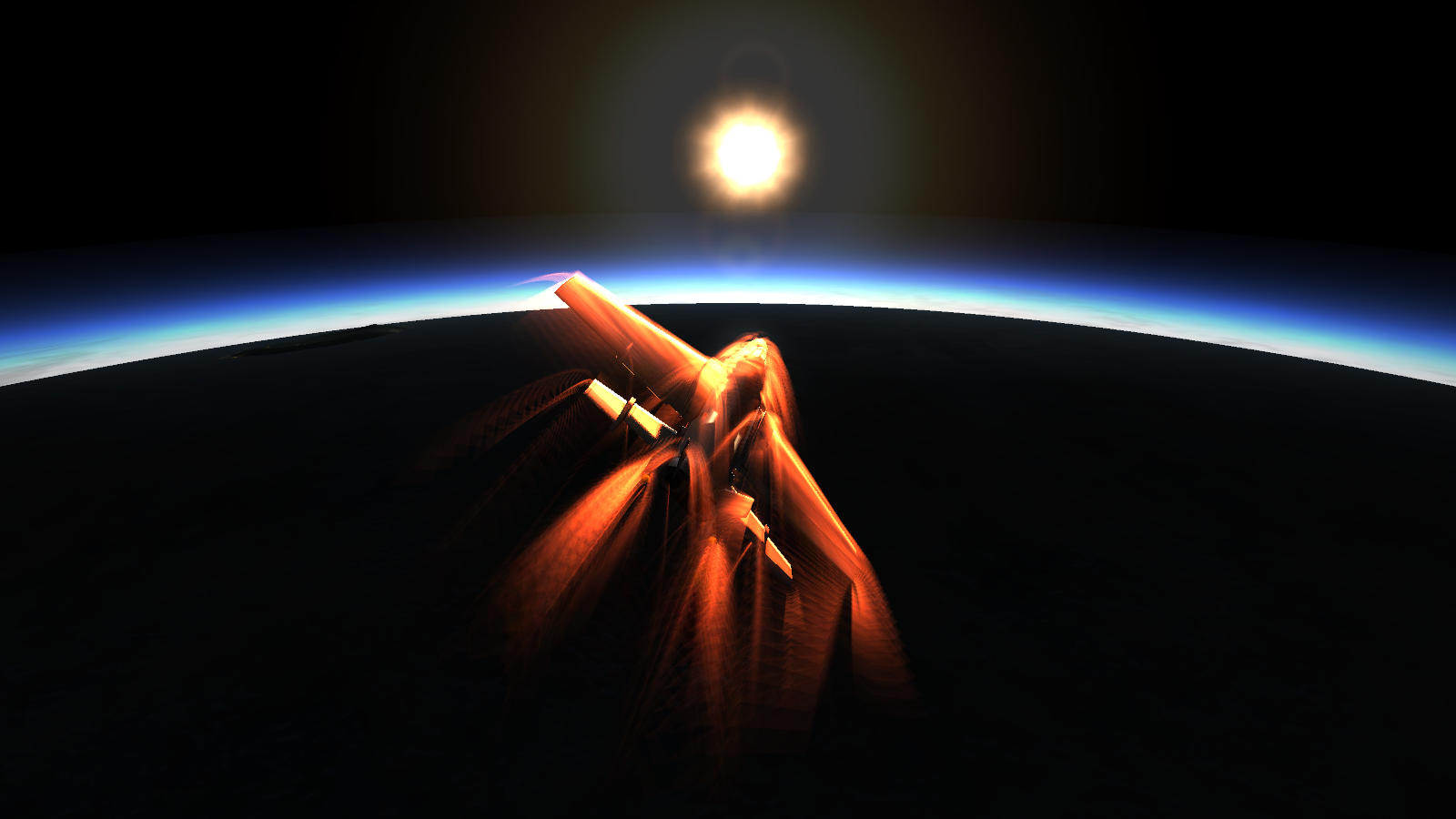 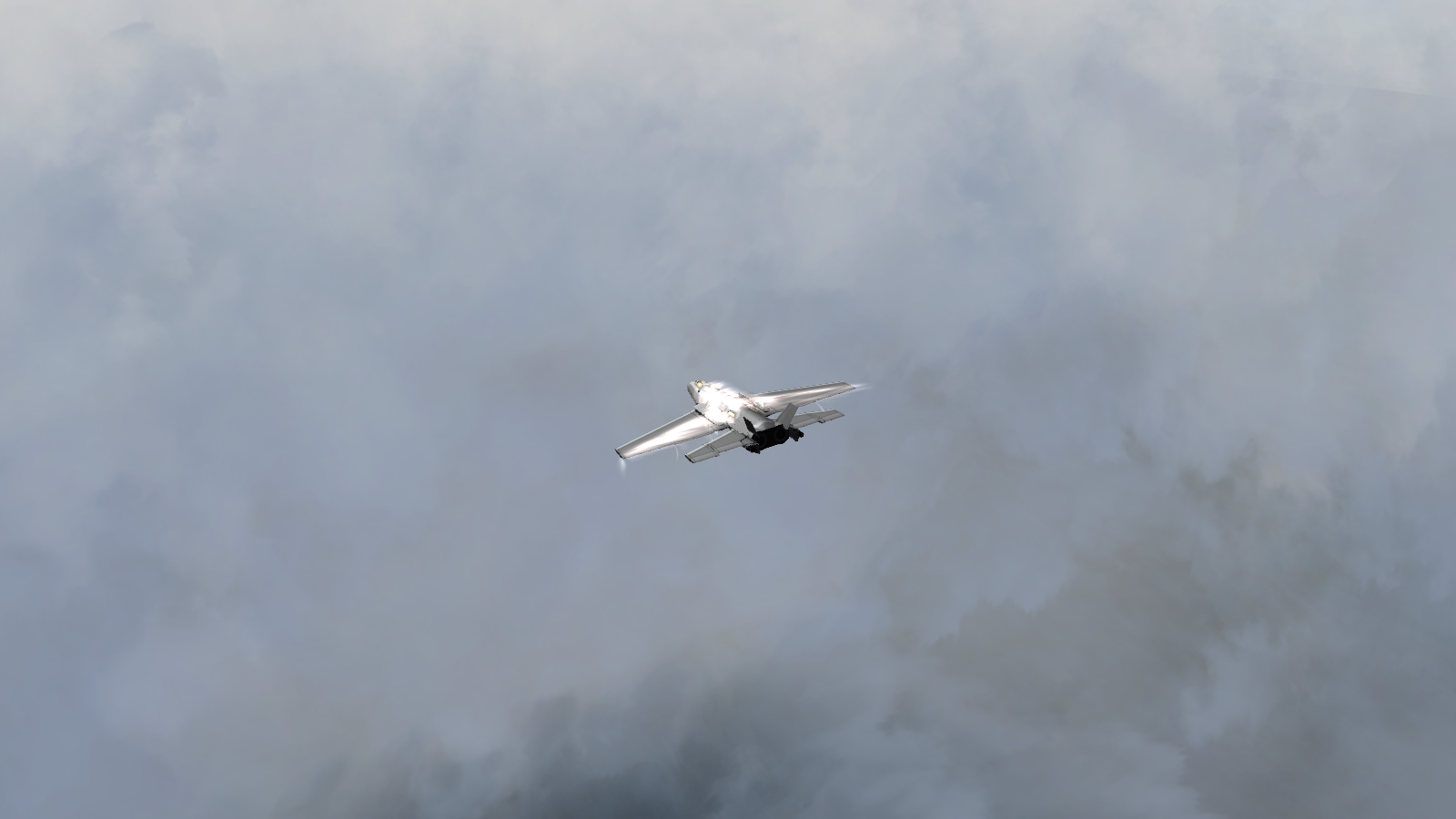 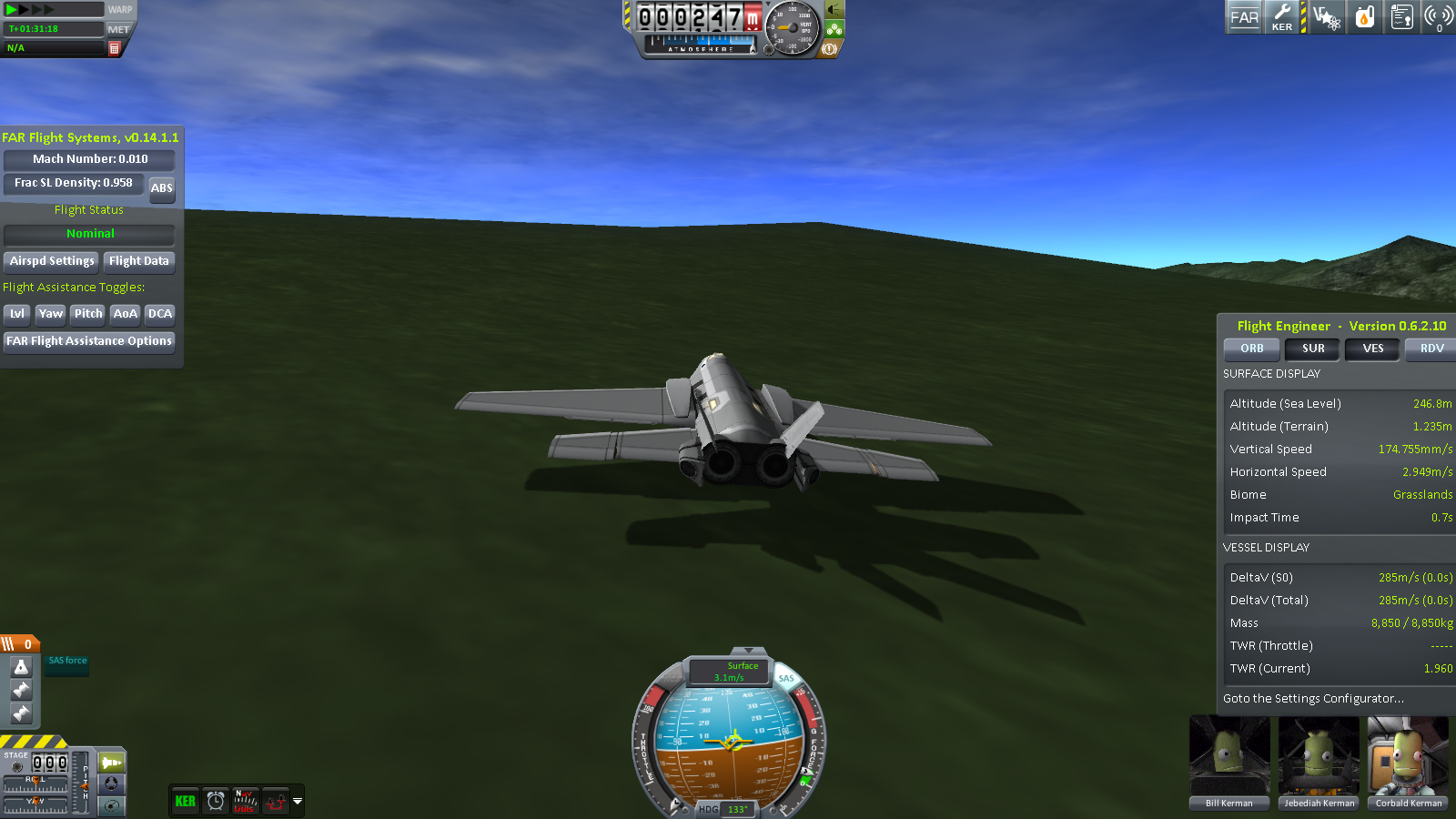 If you are interested, the full album is here: 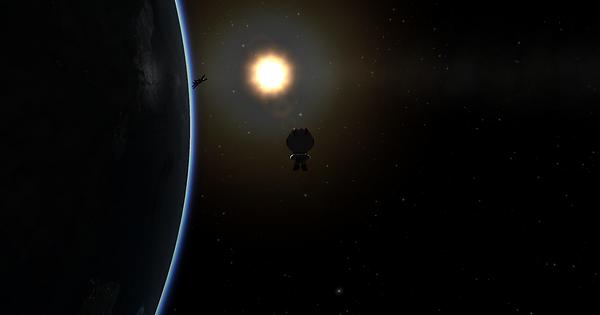 The management in Kerbal Kommand(Abbreviated as KK from now on) has decided that they require more science in Kerbin orbit. They demand that our agencies perform an experiment on plant growth and with prograde kuarqs using station science! According to mission control, the mission plan will go as follows(hopefully):

Jebediah fearlessly accepted this mission without a second thought to bad had. Little does he know, or care even if he did, that the engineers have still have to get around to making a proper abort sequence.

So here’s a picture of our station core and launcher - Aptly named, the Station core launcher! 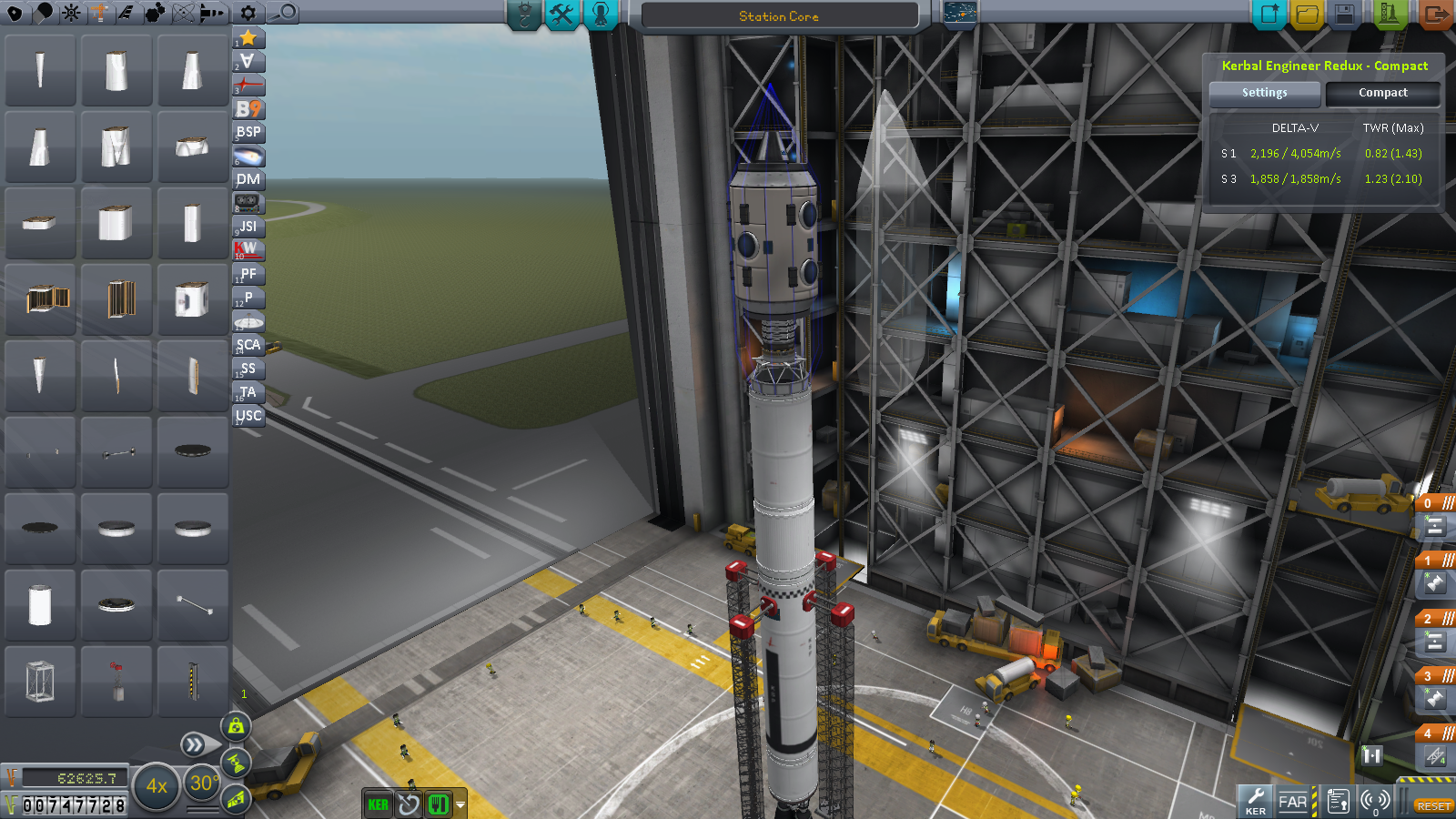 The ascent came and went with no fun surprises 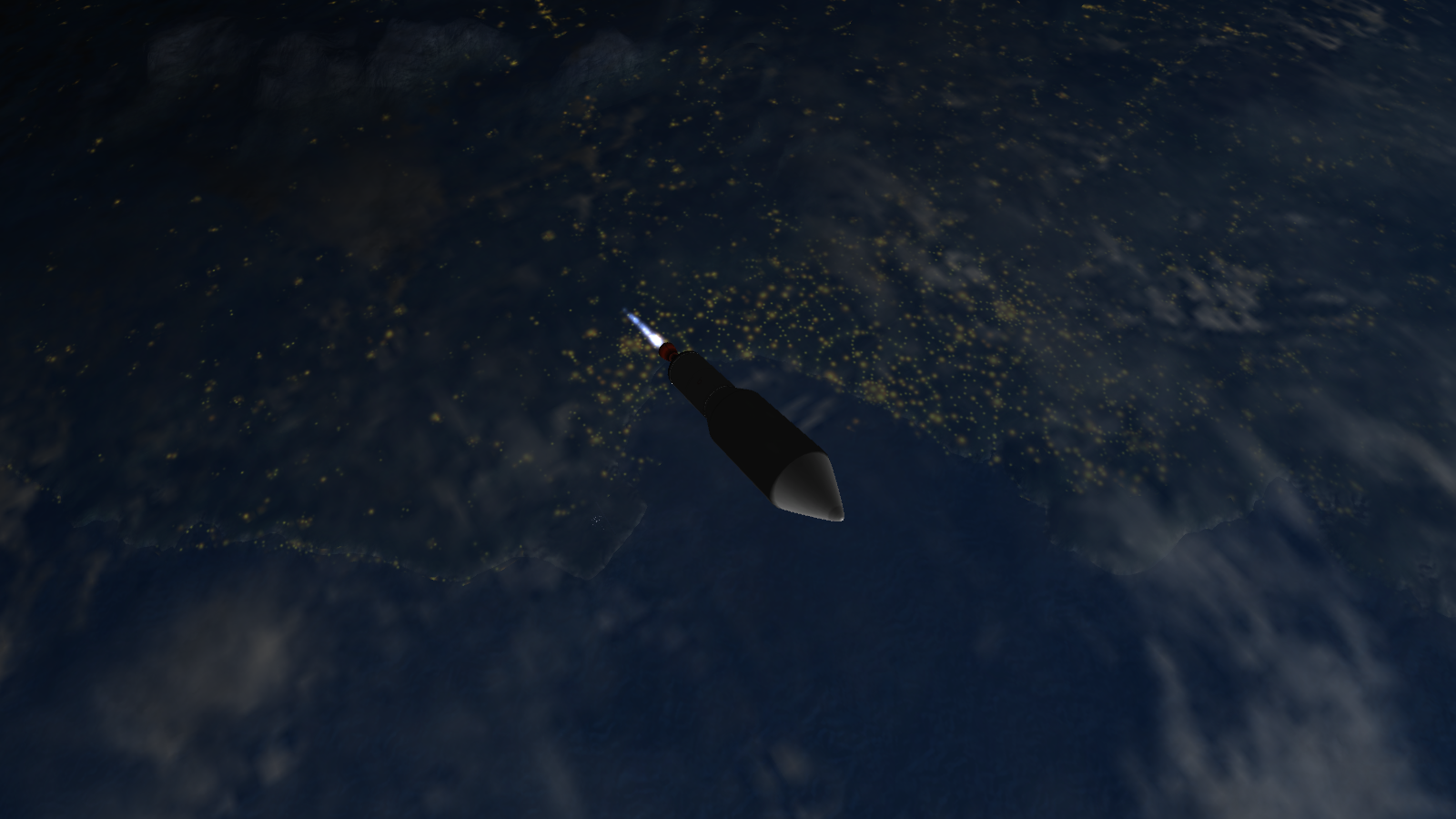 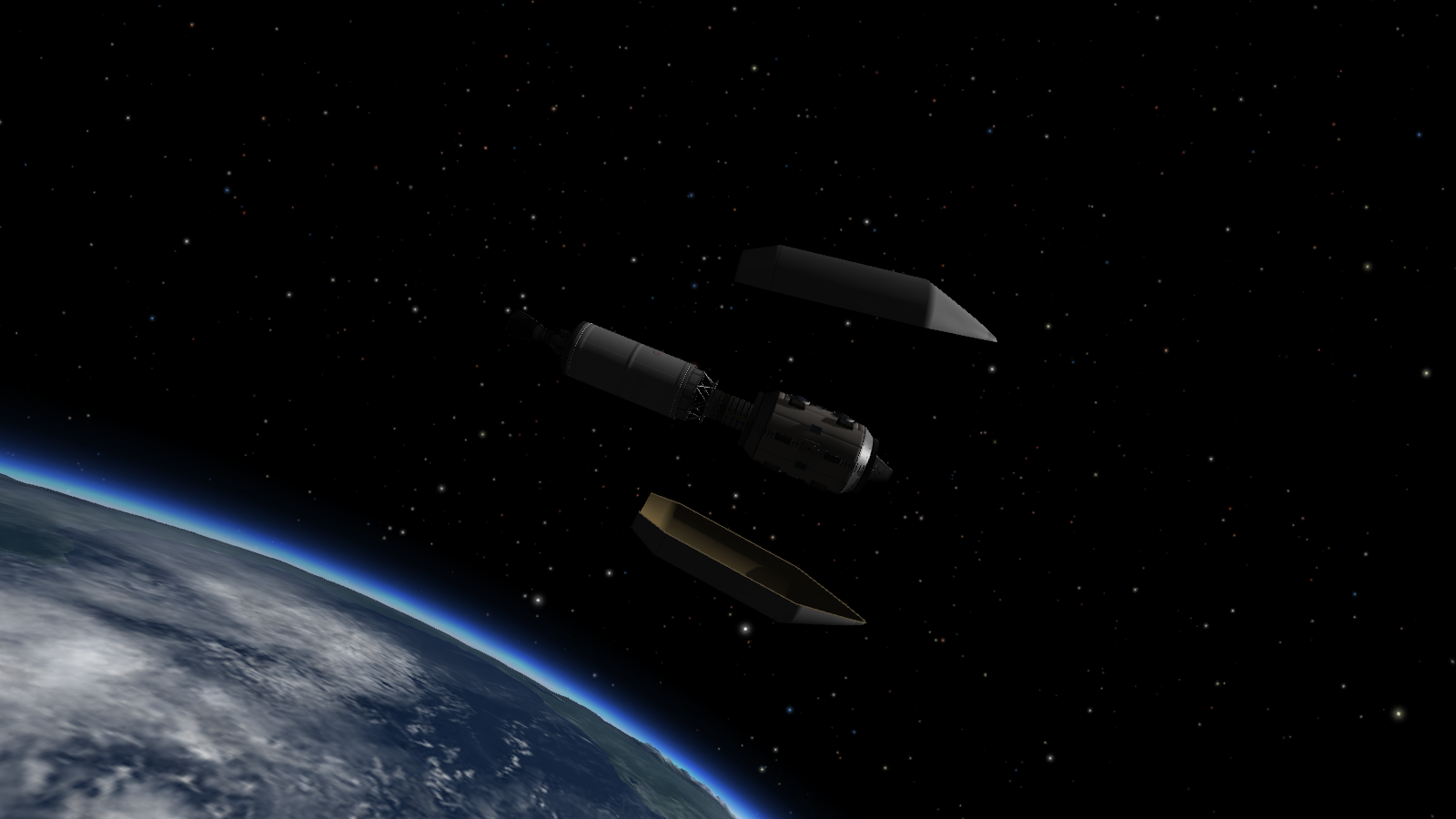 SpaceLab2021 successfully reached its 80km x 80km orbit. Unfortunately, the engineers didn’t put a probe core, or an antenna, on the spent orbital propulsion module. Due to KK needing space internet and a constant connection with all robotic probes, the effort was deemed too much to deal with it.This means it’s due to drift in almost the exact orbit and poses a possible future risk for our brave science loving kerbals. “We’ll worry about it later,” said KK and not a single hoot was given. 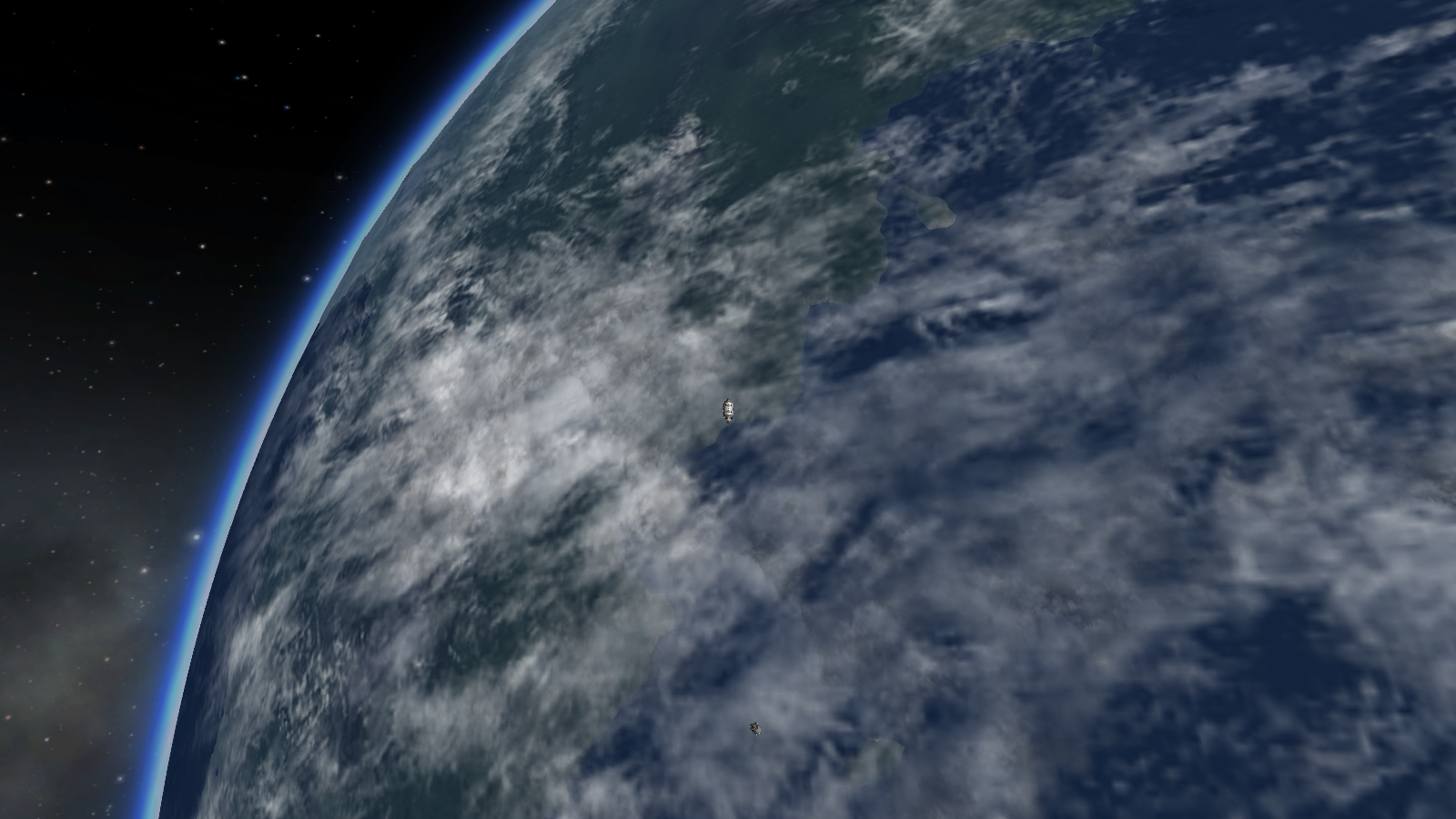 For now, Jeb alone sits and contemplates his fate in his command pod waiting for further modules to be launched and docked. Nobody knows for sure exactly when this will happen however. KK has been known to jump from mission to mission.

So I wrote up my last post after more than a few drinks last night, and I have to apologize for having less stuff go wrong and not being as entertaining while sober. That being said, spaceplane launches are usually always more excited but I haven’t unlocked the bigger parts yet. I need a few more parts before I can start attempting Mun and Minmus landings and those ought to be eventful. I’m also playing with quite a few mods(including some realism) so that always makes things interesting as well. Hope you enjoy!

Edit: Also, I love KSP and orbital mechanics in general. If anyone has any KSP related questions on building craft or even fun ideas for missions(I’m open to everything but I do have plans to start Munar and Laythian colonies in the future. I intend to get a few colonization mods that will make this easier on me life support wise as well).

This thread is making me want to buy KSP…

I don’t see any reason why you shouldn’t! The solar system and many many planes( I like planes) are in your hands…Here’s one of my favorite planes that I’ve made

It’s not shown in this album, but it’s also VTOL capable…I’ll remake something like it whenever I end up doing a colony mission for this save.

Am I the only one that can’t see the albums?