From my experience now with talking with a ton of new players during the Early Access launch I slowly get quite a good grasp at all the little unintuitive aspects of Infinity:Battlescape.

(Also, here’s a past post of me talking about this topic in general: Intuitive, Tutorials and the new player experience)

After some thinking about this I came to the conclusion that I think I should suggest following.

You know that sound and error message that appears when trying to warp but not fullfilling the requirements. Yes? “Duh, Duh, You need to go at least 240m/s!”

Put that on everything. Everything!

Weapons out of ammo and trying to fire. Restock ammo!

Weapon currently reloading and trying to fire. Wait for the indicator.

All weapons destroyed … weapons still traversing … and so fort and so forth. (Those ones ar a bit harder.

I think the situation with warp shows that this has worked the best. We had tons of people ask about how warp works. … now … almost no one. The game tells them if they do something wrong.

I think there should be two priorities:

Priority 1: Sound and Warning
Happens when someone tries something that has no effect currently
(Examples are trying to warp)

Priority 2: Only warning
Happens when someone tries something that has an effect but is not optimal
(Examples are going fast without warping)

Firing your interceptor while not having a target selected or not firing at the lead indicators.

This might get annoying with time … might allow for these to be switched off in the options.

But if you’re in formation with a friendly does it make sense to engage an enemy ? At which point does it automatically break out of formation ? Are you going to dogfight the enemy while your ship is still making you fly sideways towards your formation partner ? Or does it break… when you fire ? I’m just not sure how it’d work in a nice, non-confusing manner.

Formation modes are currently very confusing and not so intuitive. You pretty much need someone explaining to you how it works. Why? Because there is almost no feedback of what is going on. There’s the “Follow” icon (nice icon by the way) and it is shown in the system menu. That is not really functional like that.

Generally. Feedback and info warnings is what seems to work best to inform new players. The warp mechanic is a good example of what works there.

Additionally. Currently the formation modes are only good for flying around. That also confuses people because the game is about fighting. I think having separate targets for shooting at and being in formation in is a must have, else the feature is pretty much useless and can be scrapped.

As for the UI, in addition to the little formation icon and message in the upper right, it could say the name of the person / ship you are locked in to formation with, in case you forget. Also, the fact that it doesn’t cancel on re-targeting would have to be covered in the tutorial.

That is already quite a good addition.
What is also needed is that all the controls that do not work in this mode to either:
A: Break the current formation.
B: Inform the pilot that what he just tried to do has no effect.
Both of them need feedback. So it needs to be obvious and audible that formation has just been broken by my action or that my action had absolutely no effect or an effect.

Manual strafe controls should not break formation. Most people, when they start out, don’t use any higher speed setting then zero. They are used to something happening when they let go of the controls.
Breaking formation due to distance should also happen. That is more tricky though. I see that the game does that already though and also displays a big warning about that. Great!

I also suggest showing the formation mode in “THR” white space that usually shows the speed setting. “FIXED” Will be a bit confusing but I think that’s acceptable.

One must have thing. Additionally to maybe the target info on the top right, is a specific HUD change on the formation leader. Colour Change … anything.

I also think that the formation buttons and radial menus options should not just switch the mode but also be able to be pressed again to change the formation leader. So if someone always only uses orbit. He can bind that and use it repeatedly.

Bonus for showing the configured distance

Some further suggestions to make life easier for new players.

The keybinding menu:
The binding aren’t always self explanatory.
Certain event names should be renamed, it would also be helpful to include tool tips for each event.
The important “must-have” events should also be marked somehow, maybe by having the event field in red or something.
The event names should also be translated, its hard to understand what each event means, its even harder when you are a non-native speaker and unfamiliar with words that aren’t exactly standard vocabulary.

I agree. There needs to be an obfuscation layer. It’s ok for them to be named like that in the XML and for the game, yet there would be better options for some. And yeah. Could use these names to be translated.

What springs to mind is “Ship XYZ”. People not knowing the Axis will waist a few minutes trying it out or extrapolating from closeby bindings. But there are many many more.

By correctly naming the events you could also drop showing the event type, that are also not self explanatory. It might confuse players but I think that’s less likely. I have seen just a few wonder about that column. Looking at it it is quite usefull to know once you know what it means. Especially the “AxisX” and “AxisY” …

Yeah, those are leftovers from before Early access. Unfortunately it was part of the events unification improvements, but we lacked time for the launch so I simply translated 1-to-1 the old profile editor window.

Ok. So I just remembered the second problem.
The suggestion I mad in my first post can help with confusion coming from things the players tries to do.

Yet … there’s this whole other dimension of the player not knowing how to use tools or what tools are at his disposal. Mostly I have seen players not really caring that much until they see some other player use it, at which point they also want to do it…

Of course. Tutorials are the classic way to do it. Another way would be to extend the “Warning/Info” method in the training mode. Have like 20 Info messages pop up periodically with info how to use things. Which would be kind of a soft tutorial. We already have part of that in the warp info and some other two or three such things that show up periodically.

Another classic way is to display these info lines during the loading screen. Initial Loading takes quite some time for I:B.

One more idea is to integrate it into the mission system. The only thing the player needs to know then is how to accept a mission. Then there could be some basic small mission that are really rudimentary. These rudimentary missions could have little instructions attached to them that do break immersion but act as a fluid tutorial while in the big battle:

I just started the game after some months of absence, so basically i’m a newbie, and i couldn`t join the game.
I should choose a fraction, which i did (kept the default, i think it was red).
Then i should choose a spawn point, and there the confusion starts:
On the left side of the screen i see ~50 different things i can select, and none of them let me actually spawn. I don’t know if this list contains ships, planets, or players, but either way: I select an entry, and then either the “Spawn” button on the screens bottom is greyed out, not there at all, or it just says “Spectate”.

Also i sould select the “closest Spawn”. Closest to what exactly?

edit:
So, after writing this, i can select bases and click on Spawn. So i guess, a new match has started or sth., or i just missed these entries before…

It was probably the ending of a match and you joined the losing team. At that point, very few bases would be able to spawn so the confusion is waranted. The buttons “next” and “previous” at the bottom would be used to cycle through available spawns though.

You know that sound and error message that appears when trying to warp but not fullfilling the requirements. Yes? “Duh, Duh, You need to go at least 240m/s!”

Put that on everything. Everything!

I agree that there is a need for more helpful alerts in the game, but I think that can only be part of the solution to the unintuitiveness problem.

I think the first thing that needs to happen is the decluttering of the HUD (which was thankfully already announced).
Take the weapons info for example: 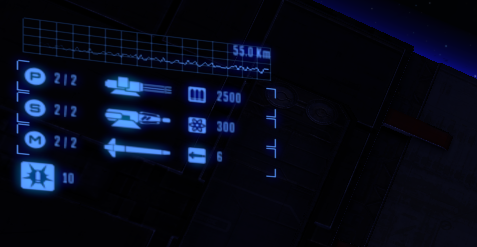 It certainly looks cool, but it features so much information that is nice to have but not really needed most of the time.
In my opinion one Icon for every weapon would suffice If I’m not missing something.
I would take the ammunition icon (during combat I only care what the weapon fires, not how it looks like), color it green when it is ready to fire, color it grey and rotate it when it is reloading, color it yellow when it is out of ammo, and color it red when it is overheated.
Each weapon state is accompanied by a text alert next to it to make it even more obvious.

The only number that really has to be display is the missile count. The count could be displayed before the ammo icon.
So in this case:

The help alert text could be faded out after some time. I would display them when the weapon state changes and then hide them after ~8 seconds. After a while you know what every color means.

“hey im a newbie in an interceptor, lets look for people to shoot!” 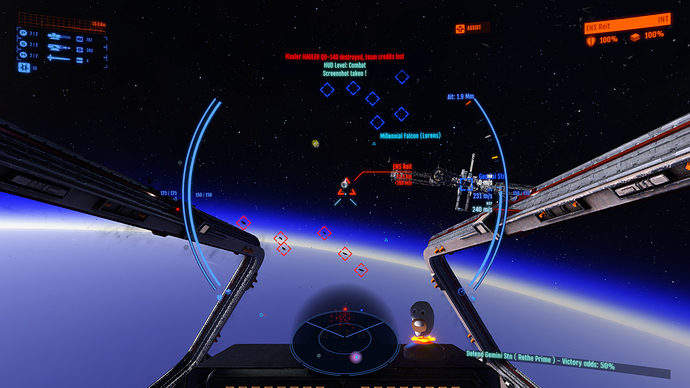 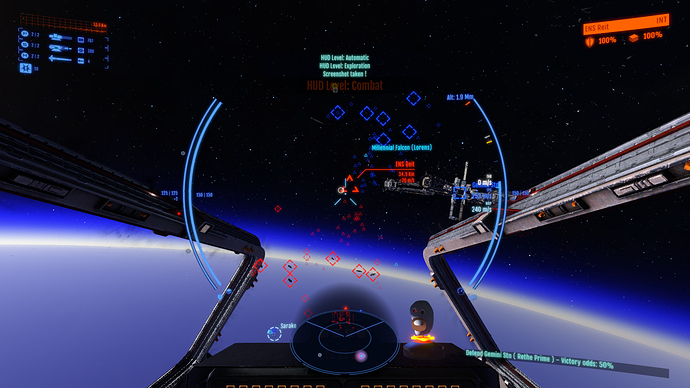 screenshot28.jpg1920×1080 561 KB
“oh look at all the targets for me to fight”
Just make exploration mode default ASAP, its really way better until a different solution is found. it does also impress people with the massive scale of the battles

Random quality of life improvement suggestion: “flight assist defaults on” toggle. a lot of people fly FA-off and forgetting to turn it off can be fatal.

needing to switch to direct mode for joysticks seems super unintuitive for most… maybe there should be automatic detection for that.

edit: server numbers should list player count rather than percentages. 10% looks really bad even though it’s 30 people, the size of most game’s normal server population.

Great changes on the lasted two patches! The missile “no target locked” and “out of ammo” are great and not annoying at all.

Descending deep into the atmosphere of a Moon/Planet should bring up a warning, kind of like the micro-metorite warning, for ships that are affected by the “reduced efficiency depended on atmospheric pressure” effect.

removing the numbers from the side bars makes things a lot more unintuitive without much of a benefit in "declutter’.

If the priority is helping new players then UI changes that remove information should be avoided when possible. The confusion and gameplay negatives arent worth the ‘declutter’

the +'s are basically mandatory for intuitively showing new players what the overcharges do without having to look up a guide. They can just see it directly with those there.