Given that it takes a little while for the attackers to re-join battles after being destroyed, I think it would be beneficial to lower the amount of time spent traveling, in order to keep the flow of battle moving.

I have a two suggestions to make this possible, split into strike craft (corvette and below) and capital ships.

Quick deploy for strike craft revolves around developing the carrier. I think the carrier should be given two abilities:

The only “downside” to this is that carriers are delegated to mostly a passive role, and any players that pilot them would be bored very quickly. I would greatly recommend creating a system that would allow players to be able to ‘park’ their carriers and fly a different ship, or allow for some sort of RTS style AI commander role to go along side these ideas.

Quick deploy for capital ships revolves around the creation of a new station asset: Capital Ship Launcher (CSL) (you know you want this).

I imagine the launcher to look something like Babylon 5’s warp gates: 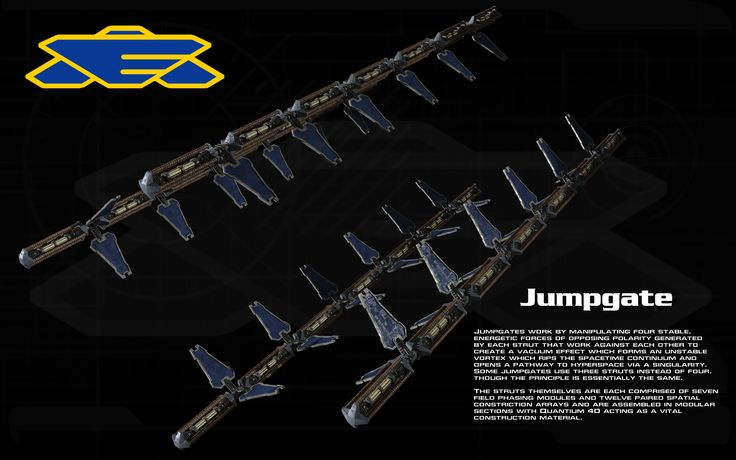 The CSL is a separate station object that resides only a few kms from the capital ship spawn. The gate can only launch capital ships. Carriers should be able to load up on strike craft prior to jumping.

To activate, a capital ship enters into the gate. A pop-up key prompt or something in the star map indicates the orientation of the gate. The gate can be re-orientated once every certain amount of time. The gate can be aimed at any friendly stationary carrier or friendly/enemy station that is within line of sight. Once the destination is confirmed, the capital ship is launched in a similar fashion to the deep strike ability. The cap ship is stopped within a certain distance from the target, say 5 km from the carrier and 20 km from a station.

Another great benefit of CSL is that it naturally allows for a more ‘lattice’ style battle flow. Once created, I would very quickly break up the current battlescape planet/moon orientation into two separate systems. Have pairs of ‘special’ CSL’s, one at the first system and the other at the second system that allows for deployment between them.

Also hurling yourself at the enemy with a giant catapult is always fun:

They could very quickly become a focal point for battle and control.

The protection of the CSL could in my mind be done by the station overhaul idea that I’ll post on sometime soon, mostly involving ~seige shields~. Otherwise, more station defense platforms of greater defensive power would do the trick nicely. I wouldn’t want these things to go down quickly, so maybe also give the CSL a very healthy shield pool.

With these two systems in place, it would facilitate a more dynamic battle flow, allowing for quick reinforcements, and faster attacks, as well as increasing the reliance on team-based play.

Honestly? I feel like the devs should be looking for ways of putting carriers close to a battle and making them survivable, rather than hiding them away in shame somewhere else.

I like the suggestion of giving carrier pilots some sort of control over a percentage of the local NPC forces, maybe even a few escort destroyers and corvettes, but there’s a lot more that could be done with them to make them viable. Will get back to you once I’ve thought through some ideas.

I think there’s more than enough room for both styles of carriers, courtesy of the future ship loadouts. My carrier is less focused on the combat aspect and more on providing an easy spawn point.

There is a trade-off between time-to-action and value-of-life when adjusting respawn time. The further you reduce time-to-action the further you diminish the value-of-life, while having too long time-to-action followed by a short combat is also not good. If life is worth nothing, players are going to behave accordingly, doing things like suicide runs. On the opposite if you are spending more time travelling to a combat situation than being in combat, you are not being entertained as much as you should be during that time.

too long time-to-action followed by a short combat is also not good.

Mordhau suffers from this. You always spawn quite a long way from the action and can die very quickly. It can lead to a lot of anger and also turn the fanbase quite toxic.

Solutions? Less travel time (yes this does reduce the value of life but also reduces frustration) or improved combat options with good balancing. Or both.

Having to balance value of ships with how much time a player has to do a repetitive task seems really bad to me.
At least in an FPS stuff can usually happen on your way back or spawns are random so the action moves arround the map.
But here the player can replay the warp minigame over and over. It’s a quite alright minigame, but I feel that mechanic should be reserved for interception and exploration and maybe some tactical shenanigans. Not to ‘get back to the battle everyone is at’.

The ships need to be valuable anyway, so that a suicide matters no matter what.
It is a problem that the bomber is so cheap in general for instance. Why should the defender be able to spam infinite torpedoes yet the attackers are punished by travel time.
It sounds more like someone should run out of money quickly doing such a tactic.
The ship could be expensive but the loadout relatively cheap.
Even interceptors should be expensive. Only exception is the free one you get when you don’t have any money anymore.

Making income more dependent on winning the game will also help (passive income). So someone might be able to afford a bomber if they play ok every 5 minutes.
But playing really well won’t allow them to spawn one every minute but maybe every 4 minutes. Increasing the value of ships and decreasing the viability of sucide runs.

It is a problem that the bomber is so cheap in general for instance.

I agree in principle about the costing of ships. Hopefully it’s all lower for early access testing anyway.

I would propose that a bomber actually be closer in cost to a corvette. They both have specialised roles of different sorts, and it would encourage players to be more careful with them.

It is a problem that the bomber is so cheap in general for instance. Why should the defender be able to spam infinite torpedoes yet the attackers are punished by travel time.
It sounds more like someone should run out of money quickly doing such a tactic.
The ship could be expensive but the loadout relatively cheap.
Even interceptors should be expensive. Only exception is the free one you get when you don’t have any money anymore.

I want to quickly comment on that because it’s quite important. The main idea we are going is: the basic loadout is cheap ( current prices ) but not too effective (ex.: on int: gimbal weapons). The custom loadouts however will have more significant costs. A full loadout for an int could consume 100+ credits for example while the base ship is 25. The prices will be rebalanced around that idea once ship upgrades / loadouts are in. It’s also why making credits atm is relatively easy, as the money sinks aren’t too bad.

So for the bomber, once we have loadouts, it’s very possible that the “basic” bomber will not have any torpedoes, but just missiles. For an int, the gimbal weapon will have a lower DPS once we introduce back the fixed guns.

The custom loadouts however will have more significant costs. A full loadout for an int could consume 100+ credits for example while the base ship is 25.

Curious, how will you balance the new player experience if they can’t earn credits as quickly as vets? Are the custom loadouts just going to be expensive side-grades to the stock?

The way you worded it almost makes it seem like vet players that can accumulate credits faster will be able to get much better ships and components than stock, although I’m positive that isn’t the case.

Curious, how will you balance the new player experience if they can’t earn credits as quickly as vets?

Who says they can’t earn as quickly? All they need to do is get out, start completing objectives/killing and buy their first items to specialise or make their life easier (e.g. different gun type/expanded missile rack etc). Potentially, things will actually slow down once your grinding to the next ship class.

Ugh, this isn’t a very clear post… I’ll try to rephrase it.

You start by jumping in a basic interceptor at 25 credits. Before long, you’ve killed a few baddies and picked a couple of quality-of-life upgrades that make your life easier.

However, your interceptor now costs 100cr each time you launch.

Quickly, you discover a balancing point with your equipment where you’re consistently making a profit with each run. You adjusted your setup to cost 80cr and are earning about 150cr per life.

Soon, you can afford the bomber… BUT… It doesn’t have any torpedoes.

So you carry on flying your interceptor until you can afford the upgrades to the bomber. Now the bomber costs 250cr to launch instead of the standard 120cr, but you can cause MUCH DAMAGE. Whoop!

Oh dear… Those interceptors seem to be getting closer…

(All credits are illustrative examples)

Curious, how will you balance the new player experience if they can’t earn credits as quickly as vets? Are the custom loadouts just going to be expensive side-grades to the stock?

The way you worded it almost makes it seem like vet players that can accumulate credits faster will be able to get much better ships and components than stock, although I’m positive that isn’t the case.

Well, for once it has to be coupled with the rebalance of the credits rewards, which currently give too much for active kills / bounties, versus the passive ( team-based ) income. It’s possible we’ll simply get ride of the credits rewards and use another system ( skill points or something ) instead - which then get into account when it’s time for the AI commander to redistribute credits. That way, the rewards are still there, but vets are less advantaged compared to new players.

In terms of upgrades and loadouts, some upgrades should definitely be better but have drawbacks ( in addition to their credits costs ). The int’s gimbal gun vs fixed gun is a good example. Gumbal guns are cheap and easy to use, but do less damage ( good for beginners to do guaranteed damage ). The fixed gun will have a higher DPS and cost more, but require more skills to use due to manual aiming.

Some upgrades are simply going to provide new systems or features to the ship. For a start, all the current systems are going to become parts of the upgrade system ( ex.: int’s scanner, dest’s proximity mines, bomb’s torp launchers, etc… ). It’s possible even the targetting system will be upgradable, the detection system/range, etc…

There will also probably be some “power” upgrades, like: faster shield regen, higher heat capacity, more armor plating, longer boosting etc… some of these could affect the weight of the ship, reducing its maneuverability compared to a basic ship. In any case, we haven’t figured out the full list of upgrades and how they’ll work, those are just ideas we are currently playing with.