In the alpha version, the space was as clean as it should be. In the new patch, lines and particles were added to sense the direction of speed. I want an realistic space again. Please мake it possible to disable for those who do not like this effect.

This was something I found visually interesting, but really distracting really quickly.

We’ll be addressing this visual effect in future updates. Flavien mentioned that he wanted a strong effect, but I’m really thinking something more subtle would be better.

Having a toggle, or slider for the effect was mentioned, so we’ll see what get’s implemented in the next patch.

Thank you for the feedback!

Yes, it would be great! If everyone could customize this effect as he likes or completely disable. I will hope for it.

Kind of like one of my older previous suggestions about bases and space stations having some outside random maintenance workmen (welding etc), vehicles, and on space stations outside elevators in action. Based upon ones distance to the base/station and again using do-da magic math boy stuff to make it economical in 3D. So they come alive. If there’s time and room in the budget near launch, post launch big patch.

The effect disappears in atmospheres. The effect is affected by the ambient lighting conditions ( it’ll redden at sunset for example ). It’ll get dark in the shadow of a planet.

The effect changes color based on speed too. At higher speeds ( closer to light speed ) it gets greener, then bluer.

We can easily add a setting to disable it or a slider to control its strength.

In Warp, it is just WAY too much. 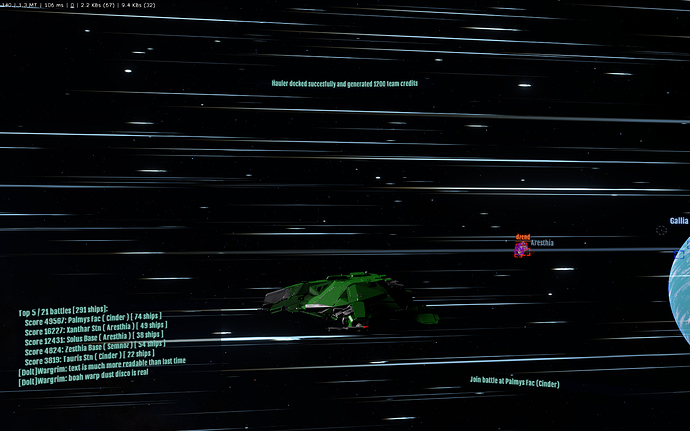 sometimes I feel like people bitch just to bitch

sometimes I feel like people bitch just to bitch

Hey, don’t assume to suggest to tell me what I’m supposed to be by knocking what I be…

Any chance of it being made part of the ship’s UI like before in most situations? (Perhaps with the effect as it is now for rings.) It was a neat idea.