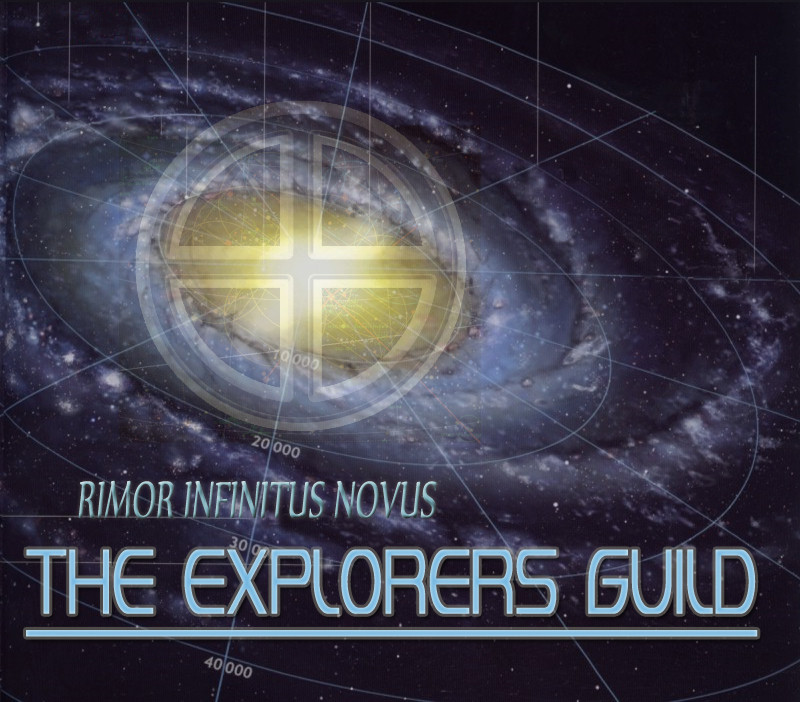 Hello! We are a guild for and by explorers. We remain largely unaffiliated with any and all organizations – that means we are completely neutral, until someone attacks us, in which case we’ll defend ourselves. Our neutrality extends towards all parties, including pirates and mercenary bands.

There are two tiers for members. Please note that the exact differences are due to change as time passes.

To apply simply post in this thread, for now recruiting is fully open!

Mainly we form a group that creates and distributes (as in: sells) maps of the universe. For the most part, we independently just map what we come across. However, we also offer to map something for someone, as long as our neutrality is not endangered by the mission. We’ll sell resource locations to miners, locations of uninhabited planets to people seeking to colonize, destinations for lucrative trade runs, etc.

However, for the most part we are free individuals – if a member doesn’t want to partake in a mission, she / he is free to ignore it and continue on their trek.

I would LOVE this. I wonder if active mapping is planned for the game. I want to be able to use my recon/exploration/mining/prospecting/scanning skills to detect any valuables and sell their location - i guess adding them to my map and simply copying my map info into an item that can be sold to others.

Or perhaps spend some time scanning asteroids and some of them having very precious metals/volatiles that i can sell as explained above. Or even scouting/espionage/cargoscanning by contract/mercenary.

So, you want to join? It’s kinda unofficial until Kodiakus says you’re in, but he comes by irregularly and seems okay with us handling that.

@Anyone else that was / still wants to be a member: come say hi, post you membership status, and I’ll start a member list in the first post so that this thread doesn’t seem so empty.

[quote=“xamino, post:3, topic:51”]So, you want to join? It’s kinda unofficial until Kodiakus says you’re in, but he comes by irregularly and seems okay with us handling that.[/quote]I’ll wait until at least Kickstarter and see what are their plans on Alpha/Beta access and schedule. I gather there’s no point in throwing the food in front of a standing horse (i just invented that, yay me).

Okay, we’ll still be here when the time comes.

I’m back, baby!
Good initiative on creating the topic xamino, I was just thinking of doing it myself.

I’m still on for a full membership btw, I ain’t quitting yet.

Glad to see people still around, you’d think the whole “Hey the forums are up again” would be a front page thing, oh well I guess I didn’t miss it by much.

and I’m still here for a full membership

Since at this point it is still early to make decisions on a possible future yet to come, I remain an, sort of, independent explorer, willing to cooperate if possible.

Knowledge is power, guard it well.

Good to see the thread back up, official or otherwise.

Welcome back Runiat, good to see your still around stirring up trouble

Prophet (aka Joker in the void on old forums), can we assume you are interested in associate membership?

sunders in from some directions

Jeezh, this place is more difficult to get into than whatcha call that spot … fort knoxx …

Uh, yeah, you can assume that.

I remember signing up for the Explorer’s Guild as an associate member a few years back. God that was a long time ago. I’m still in!

Good to be back to Infinity. Let’s hope the game makes it off the ground so we can start doing all the exploring!

Welcome back! Has it really been that long? … I do think you’re right, the Guild has existed since 2010, IIRC.

This game… still exists? Once the time between updates started to be measured in years instead of months I’ll admit I migrated to the star citizen band wagon but I’m moderately surprised this place still seems to have some life left in it. well then, sign me back up for full membership. lets hope this game launches sometime in the next decade.

Well then, welcome back!

Sure it’s still alive, we’ve been here a long time. This community has an incredible attention span compared to other places on the internet!

Plus it is finally looking like some serious stuff is about to go down, so that helps, I guess.

Woo, been a while since I’ve bothered to log in and what do you know posts on the Explorer’s Guild Page!

I was in the EG, or at least, was on the member roster; my name was Legato, but I had trouble gaining access to my account again, so I made a new one

Rimor Infinitus Novus! (if that was the motto)

Welcome back! What rank were you? I’ll add you back if you so desire.