Several options have been discussed off and on over the past months in the community. Here’s a thread just for this topic.
I would like to hear what others think would be optimal and why they think it would work for them or in general.

I want to list all options I’ve heard up until now and my opinion to them as well as some ideas for other options @Playbenni and me discussed on Discord today.

First up the Idea I think might work and is based on @Playbenni’s Idea from today:

This idea looks similar to the “Virtual Navigation Cursor (Target)” mode. The ships rotation is controlled the same way as with it but the inputs are given differently.
Rotational Control
The white cursor is confined in the same circle as with “VNC (Target)”.
The white cursor can be moved around this circle without affecting the ship.
When a “Set” button is pressed the ship target rotational speed is set to the current position of the white cursor on the screen.
A second indicator is placed on the screen showing what the current set target rotational speed is.
The player can use the cursor to select targets (or fire weapons directly) inside that “confinement circle” without affecting the ship movement.
View Control
If the player tries to move the white cursor outside the “confinement circle” it will behave like an edge in an RTS game: The view is rotated proportional to the amount the mouse is moved while it sits on the edge of the “confinement circle”.
To rotate the view into the other direction the player first has to move the cursor across the “confinement circle”. Due to the small size compared to the whole screen this happens much faster though.
(Optional: Headlook could allow to rotate the camera even without touching the edge, but locking the white cursor)
Translational Controls and other Controls
The same as with smaller ships.

Pros:
Commands to the ship can be assigned instantly. No switching needed.
Stable view for Long range engagements.
Disconnect from ship control minimal as it only requires one click (no view change, no mode change).

P.S.: The “confinement circle” isn’t really necessary. If movement outside the circle is allowed and when the “Set” button is pressed outside the circle the target rotational speed could be set to the maximum with respective angle.
I feel like confining the cursor might help reduce the disconnect between flying and aiming and reducing the delay between performing these two actions, I’m not sure though.

Here others I heard/thought about.

These are used on smaller ships and work quite well for them. For capitals, not so much. “Target” mode works somewhat as it doesn’t require constant input to maintain a rotation. The downfall of both are in my opinion that they can’t be used while looking around at the same time.
There’s a “headlook” option in the game that allows one to switch between control and looking around. I have tried converting that “headlook” into a toggle so I could metaphorically “run to the helm” and change where the ship was heading and the go “take out the binoculars” again but this didn’t work at all. The delay between switching between the modes felt really bad and I was quickly overwhelmed.
The only way I see these two working as is is if all capital ship functions could be controlled with two hands and most devices don’t have enough buttons/axis easily accessible to do that.

Pretty much what EVE does.
There are commands that allow you to have your ship approach a target, orbit and other simmilar moneuvers.
You can also click one direction and the ship will rotate to point into that direction. To fly “manual” turns you would either have to use momentum to drift or click a lot while flying the curve.
Advanced Commands could be introduced to allow you to set to orbit, close, fly curves or other commands.

Pros:
No need for switch over. Focus on management and other ship systems. Movement of ship is easily dealt with.

Ships are controlled by giving them move orders to specific location/headings/rotation. Similar to heading control but more focused on map and tactical view game-play. I’ve seen some games where you can project a hologram of your ship to where you want it to be in 3rd Person without a map. Such stuff.

Currently the capital ship combat has none of those things. Personally I’m hoping the devs push for tactical, manoeuvre focused combat for the capital ships, (something where the be-all and end-all tactic isn’t just pointing your ship directly at the bad guy to minimise your cross-section while shooting and strafing at max range) but if they don’t, there’s not much need to bother with a ship control system that’s all that complex.

My feeling is that Battlescape should simulate direct control of capital ships with joystick or virtual joystick input. The nearest analogy of direct control of large, slow vessels is boats. Boats tend to use a joystick to control for near-dock manoeuvres, through their bow and stern thrusters. Direct control of large ships is a selling point of the game in my opinion. That doesn’t mean they couldn’t also have “set and leave” control as well, in the same way that boats have auto-helm systems.

If you want direct control, stick to interceptors, bombers, and corvettes.

It would be REAL COOL if there were active and passive methods of detection. Something more like submarine warfare.

I would like to see some method of queuing up orders with timers, or a flow chart. Plotting courses, ECM, tactical, etc. Think about this. For Helm, Tactical, and Engineering being able to queue orders and set priority of targets/repairs.

If I had my ULTIMATE…

An interface like Ender’s Game… The CO is in a command bubble with full 3D screens. All information would be displayed on the screens, or a HUD like function.

Edit: @Ripper’s post didn’t show up for me until after I’d posted this.

In my opinion EVE style controls (with increased fidelity) would be most appropriate for capital ships. The player is playing as the commander, not the helmsman.

Focus should be on tactical manoeuvring (as @Naiba said), target prioritisation and managing which weapons are used against which targets.
@Crayfish mentioned modern large ships but focused on near-dock manoeuvres. If we consider warships, they have a helmsman who performs manoeuvres as commanded by the commander. The commander doesn’t pilot the ship themselves which frees them to perform the many other tasks required of them such as target prioritisation, assessing how the battle is progressing and planning their tactics, coordinating with other players, etc.

The skill is deciding how to manoeuvre/how to position & orient the ship, not actually carrying out that manoeuvre.

As commander, you want to issue a manoeuvre command and then get back to target prioritisation etc. But as @Naiba said, the fidelity of control offered by the ‘manoeuvre command’ system is critical.

To keep things more “submarine” like, I would control weapons and active sensor capability of all interceptors, bombers, and corvettes. Something like having those functions disabled on the ship until they arrived at a waypoint that is set by the CO of the capital ship, then have those ship functions available to the pilots. This would allow the CO of the capital ship to maintain stealth, until certain conditions were met. Otherwise, some disgruntled pilot can spoil the stealth by giving away their position.

Then again, there would need to be a mechanism to regain control from a rogue CO. Maybe a vote of no confidence from the pilots.

I can see people wanting less focus on the ship control but I don’t think EVE or even RTS style control really has an advantage there compared to a streamlined “Rudder and Throttle” Set controll like I proposed. That is when it comes to controlling one ship.
Most (Sub)Marine games do have rudder and throttle controls and they have exactly that focus: Get into the right position, prioritise target, manage system, execute tactics.

When it comes to controlling one ship it’s important that the time it takes to make that command is as small as possible. I tried switch-over and that wasn’t fast enough. A click might be fast enough. Eve like has too much disconnect for me but would be fast enough. RTS would be slow again though, because in a 3D space it would take you relatively long to set your desired position compared to “flying into the direction and stopping at the right moment”. (Homeworld and others). It works with multiple ships but isn’t faster for a single one in my opinion.

That’s not actually a given. If there’s an advantage in the Battlescape universe of the captain having direct control, then he will have direct control. War is the ultimate competitive environment where small advantages win battles.

I imagine the helm of a cruiser in Battlescape looking somewhat like this: 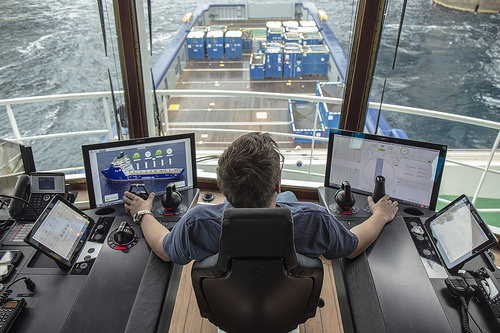 As commander, you want to issue a manoeuvre command and then get back to target prioritisation etc

Here’s a wacky concept just to throw into the mix: the capital ship is piloted by the AI! You could issue commands like “Follow that target” or “Orbit this target at current range” or "Run away!’ etc.
You can then have fun blasting stuff and controlling speed/energy while the ship flies itself. You’d have to keep an eye on it though, because maybe your AI helmsman lacks common sense…

It would need some sort of collision avoidance smartness though…

That is EVE controls. I’m assuming that’s what everyone means by EVE style controls.

In addition to those I’d propose:

In @Lomsor’s OP he described EVE controls as [click to go in a direction], and the other commands as “Advanced Commands could be introduced”. Maybe this is his bias having an effect

… I’m pretty sure no one would want a control mode where you have to keep clicking to fly a curved path! The reality is that Aproach, Orbit and Keep distance are part and parcel of EVE style controls.
@Lomsor can I ask you update the OP to reflect that?

The reality is that Aproach, Orbit and Keep distance are part and parcel of EVE style controls.

I edited my OP. But I think they would play a much smaller role in I:B due to how the combat works (may possibly work).

I played a few hundred hours of EVE Online. Just for the record.

One option I forgot to detail is:

Fractured Space does this. But default rotational controll is on WASD instead of translational like in I:B. Translational is on JKLI.
This works. But the ships are quite nimble. I think this would limit the devs in how hulking and slow the devs could make the ships if they wanted too.
I also think it has a “Allign with Cursor” button.

So far, I’ve been EXTREMELY impressed with Flavien. I honestly couldn’t be happier with the way the game has come along. My hope (and confidence) is that they will put the same level of detail into capital ships as they have with everything else.

That is EVE controls.

Thanks for the information! I wouldn’t know, having never played the damn thing.

Now that “CapshipAutoTurn” control has been implemented, can we get two course indicators like in Starshatter:

Though I am not sure what their control points should be, either the closest moon or planet, or the star.