Continuing the discussion from Patch and Updates Notes:

This patch is mostly a performance / experimental patch with a few asset improvements.

Those optimizations fall in 3 categories:

Hiccups / having a more stable framerate: the game should now behave better for some players who experienced these strange issues. We’ve still indentified one additional source of major hiccups related to Windows’s message queue. This cannot be fixed in the current version, but we’ll come back on it later on.
Adding local multi-threading to some parts of the engine: those can easily double or triple performance, but only at a local ( sub-algorithmic ) level that was relatively fast to start with. Therefore those changes will mostly go unnoticable to most players.
Algorithmic improvements like culling / octree updates: those can bring massive speedups, but only in the heaviest scenarios, involving complex scenes.

Definitely good to see performance updates! I will be testing tomorrow

Algorithmic improvements like culling / octree updates: those can bring massive speedups, but only in the heaviest scenarios, involving complex scenes.

Don’t undersell this @INovaeFlavien ! It sounds like it’ll be important if more decoration will be added to planet surfaces!

The performance gains are insane!
I now have a constant 60 fps everywhere, even in asteroid fields at stations etc… I play on a 1080, the game is butterysmooth on extreme, before that I only got 40-55 fps on medium/low in most locations.
The corvette looks even better now, cannot wait to have everything textured and gameplay.

Wish I could use the previous version to take some benchmarks before upgrading.

There is definitely some improvement, was getting ~65fps max at some locations, now it goes up to 85fps. However the frame-rate has a huge variance, it goes from 85fps down to 25fps in some situations in space. One of the things I noticed is that while in the hangar the fps is around 35 while just outside it, it can go back up to 60. 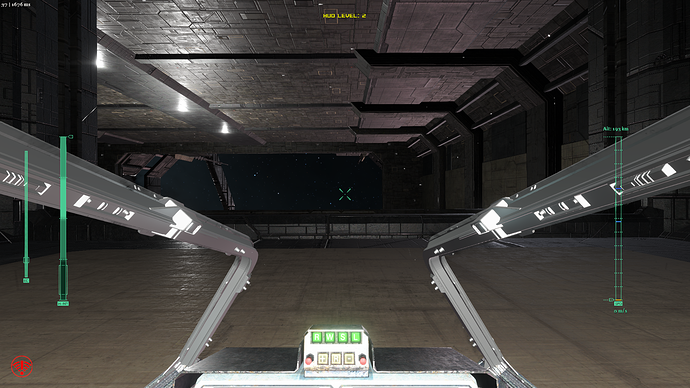 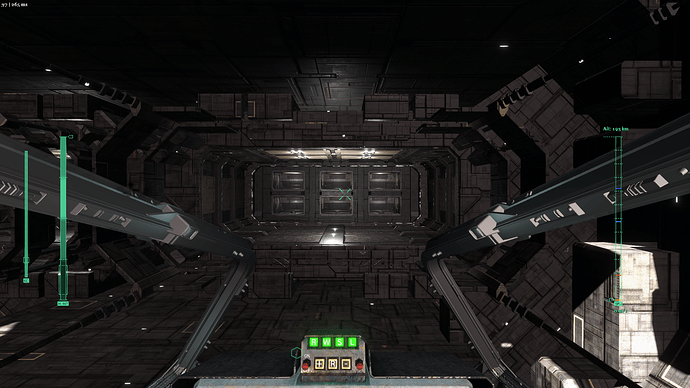 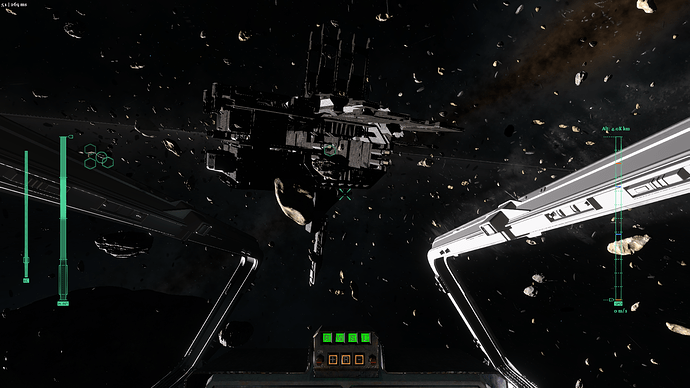 One would think that the last scene is more demanding than the other two, however first two are ~35fps while the last is ~50fps, it might be a light issue.

Yeah critic, the hangars are some of the heaviest scenes in the game so far ( along with planet surfaces ). Due to the light sources, many of which have shadows ( which you can hardly notice ). There’s like 20-25 lights per hangar, maybe half with shadows that need to be updated.

Optimizing shadow updates is planned but not soon, however once optimized it should have another nice performance boost.

Great stuff. Noticeably smoother than it was before.

it doesn’t seem anything’s changed installer wise since the last update but i might as well post how it works in this patch on windows 7.

Currently updates don’t work on w7 because it cant uninstall the old version, error is still always an inability to fully delete a file ex: “Error: Attempted to delete file ‘C:\Games\I-Novae Studios\Battlescape\Dev\Structures\SFC-Stations\82452047.insm’ but it still exists.”.

For now anyone who has the installer and launcher working on w7, your workaround is to find your inovae game install directory, delete ONLY your “Battlescape” folder, then go to your windows programs and features list, find I-Novae: Battlescape, and uninstall using the official method which should complete properly. Then the launcher will let you install the new version of the game properly.

Well I’ve had 3 BSODs with this new version

Didn’t get this with the previous build. I have had it occasionally in Watch Dogs 2, but not in any of the other games I play.

I don’t think there’s anything I can do to diagnose this really is there?

BSOD usually results in a minidump. If you happen to have them could you possibly upload them somewhere for us?

Where is minidump file?

it doesn’t seem anything’s changed installer wise since the last update but i might as well post how it works in this patch on windows 7.

Currently updates don’t work on w7 because it cant uninstall the old version, error is still always an inability to fully delete a file ex: “Error: Attempted to delete file ‘C:\Games\I-Novae Studios\Battlescape\Dev\Structures\SFC-Stations\82452047.insm’ but it still exists.”.

This was an update to the game, not to the installer - those are separate -. I believe Keith fixed this issue with deleting files on W7 but hasn’t published an update yet.

@hrobertson Do you have the latest drivers ?

awesome, for now at least my post has the workaround for anyone who needs it

I didn’t. Pretty recent but not the latest. I’ve now installed the latest and have been in-game for a while with no crash, however there are no other players online.

Need someone to join so I can try to replicate the BSOD.

So I’m starting to think that the stutter issues are network related, at ~270ms I’m getting small stutters, even when the game is running at over 50fps, at 1000ms, it’s blatantly easy to make the game stutter.

Where abouts are INS servers located? so I can find out the latency for my location.

Does the game show your ping somewhere?

Press [F3] once you power up your ship, it will show you the fps and latency in the top left corner.

Today I’m going to see what fps I get in a variety of different locations, running on this system (can’t be bothered to type it 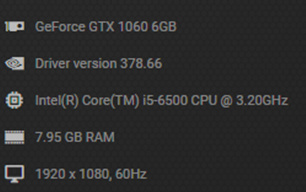 Skip to the end for a brief analysis, but why would you not want to look at the pretty pictures? 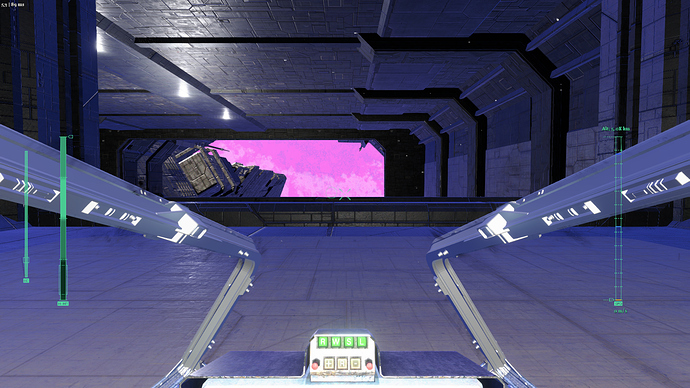 First loaded up, fps hovering at around 53. Very little change with power on/off or movement! Same in hangars located in the planetary ring. 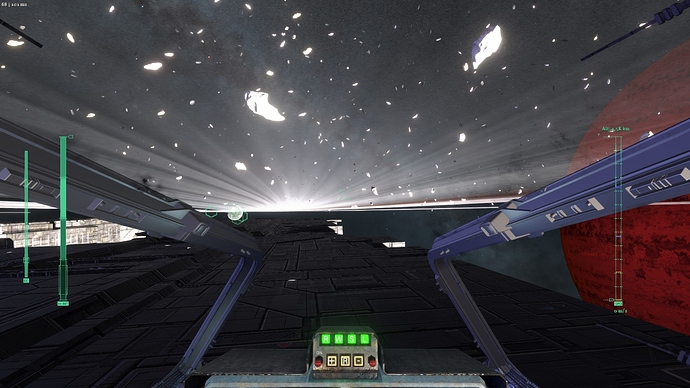 Jumped up about 10fps once outside the hangar. Presumably that’s the lighting. Looking around, it never dropped below about 47fps (when looking at Sarake) and rose to ~90fps when looking away.

A pretty smooth descent to Sarake with the framerate between the 60-70fps marks. Dropped slightly when I hit atmosphere, then went back to about 50fps when near the surface. However, there was no stuttering or anything! 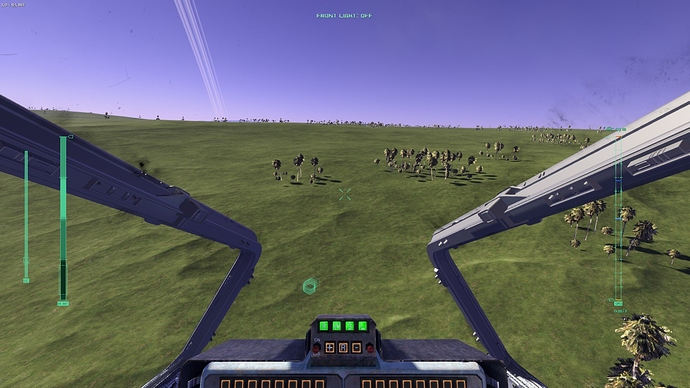 Heading back into space jumped the fps quickly back in the 100s! 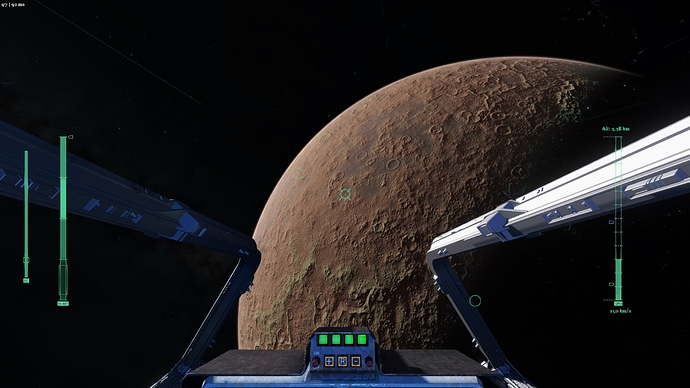 Warping to Aresthia had high fps, but on approach to the planet (first picture) there were some micro-stutters. Not sure what was causing it. They weren’t big or bad enough to be a problem - they were barely noticeable - but it happened. Could it be to do with approaching the planet at speed? 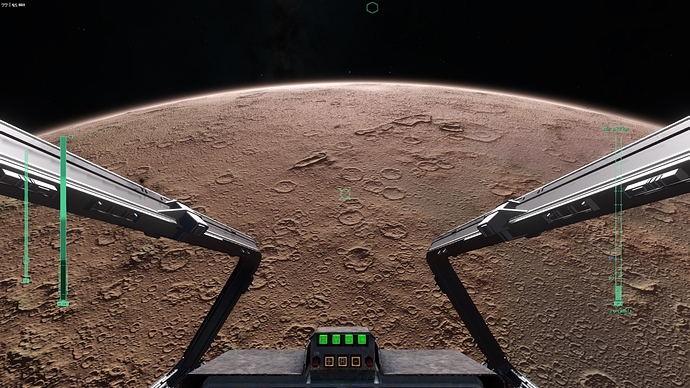 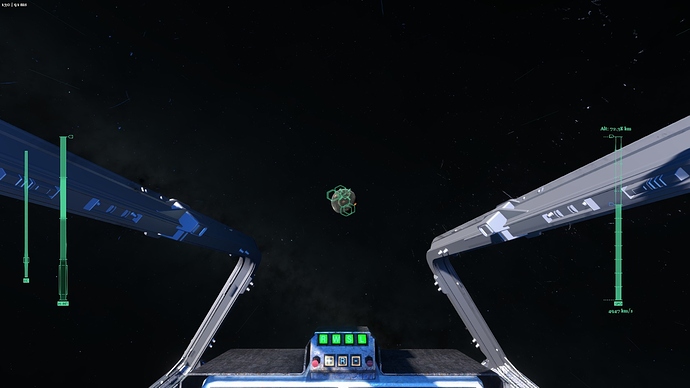 In deep space travelling to Cinder, framerate maxed out at 132fps! Note that was with the distant planet in the view. (See previous pictures). 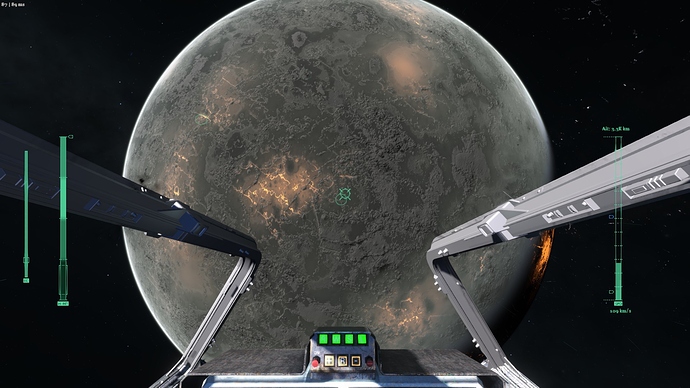 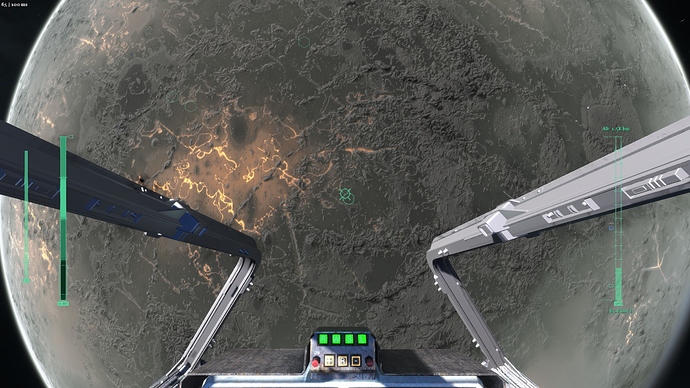 There was nothing unusual about the way the fps decreased on approach, it still ran extremely smoothly. Interestingly, there was no hint of the micro-stuttering I encountered on approach to Aresthia. 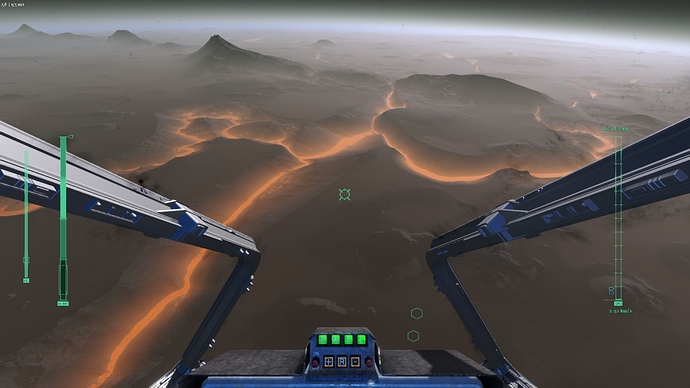 Dropped back to mid-50s once in atmosphere, but again, everything still felt smooth. Near the surface was ~50fps, same as Sarake. 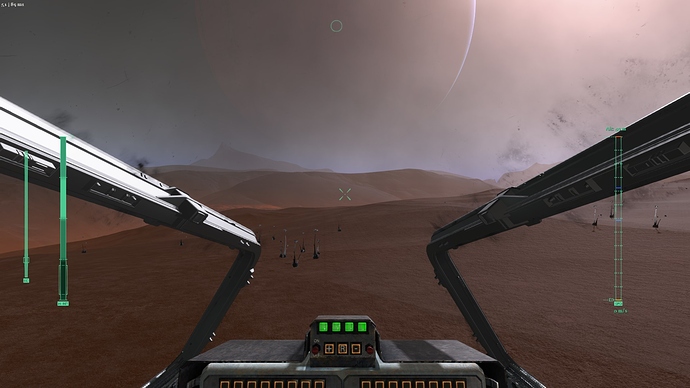 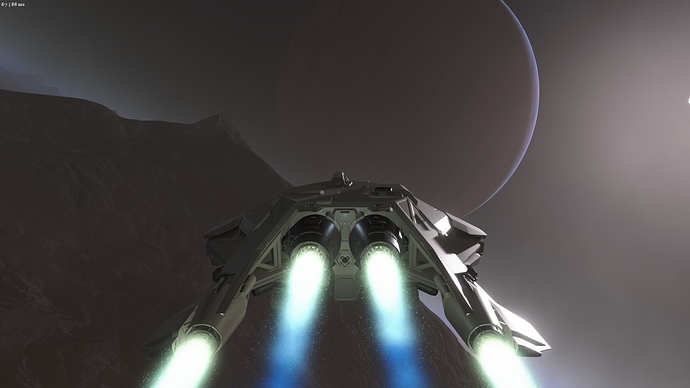 This was nothing to do with the testing, I just liked the mountain! I claim it in the name of Sable! 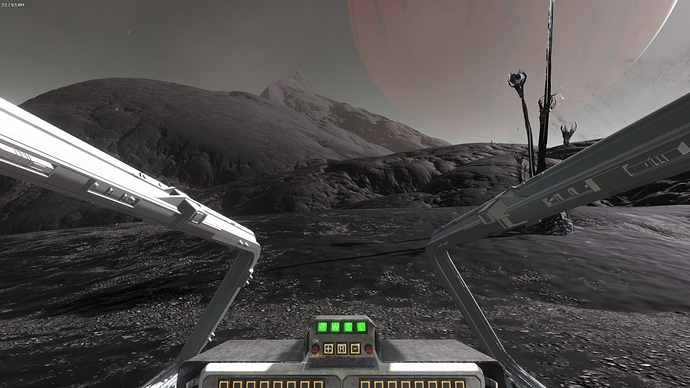 As I landed on my new mountain, I discovered that this dropped my fps to the lowest it had been, low 30s (never below about 32fps though). Lifting a few metres up from the surface immediately raised the fps again.

Verdict: smooth as silk (mostly)! Great job with the improvements!

Framerate behaved in a way I would expect. Looking at planets was more costly in pure numbers than looking into space, but the whole experience was very smooth. Even when surrounded by loads of asteroids, or flying around the stations, there were no hitches at all.
As stated above, the only major drop was caused by landing on Cinder. Now, I can’t (yet) confirm whether that’s the same on all the planets but I will get onto it soon!

Overall, I was very impressed by the performance and definitely noticed an improvement (though I have no hard data to back it up). Thank you!