Wowowow…the mouse lag is completely gone for me \o/ No discernable dips in framerate even with rapid mouse movement.

40-50fps on extreme settings with around 280ms latency.

As promised, this is a follow-up to my previous testing. I landed on Sarake and the framerate plummeted to 25fps! External view dropped it even further to 17fps! 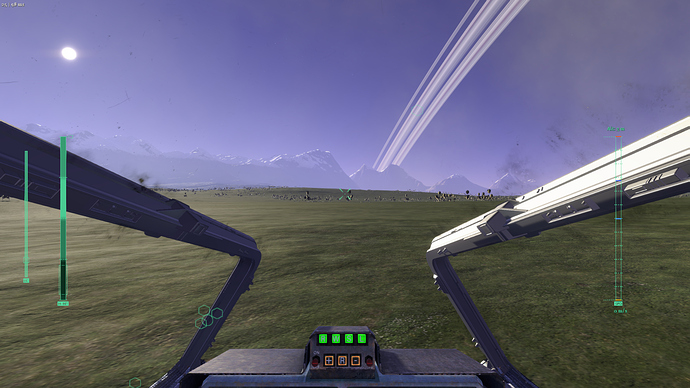 After doing some vertical bobbing up and down, it seems to slow down under 50m altitude (getting worse as you get lower). Framerate evens out above 50m (roughly).

Oddly, it was 19fps when hovering 10m above the ground - lower than when landed.

Edit: the loss of fps does not occur on Aresthia. It drops to low 40s for me when landed, but that’s it. So could it be linked to the temporary vegetation? Or is there something about the surface on Sarake/Cinder that is different and causes fps to slow down? @INovaeFlavien

Edit 2: I LOVE THE CORVETTE’S NEW WEAPON EFFECTS! Looking forward to when we properly get to work on weapons!

I noticed the corvette experiences heavy turbulence much quicker than the other ships on Sarake/Cinder. Is that normal? or a known issue? Above a few hundred m/s and the ship rattles like crazy.

It is a much bigger ship and has much more attack surface for the atmosphere.

Right, so no low altitude bullseyeing womp rats then

Well it does hover in the air much in the same way that bricks don’t, so it’s to be expected! (Points for identifying the reference)

I really like how the corvette moves at the minute - ot feels heavy.

One suggestion I would like to make for the larger ships is that you have less of the camera rotation wobble (or a faster vibration with lower range of movement) and more amplification of the lateral heavy lurching motions like you would experience on a plane in high turbulence. That would further enhance the sense of inertia in such a large ship.

To clarify: I mean effects on the pilot camera, not the ship motion. The flight motion is perfect as it is now.

All the camera shake is a bit extreme right now. Especially with how it keeps wobbling around for a while after you hit something or stop your ship.

Personally I’d like to see the camera shake have an a-periodic randomization while in atmosphere. Then, it would be more like hitting patches of dense air. The current constancy and magnitude of it is very jarring to my eyes. Also, if VR does eventually become a thing, I think the current shake would detract greatly from it.

Would be nice to see the exterior view mostly stable, have a lot of the shake just be the cockpit moving around as the ‘pilot’ is shaken about while their head/eyes stay level while fixed on what’s going on outside. Have the exterior view only start to wobble when things get extreme, or the moment of an impact. Humans are pretty good at that sort of thing.

The camera shake might be a bit over the top but far worse is the almost complete inability to control the ship at the point the shaking kicks in!

I love the Corvette. It’s a bit like trying to steer a bike with a flat front tyre and an Elephant sitting on the handlebars!

A rough example here. Watch the pilot steering as he does his final approach to the runway (around 3:00). The heavier the ship, the more work is required to halt its momentum.

True, it will be slower to accelerate. But in my case I was referring to the fact that steering becomes a suggestion at higher speeds. And not much higher either. Using the mouse wheel to accelerate you can have acceptable steering and then a couple of mouse-wheel rolls later and you can’t really steer at all. The control surfaces feel like they are doing nothing. Roll the wheel back one or two steps and control returns.

I guess I could understand that we aren’t flying aircraft and perhaps the thrusters on the ship can easily overpower the control surfaces but it certainly feels odd.

That might be where the point of difference is when I fly the corvette. I have never used mouse wheel to accelerate. Only WASD. As you say it is likely the case that the main engines are more powerful than the maneuvering thrusters so the steering would essentially be “drowned out” when at full throttle. Hence why I pointed out the rapid movements in that video. In the corvette I am usually making multiple hard swings with the mouse to correct the swaying motion.

I have a video of my recent playthrough I’ll upload.

That’s a weird effect that is also noticable in when in “warp” space. The whole flight system will change so I didn’t really report it.

It seems if you push the ship to the upmost speed limit it looses virtually all maneuvrebility. I think we should look at this again later when the gameplay starts to emerge.

She’s (the corvette) just right for me.

Finally got a video up after god knows how long. I’m new to the whole youtube thing

Sorry for the potato compression. My upload bandwidth only allows for pigeons and other small carrier birds.

This was the first playthrough after the update so I had forgotten about mouselook. The video starts with me gliding in from orbit at relatively high warp speed, hence the angle of attack in case I had to boost.

Sab1e,
When your frame rate dips what is your gpu usage in %? If it’s at 100% then its like most other flight sims and most likely working as intended. Night scenes in those Sims always seen to have the highest gpu draw in %, even if your gpu handles clouds well during the daytime.