It’s that special time of the week again, weekly update time! This last week has been a particularly busy one as we released a new patch, pre-Alpha 0.1.6.0, yesterday to our Developer Access+ backers! This patch contains a whole bunch of new content including the completed hauler, new cockpits, and the prototype geometry for land bases and factories. If you’re interested you can read the full patch notes on our forums. 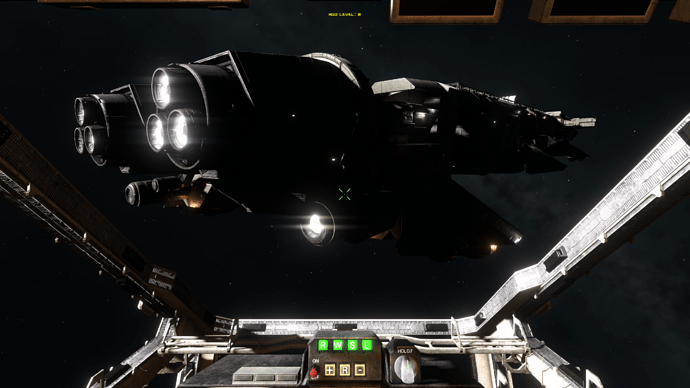 There’s a good chance this may be the only patch we release this month as we finish up the last pieces of low level infrastructure such as networking, the pledge upgrade system, and incremental patching. On the art side work will continue on finishing up the corvette cockpit and exterior hulls for the small ships. We’ve also started mocking up our UI which we hope to start integrating into the game in November. 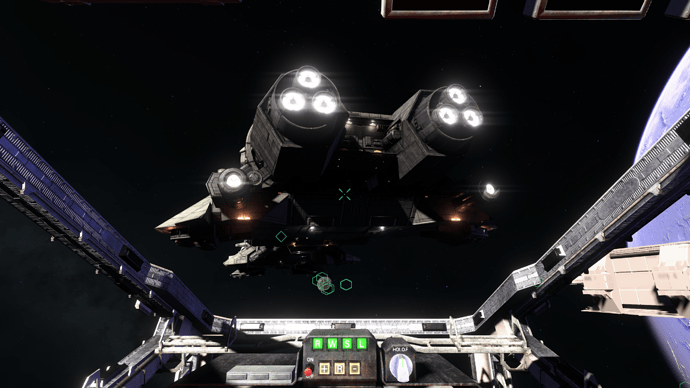 Looking further out into the future the first big-ticket new gameplay system will be weapons followed by the resource system. Our primary goal is to get all major gameplay systems mocked up as soon as possible so we can release the Alpha. Once that occurs a process of implementing lesser systems and continual refinement will take us to the Beta. After the Beta ships we’ll begin final polish and an optimization pass before going gold. We’re just taking it one day at a time while keeping an eye on the prize - shipping Infinity: Battlescape to all of you!

One last screen shot of the hauler because why not, it’s pirty

I really like the new cockpits. The textures are now a lot sharpers than before and the added lights really make it look even more interresting. The new bases are really well done also, right now its hard to comprehend the size but once you fly close to it you see that they are quite huge and complex. The best thing for me was entering the atmosphere of cinder and already beeing able to see the base from hundreds of kilometers away. One thing I personally didnt like is the added camera shake when firing the guns, on the one side that makes them feel really powerfull but its really nauseating when firing over prolonged time, I think it could be toned down a bit or reserved for weapons that fire really short bursts that have longer recharging time.

I guess the contrast (lots of black areas) makes more sense in HDR. Is this ment to/supports the new HDR thing?

Ohhh those textures always convey so much.
Pretty, really pretty

The improved cockpit shadows are really nice, so much better than before, but imo they could be even sharper (in extreme).

btw: Where did the rings go? Is anybody else missing them? (maybe my planet config is screwed, but I don’t remember disabling them)

To carry on what playbenni said; I hope the screen shaking can be made optional. I get motion-sick easily. I don’t want to barf on Huck!

I DIDN’T EVEN NOTICE! Shame.

Rings are disabled atm but I’ll enable them back in the next patch.

Thanks DEVs for the amazing work! Love the shots - texturing is spot on.

Yes we’re using HDR and the extreme contrast you see is because that’s how it is in space - something is either lit by an extremely bright star or completely not lit at all. In most images you see near earth it doesn’t look like that due to indirect illumination from Earth which is actually quite bright. On top of that we don’t calculate indirect light bounces from a ship onto itself (or much of anything else) so our images actually have a bit more contrast than what you would see in real life.

I do prefer it like that. My monitor is crap so i see mostly black with little detail but i also don’t like when devs artificially modify the lighting just so you could see things (the dreaded distance/ambient fog for example). Keep it up!

And now that HDR lighting is active, you guys need to tone down everything in your cockpit materials. Everything needs to be matte finish, probably black, and the control lighting needs to be muted (or tunable). Cockpits should have no structural members in the pilot’s field of view - a lesson learned 70 years ago.

An additional thought is that weapons with a muzzle blast should have a shade to ensure that the pilot isn’t unnecessarily blinded by his own weapons. If the technology of 360 degree HUDs permits it, the disk of the star should be blocked out.

Yes, now that you’ve put in HDR, I’m suggesting that you take steps to mitigate its impact on the pilot.

I don’t really understand what you are suggesting. Why does everything have to be matte black just because of accurate lighting simulation?
I think the style of the ships and interiors is supposed to look the way it does (star wars/alien trilogy tech inspired). If ‘realistic’ designs was the main goal you wouldn’t develop a traditional space scify game.

having HDR means the brightness of the screen will change depending on how many bright things are on screen, if you have reflective surfaces in the cockpit they will quite literally blind the pilot to anything darker. I don’t think its too bad now but it is a valid point.

The issue I’ve had in the current build is that space is too bright, not dark. Looking at the sun doesn’t seem to effect the HDR all that much and planets glow white until you get close. Only things that take up a large portion of the screen make a difference. Guess HDR cares less about intensity?

The sun is so bright it blows past the current range of precision we use for lighting calculations. We need to spend some more time on figuring out ways around that at some point in the future.

Pretty hard to keep the realism of brightness in space that won’t interfere with cockpit/control visibility but given this is set in the future they might have tinted windows. There is even a passenger jet that offers the ability for passengers to control the tint level in their window - maybe that is a solution?