Hey all time for another update. This week we finally moved past issues caused by an update from Microsoft to our dev tools that broke our build a few weeks ago and began final testing for our next patch. Unfortunately we found a couple of show stoppers in the deployment code which have now been fixed. Deployment, installation, and uninstallation using the new patching system are working well however we have a bit more testing left to do for upgrades before we’re ready to release the next patch.

A number of smaller issues within the game and engine code have also been fixed. On the art side work continues on finalizing geometry as well as textures and materials. This is going to take a while and the next couple of weeks are budgeted for completing the first 2 ships - the interceptor and the (NPC) hauler. These first ships will go a bit slower than the ships that come after because we’re currently experimenting with the look and feel as well as some new techniques that will be reused for the rest of our assets.

As we look toward the Alpha the art team needs to complete texturing for all of our small ships which include the interceptor, bomber, and corvette. In a couple of weeks they also need to begin the UI mockups for the HUD and in-game menu system as well as skinning the launcher. On the engineering side once we ship this next patch we’ll get back to the networking upgrades and the pledge upgrade system followed by incremental patching. Major gameplay iteration will likely resume sometime in August. 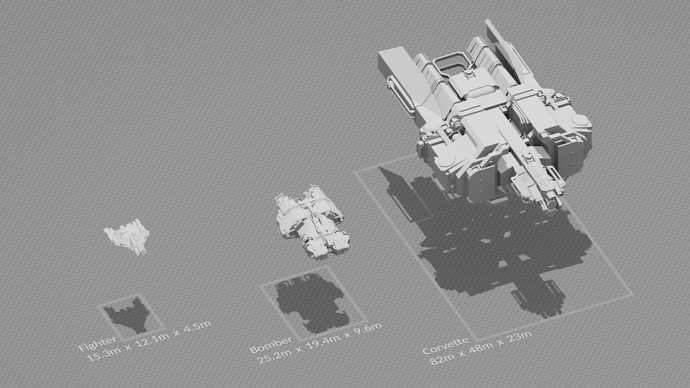 Disappointed the patch isn’t out but those ships are really starting to look amazing! Bomber also much better and love the consistency across the board. Nice work everyone.

Ships are looking great! I do think you need to get the patch out as soon as possible now after the delays. Unless it’s completely broken, let us test it and you can hotfix if needed. It’s been a very long time now since 1.4!

Yeah that’s basically the conclusion we’ve reached - it may not be pretty but at least you guys will have something to play with.

Looks like someone got their wish granted on the size comparison lol. Good thing to as I was wondering about sizes and dimensions. Also when this patch comes out do you guys mind if I make a Patch showcase video of it?

You named the interceptor ‘fighter’ again.

Great to see the sizes pinned down!

Really looking forward to shots of the various ships landed in a line for comparison purposes, preferably in strange places.

DarkZeak lol are you referring to me? because yes and thanks to the developers for that.

Naiba well one of the stretch goals is a fighter so if we reach it we will have both.

This is gonna be one of the best updates so far, well besides the first one where they gave some the game, I mainly mean like by all the new things in it.

Yes Plas, was talking about you

And as I stated, I’m glad they did that as well.

Yep. We’ll have the fighter and the other fighter that also gets called the interceptor now and then. That won’t get confusing at all for anyone.

(If it wasn’t for that stretch-goal, flip-flopping on the name wouldn’t matter.)

I vote for PewPew Canoe!

I absolutely LOVE the scale in this game.

You guys are developing this game exactly how I would want you to. Just keep doing what you’re doing.

Yeah, exactly. If they focus on making their base pre-alpha build system and engine structure clean and extensible rather than trying to rush anything out, that the rest will come more efficiently. I’m sure the reasons for the patch taking longer than anticipated are related to those core ideas.

You are correct, it’s a long-term move laying the foundation for the future of I:B and the company. We decided to do it now vs later so that we can iron out issues with a smaller number of more technically savvy users.

You named the interceptor ‘fighter’ again.

Great to see the sizes pinned down!

Doh, I need to stop writing our updates at 1am

Doh, I need to stop writing our updates at 1am

It’s named ‘Fighter’ in the renders too.

Just call it a ‘Fighterceptor’ and be done with it.

Can we expect the release of the new version this week? One more question: I was unable so far to assign more than 4 axis (two sticks) to my hotas. The input testing tool that was provided also didn’t recognise more. Was this fixed? Is this maybe related to the input method?
Was anybody here in the forum maybe able to assign roll, pitch and yaw to different controller axises? Any help would be apprechiated.