Hey everybody. It’s been a while since the last weekly update, as we’ve been pretty busy on a certain number of topics. First thing first, we are slowly preparing for our Steam launch in Early access. We’ve set up a store page, which you can see here:

You’ll notice a bunch of new screenshots on it, however the trailer video is still the Kickstarter’s. We’re not ready to produce a gameplay trailer just yet as we need to finish texturing all the ships and replace some of the placeholders before we can do that. We’ve planned to work on the first visual polish phase next month and work on the trailer will start around July. In parallel, we’ll keep iterating on the gameplay and content.

Needless to say, now that we have a store page, even if it’s rough around the edges… it’s time to gather WISHLISTS

As you may know ( or not ) Steam’s visibility algorithms on release are mostly based on the amount of wishlists, therefore it is of utter importance to our success to get as many wishlists as possible.

We have ~4 months until the Early access is launched, so from now on, we’d like to ask everybody who references us on websites, content creators, youtube / twitch streamers etc… to add a link to the Steam store page along with a small typical “Wishlist Infinity: Battlescape on Steam” message if you can. If you already have a direct link to our website, you can keep both of course. On a side note, since we now have a Steam store page we decided to stop our IndieGoGo on-going campaign so it shouldn’t be referenced anymore either. Thank you for your support !

In other random development news: the asteroid rings are back. A patch will go up next week ( ETA: Friday the 24th ) with a bunch of fixes related to rings. This patch will mostly contain bug fixes and small gameplay adjustments, nothing major. Most of the programming effort is still going into the UI. I should be able to start on the star map and ship spawning / uprade menus next week. It’s been delayed a little bit due to the recent focus on the Steam store page.

Kristian is wrapping up the textured Bomber. It should be available in next week’s patch. After that, the Corvette is next and should take ~3 weeks of work. The remaining time ( until the trailer ) will be focused on the Carrier.

Jan is finishing up the upgraded station modules with ambient occlusion. We haven’t put an entire station together, so there’s some amount of surprise on how it’s going to look like with all the upgraded modules fitting together. Expectations are relatively high, with new geometric details, more material variations / cuts, decals, emissive windows, colors and it should look a lot less flat in shadowed areas with ambient occlusion.

Dan is on a judo competition in Japan and should be back next week. Since he’s away, things have been going slow on social media / updates. We’re planning on hosting a new Community event on the 25th to celebrate his ( victorious? ) return.

As usual Keith is working behind the scenes on various backend / website related tasks; last week, he upgraded our payment system to support a wider range of payment types. We’re also starting to figure out Steam’s authentication and the backend changes needed to support a smooth user experience. More news on that in the upcoming months.

Will backers be able to obtain a Steam key in the future?

Will backers be able to obtain a Steam key in the future?

We’re investigating. It would have backend and resale implications which we need to figure out. So we can’t give a definitive answer on that just yet.

Would it help the Steam page if we started posting reviews and adding our own pics/videos to the discussions? Because I’m more than happy to contribute

As someone who has watched this project evolve since around 2006/7, this is a profound moment for me. We are on the home stretch to a full release.

Congratulations on the milestone and all the best for the final crunch. I’ll spam promote the link wherever I can

As a long time Steam user, that is great news.

Congratulations and thanks for all the hard work.

Well think about gog and eps 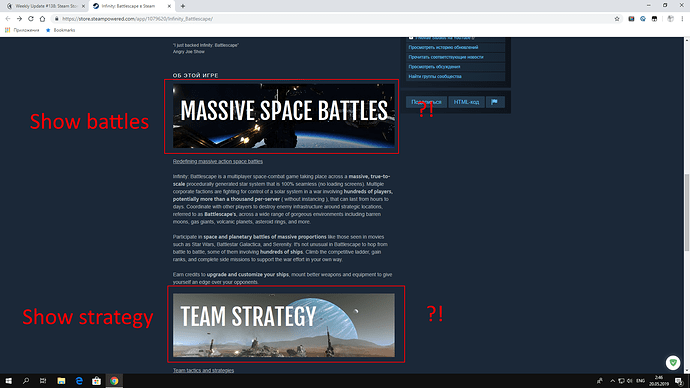 This is just version 1, we will iterate on the page as we get better screen shots etc.

the asteroid rings are back

Well, this is a super exciting milestone! Way to go, guys! I’m going to wishlist y’all so hard!