I have a question for @InovaeFlavien

In the 5th screenshot(same one you used for the weekly update) why isn’t the shadow on the rings darker? My first guess is that the light from the moon’s host planet is lighting it up but that’s out of the frame and I don’t know if it’s actually there. I know I’ve seen screenshots where the shadowed rings are nearly blacked out ala real life, they seem very bright in that shot.

[quote=“Skyentist1, post:12, topic:2657”]
In the 5th screenshot(same one you used for the weekly update) why isn’t the shadow on the rings darker? My first guess is that the light from the moon’s host planet is lighting it up but that’s out of the frame and I don’t know if it’s actually there. I know I’ve seen screenshots where the shadowed rings are nearly blacked out ala real life, they seem very bright in that shot.[/quote]

The rings aren’t fully opaque and are scattering light, even in reality ( cf Saturn’s rings from the unlit side ). The problem is that if you treat the rings as an opque object, then from a distance seen from the unlit side you won’t see them, as they’ll be pure black. So I increased the amount of ambient light quite a bit to simulate that effect. Might have to tweak the values to make them darker, it’s just a matter of finding good settings.

Thanks for the reply. If my opinion counts for anything, I wouldn’t mind seeing it darker as one would in life. 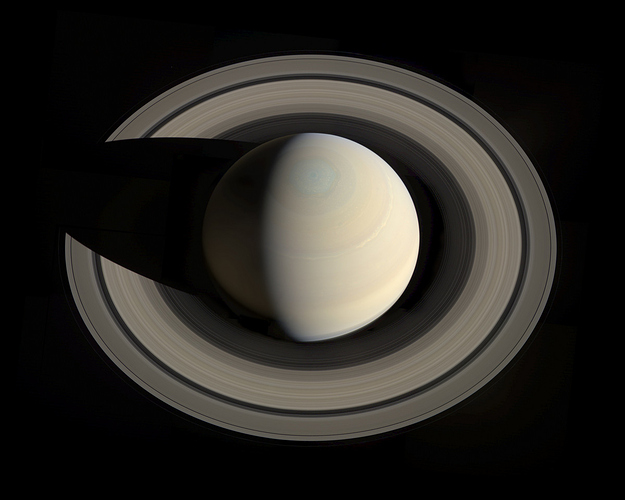 Yes, but my point is that if you make them black like in reality, if you’re on the unlit side the rings becomes invisible. It looks strange.

Ahhhh I understand what you mean now. Well, I would be a fan of as dark as possible but still able to see and play and obviously will require testing/tweaking stuff.

I’m sure you knew this Sky, but for anybody wondering, it’s gameplay over realism when the two disagree.

However, that said, I would like to see pitch black/invisible rings. It would be a good place to activate active sensors to display the rocks on the HUD, or hide in.

I’m sure you knew this Sky, but for anybody wondering, it’s gameplay over realism when the two disagree.

That’s what I meant by tweaking it and finding the best compromise. I would definitely lean towards gameplay in that case as well. Seeing pure blackness isn’t fun and I didn’t think about what would happen if you were in the ring at that point.

funfact: I had a total brainfart and actually had to thesaurus “agree” to think of compromise. Just one of those times you can’t think of the word and you know it exists…

I’d bring the ambient light down a notch. Right now the shadow looks too subtle.

it looks strange because we are not used to see rings in reality (just in pics) but i really apreciate when games takes real darkness into consideration, i loved how minecraft used that in some degree, and i missed that in games like GTA V. I think you still can have real darkness without being annoying for gameplay, using the HUD and the ship’s light source. If there’s something i hate from ED and SC, is the space ambiental light and the lack of darkness, it looks like a ps1 space game, even FFVII pulled that out better on the Sephiroth meteor’s sequence…

I think you still can have real darkness without being annoying for gameplay, using the HUD and the ship’s light source.

I completely agree, I dislike games that artificially increase ambient light for gameplay purposes. I’d rather have real darkness and a switchable night vision mode for navigating in the dark.

yea, too much light makes it feel non-empty, thus breaking the immersion, since space is actually very, very dark (in terms of visual wavelengths) any source of light will eventually hit a dust cloud, or dissipate through the non-absolute vacuum, yea it’s vacuum, with ~ 1 atom per cubic meter, but the distances are high so that actually is something. But in terms of local light, that means nothing, you won’t see light dissipating in space unless you leave some gas spread around you, wich won’t last long anyway. Giving some light to things that should be in dark, for me, kills immersion, in a game that even being battle oriented, its bigger feature IS immersion.

Rings aren’t black. The question is how dark they really are.

Rings of saturn eclipsed by the sun. Wikipedia says the brightness is exaggerated, by how much (x10, x1000, x100000) is anyone’s guess. The point is, rings aren’t pure black, there’s definitely some ambient lighting on them due to light scattering.

we know they are not “black”, but this is the same as you get into a forest in a moonless night, the eye will try to adapt to the darkness and you will be able to see a little, but even the eye has it’s limits, and you will just see some details around you, and as the game is made for humans, our eyes are not made to see in the night, or in this case, in enviroments where light sources are not enough for our naked eye, in other words, in the “shadow” part of the ring, we shouldn’t be able to see our sorroundings clearly, yes there is light scattering, yet there are also rocks blocking light as well, stopping the light scattering, bes thing we can do to judge is to see the actual pictures and compare them to the night side of the earth, for references.

i love to camp at forests far away from any town/city, and in the dark nights, you can’t walk into a forest expecting to see anything, you just simply can’t, even with the light scattering on the athmosphere from the daytime part of the earth, you will barely see whats around you as far as your arms can reach, with a lot of eye effort and adapting time, but i bet a cat would be able to see several meters away

Yes, the ring’s disc can reflect light and scatter it, but it doesn’t work horizontally, not enough at least to make the same effect of having a moon, ie.

Another example, is what you can experience in the moon, in the shadow parts (behind a rock, ie), i read somewhere (gotta find that) you can’t see anything without reflecting the sun light directly from your suit, or using a lantern, if both, you and the object hide from the sunlight behind a rock, you won’t be able to see anything on the object, not because there is no absolute light, but because the human eye just can’t do it with the small light amount reaching you.

i might be wrong in many things about this, but for me, being able to see the ring’s particles in the shadow side, won’t feel right, not just because i think so, but my own experiences and the non-so-big knowledge i have about open space, and every time i read about stuff about light and heat in space, shadow zones, radiation and heat are always an issue.
Then again, the best we can do is to contrast pictures of earth and saturn, and try to judge with that, and data, of course

Also, i’m honored to get to chat with you Flavien!

it’s gameplay over realism when the two disagree

See, the problem with this mantra is that, until the gameplay of a realistic system is actually user tested, it assumes a priori that realism doesn’t make for good gameplay. There are cases where this is obviously true (travel times in literal years clearly aren’t acceptable), but the opportunity for emergent gameplay from so many realistic scenarios is largely unknown. Because no one has bothered to test it, or if they have they haven’t reported on it.

i totaly agree that some realism has to be bypassed, in order to have gameplay, if not we would be stuck in one planet for thousand years! i mean, we barely visited the moon, we can’t stick to realism for this, but in the case of lightning/shadows, this is not giving more gameplay, it’s extending one kind of gameplay sacrificing another, the oportunity to hide in the shadows as your escape route, no, you can’t there’s no shadow zone, just a not-so-shiny zone where things are the same as they are on the light zone … just like GTA where you can drive with the lights off and see everything clearly, unless you use contrast to the max and adjust bright, but then daylight happens and you have to adjust everything back…

This is true. IMO a large user base must used to completely test any “controversial” aspect of gameplay.

However, in this particular instance, Flavien said it ‘looked strange’, and it was invisible, because it was so dark. So in that regard, realism was ‘tested’, if only by one, possible two or three persons.

The mechanics simply aren’t in place yet to allow for player interaction in a completely dark area. If mechanics such as active sensors (see my mega sensor thread, having possibly the biggest single post on the forums

) were implemented, then a type of RADAR/LIDAR would allow for the players to navigate through that area.

Otherwise I’d side with Flavien’s decision, because not being able to see where you are going in a certain area pretty much eliminates that area from ever being traversed by players. Not that an entire planetary system isn’t enough, though.

EDIT: Or a huge buff to ships’ spotlights.

well someone finally remembers that ships have spotlights, which would work wonderfully outside athmospheres, the element to go into dark zones is there, there’s no need to kill immersion in sake of gameplay, we have SC for that

How many times did I support both sides? /shrugs
(would make a terebel [spelling] juror)

Based on the way those textures on the ship blur, I think this game needs some Anisotropic Filtering.