I’m not sure where atmosphere and organic life falls in the development scheme. It seems to be a common comment. If you add terraforming into the lore and / or a major scar on the surface; that will buy you time. For a start, just rename the ground facilities to “X Atmospheric generation facility”. From a PVE/PVP aspect; building and defending a terraformer can be introduced. You could even have destroying the terraformer lowers the pressure for capitals to more easily enter the atmosphere.

Due to the current limited resources and budget, it is not possible to implement these functions in the near term, but it does not mean that it will be impossible in the future.

We actually had some limited development of plants on the surfaces of the moons in the past. However it hasn’t been a high priority for us. 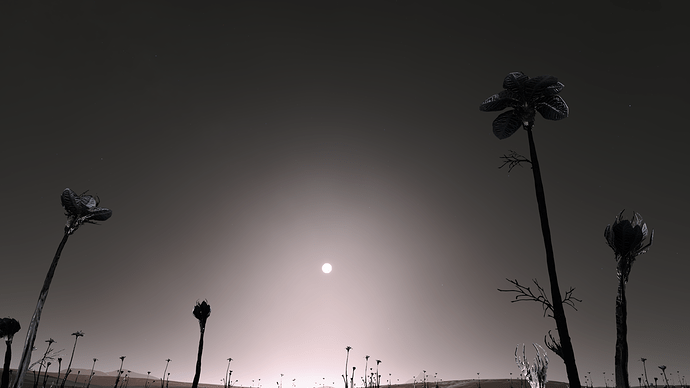 The Moons of the Infinity: Battlescape planetary system. The video contains a few clips with examples of vegetation on the surface. Limited implimentation, during our Kickstarter.

There is actually a significant amount of lore devoted to the terraforming and pollution of planets within the Infinity Universe. The Starfold Confederacy (SFC) (current ships in game) for instance, will exploit worlds for their resources, and in most cases do so without regard for the local biosphere.

The Astrialis Collective (AC) (formerly Centauran, not featured in I:B) on the other hand upholds a philosophy of “Harmony,” that whatever action a being takes should essentially be balanced. Terraforming would be a violation of that Harmony. Their views can bring them in to conflict with SFC and EO Corporations & Governments which operate near AC territory.

The Eridaan Order (EO), the third major faction (not featured in I:B) falls somewhere between the SFC and AC when it comes to environmental philosophy, and wouldn’t be against the further development and Terraforming of new worlds so long as proper protocols are enforced, and the proper diplomatic and economic impacts are understood before “breaking ground.”

That’s a taste of the existing lore in the universe, much of which is still in the works and has not been addressed for many years. (I love it though)

That being said, I:B is a combat focussed game with the intent of developing those specific gameplay features that directly impact the combat experience. Any additional features, while interesting, fall outside of our current scope and budget.