When was the last time you heard about someone dying of plutonium poisoning? I doubt the ancient Assyrian would have done as well, even assuming they knew how to keep it in sealed containers.

(Weapons and nuclear industry generally use 239Pu of which the Assyrian wouldn’t have much use, but the metaphor should still hold)

No, I meant the means of keeping up with such a ubiquitous means of power as a cheap M.E. Thruster technology.

ME tech as generally conjectured changes the world so much that it’s hard to wrap your mind around all of the critical consequences.

So I’m imagining something like this, in it’s simplest form a rod with two capacitors on each end, in the middle of the rod a motor that spins the rod clockwise and at the “front”/“east” end of the “spacecraft” a magnet orientated with the negative end toward the rod.

System of operation is as follows, the motor spins the rod, at the “north” pole the “north” capacitor get’s charged, once that capacitor reaches the “forward” magnet, it is discharged into the vacuum by a short circuit.

What is charging the capacitor? What is compelling the capacitors to discharge into the vacuum? You can only short out a circuit if the electrons have somewhere else they’re compelled to move to. A region of lower voltage or charge density. Unless you’re actually ionizing the materials in the capacitors, that isn’t going to be the vacuum of space.

Theory of motion being that while the capacitor is being charged in the north position the force is directed south,

What force? Why is there a force applied toward the south while the north capacitor is charging? Because of the magnet? The magnet’s attached to the rod, no? That would make this an internal force. It won’t move the rod any more than you’ll move your car by pushing on the back of the front seat while sitting in the back.

at discharge, the electrons should travel away from the magnet applying forward force.

If these electrons are actually being discharged into the vacuum, as you assert above, then this is just an ion drive. We have those already. They’re reaction drives.

Forget about the magnet for the south force. If you had a 1kg iron ball in a container that weighs less than 1kg and you pushed that iron ball from the south position to the north position, with a linear actuator or pulled it up to north position, the whole container move south. Now it should be the same thing with energy transfer, right?

(This however is not repeatable, as you would just be spinning the container around the “iron ball”/center of mass, hence my idea to discharge the “mass”/capacitor.)

I was wondering about the discharge of electric charge in space, so you actually need to have a medium to discharge it in, it wont discharge into a vacuum. Out of curiosity, what happens when you short circuit something in a vacuum?

Out of curiosity, what happens when you short circuit something in a vacuum?

Pretty much what happens when you short circuit it in another medium. The conductor you use to short circuit “something” will heat up. Depending on the temperature, releasing that heat as black body radiation.

If you have two unconnected poles of a voltage source (Like a charged capacitor, Chemical Battery, Generator) and hold them out into vacuum, nothing will happen as there are no free electrons or ions inside that vacuum to transport the charge across the gap. Increase the Voltage enough and the electric field will rip atoms out of the ends of the conductors and fly them over the gap in the opposite direction electrons would do. But that’s an extreme case and not a short circuit but an open one.

Normally you use a low electric resistive material with free electrons in them to short circuit the source. The electrons then move in a circle (the circuit) trough the voltage source and the “short”. Transferring energy to any load in the way.

I suppose my primary concern is if you are able to shed the energy in the capacitor, I suppose you could just transfer it through a resistor and hope it radiates the heat. What would an efficient way of shedding that energy be?

The best way is to use matter as a heat capacitor and then dump that matter. But I think we made it clear that we don’t want any matter exchange as we want none of that.

In space there also isn’t any medium outside that could take up that heat energy. On earth we mostly use air for that purpose. Flow cool Air over a radiator with lots of surface area to transfer the heat onto the Air.

So you are left with transforming heat energy into something else. Which is really hard to do and one of the most annoying things when it comes to heat energy.

Black Body Radiation is one way to do it.

Actually a short circuit with radiators would do the job. Maybe heat ex-changers … I don’t know, not my expertise.

Here’s the heat radiator of the space shuttle: 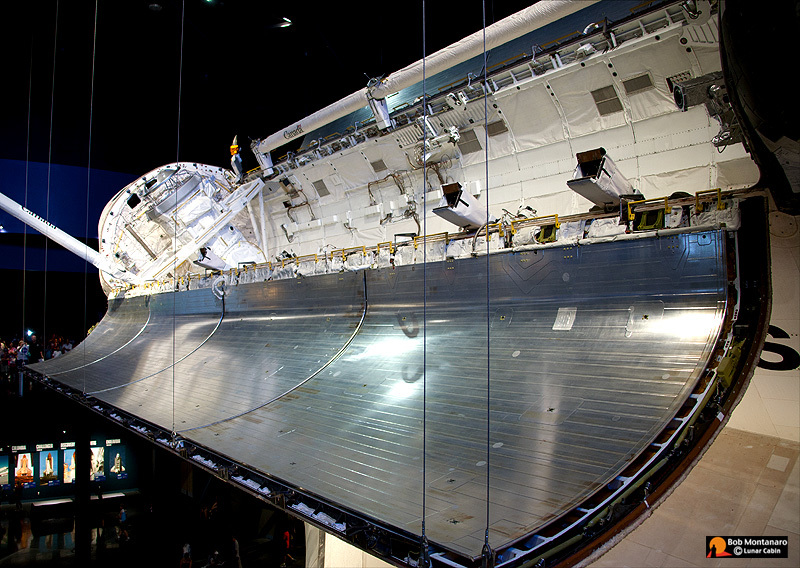 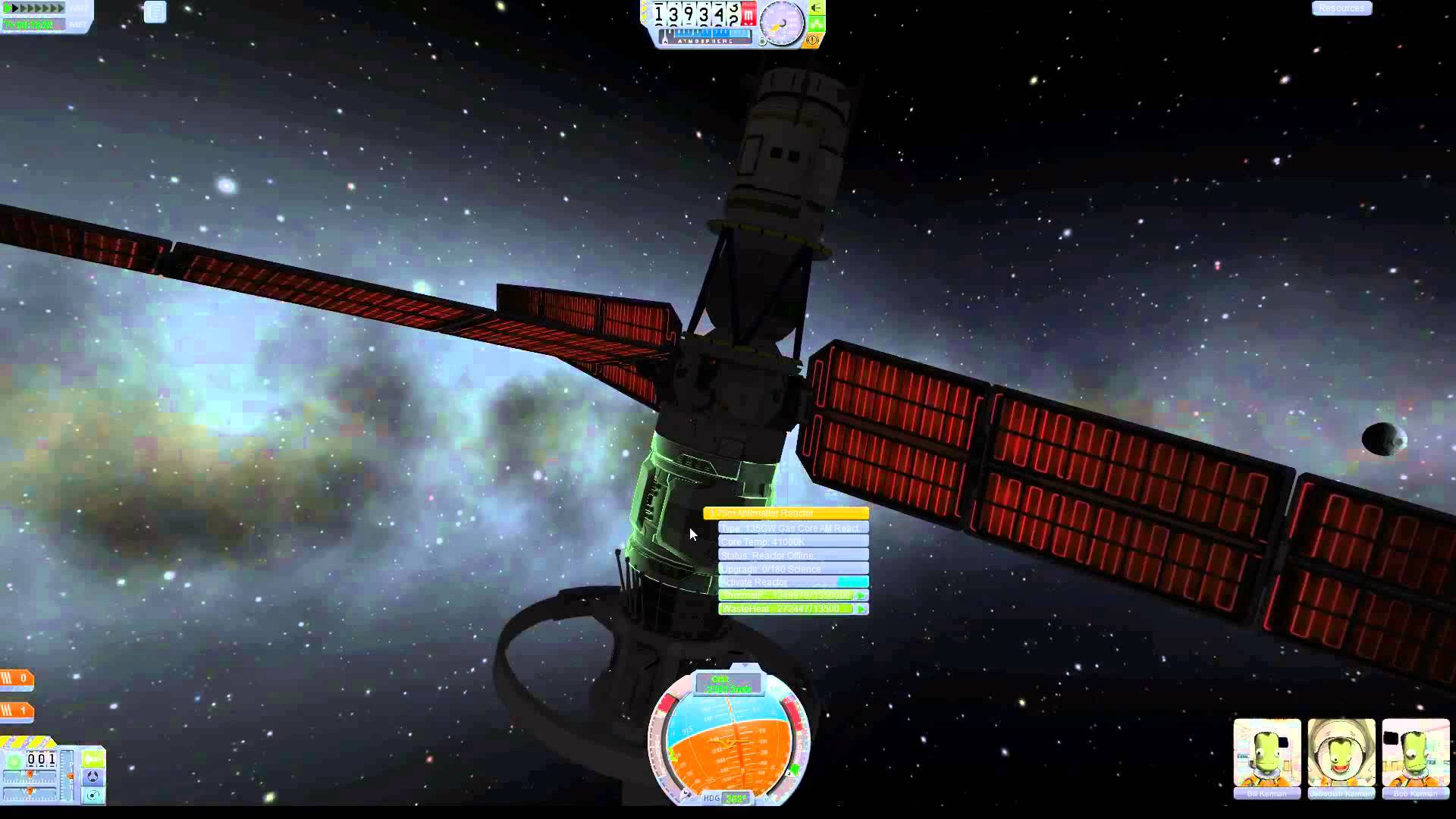 Pretty much what you asked for. 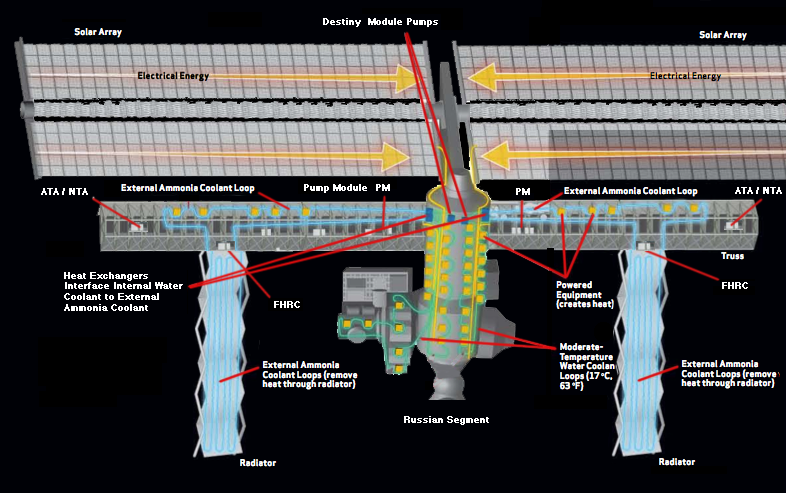 But you can directly run current to resistors to dump that energy into a radiator. Much simpler.

Another idea is to instead transforming the electric energy into heat energy and then to EM energy we could use some of the cool inventions that transform Electric Energy into EM directly:

All are sadly not 100% efficient and transform some of the electric energy into heat energy, so a radiator is always needed.

my flashlight can transfer electric energy to EM energy pretty well. What if you put a lot of them outside your ship?

Well, at the scale I’m thinking off a single LED or a few would be more than enough. I wanted to put LED there too. Though I wasn’t sure how it compared with the other techniques when it comes to efficiency.

You get a photon drive. It’s pretty much like any other reaction drive, but you throw photons the other way instead of atoms or other varied particles.
Potentially very efficient Isp-wise, but requires 300 MW for each Newton of propulsion. If your flashlight is a high-efficiency one as well as the energy source powering it (I recommend micro-black hole mass-energy convertor), you have one of the best space drives out there (as well as a pretty impressive WMD, but with this kind of tech, far worse ones should already exist).

The beam won’t cool your ship down, however: the flashlight would produce waste heat, not get rid of it.

No, I meant the means of keeping up with such a ubiquitous means of power as a cheap M.E. Thruster technology.

ME tech as generally conjectured changes the world so much that it’s hard to wrap your mind around all of the critical consequences.

Short term, if the emDrive worked, governments could put a strong control on it. After all, all governments (even North Korea, I would think) would have an incentive to prevent some clown driving it half-way to nowhere and back at literally Earth-shattering end-speed.
Long term, nothing. At some point, some clown will drive it it half-way to nowhere and back at literally Earth-shattering end-speed.
Longest term, we are in the realm of stellar if not galactic engineering (Dyson spheres, central black hole-powered galactic energy grid…) and far-out technomagic, so there may ways to stop it from impacting important stuff well in advance, stop it from working where it shouldn’t by changing the way local physics work, or even rebuild the important stuff later. I would guess that when you start dismantling galaxies to attempt timing attacks on reality, you should be ok.

Concerning the first part of your reply:

The beam won’t cool your ship down, however: the flashlight would produce waste heat, not get rid of it.

We know, but we were looking for ways to dissipate energy from the ship. The thrust is a mere side effect. Important is the energy the photons carry away. Sadly LED or Laser Systems aren’t 100% efficient and transform some of the electricity into heat. But up to half of my previous post we had 100% heat energy, now we have less, sure that heat must be radiated away but it’s a advancement.

And concerning the whole WMD ethical scare poblem I see come up in these threats. That is simply no argument against such technology being possible.
We were discussing a system that isn’t at all generating energy out of nowhere. We pull it in trough Solar Panels and try to use a minuscule physical effect to turn that energy into kinetic energy.

That is simply no argument against such technology being possible.

Indeed, only one about how it would be very, very bad news if it was actually working.

We were discussing a system that isn’t at all generating energy out of nowhere. We pull it in trough Solar Panels and try to use a minuscule physical effect to turn that energy into kinetic energy.

Ah ok, sorry I misunderstood. So if I now understand correctly, you want to turn stored energy into kinetic energy (tell me if I still got it wrong).

The best way is indeed the photon drive. The most efficient your emitter, the better. Now, this is assuming that you have no spare mass to use as reaction mass. Otherwise, you can go, for example, for a ion thruster (what more and more satellites are using, btw).

It’s the thing from the Opening Post. Just with an outside Power source and sink, which would eliminate the problems pointed out in the first few responses.

Cybercritic also came up with his own design and asked if it would, purely Kinematically, work … but looks like no one knows abut that here, and his question hasn’t been answered yet.

Cybercritic also came up with his own design and asked if it would, purely Kinematically, work … but looks like no one knows abut that here, and his question hasn’t been answered yet.

I’m still hoping that @Kichae can clear up the transfer of energy/mass thing.

Alright, I made a little animation of the system I was describing.

So where does your angular momentum go?

Keeping a constant spin on the device and firing the LEDs at either end when they’re pointing “backwards” would indeed be a valid form of propulsion (if keeping a constant spin in the way shown is possible), but simply having 1 LED shining constantly backwards, possibly rotating around the direct vector for spin stabilization, would work better.

As you can’t move a closed system by shifting its bits around, I suppose it is a type of open system. But I can’t figure what it is (I’m not at my brightest right now, mind you).

Is it something akin to David Brin’s Tank-farm Dynamo?
(The important plot point here if you don’t want to read the novella)

It uses the same effect of what was posted in the opening post. It is an open system where energy is moving trough. The led releases the energy out of the system.