Since the z-axis/throttle stick on the T.Flight Hotas X currently doesn’t function properly I found a workaround:

Is this workaround still required or does it work now? The program mentioned in this thread - Universal Joystick Remapper - is no longer available.

Speaking of joysticks, we’ve detected a conflict bug between multiple devices that was introduced a couple patches ago. It’ll be fixed in the next patch ( in a week and a half ).

Its not necessary anymore. Works fine without it.
Here is a working profile for it:

Just put that in your “C:\Users\Username\Documents\I-Novae Studios\Infinity Battlescape\Profiles” folder and choose it in the launcher. The profile is made for the T.Flight Hotas X when it is connected in PS3 mode to pc.
Just toggle the switch on the backside from “PC” to “PS3” and connect it to the pc.(was easier to configure, but you can also make your own profile in PC mode)

So does it support rudder pedals?

You can have up to 4 devices. I have a Thrustmaster Warthog Joystick, Warthog Throttle, Saitek Rudder Pedals, and a vjoy device linked to TrackIR. I use VoiceAttack to manage weapons and systems.

This setup works in I:B Direct Mode. It works with all ship types.

Does anyone have an XML file to share for the Thrustmaster Hotas 16000M? (joystick and throttle)
Your help would be greatly appreciated

Isn’t that one of the default profiles?
Might have been outdated and thus removed lately. Maybe.

All HOTAS profiles are partially out of date. I’ll probably have a go at redoing the T16000M myself right before the release, but other than that the only “reliable” profiles so far are azerty, qwerty and gamepads. And even gamepads still need a couple of tweaks.

An nice feature in the long run would be some sort of marketplace were people can submit game control profiles that other people can rank and maybe donate ingame credits to the author. The community could then maintain the profiles and add new ones.

I made a new setup for the xbox controller including a keybindings screen.
While doing this I noticed several issues I would like to discuss here. 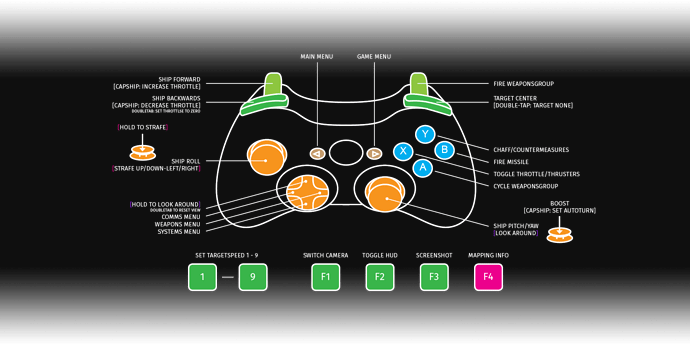 Here the profile if anybody wants to try it: 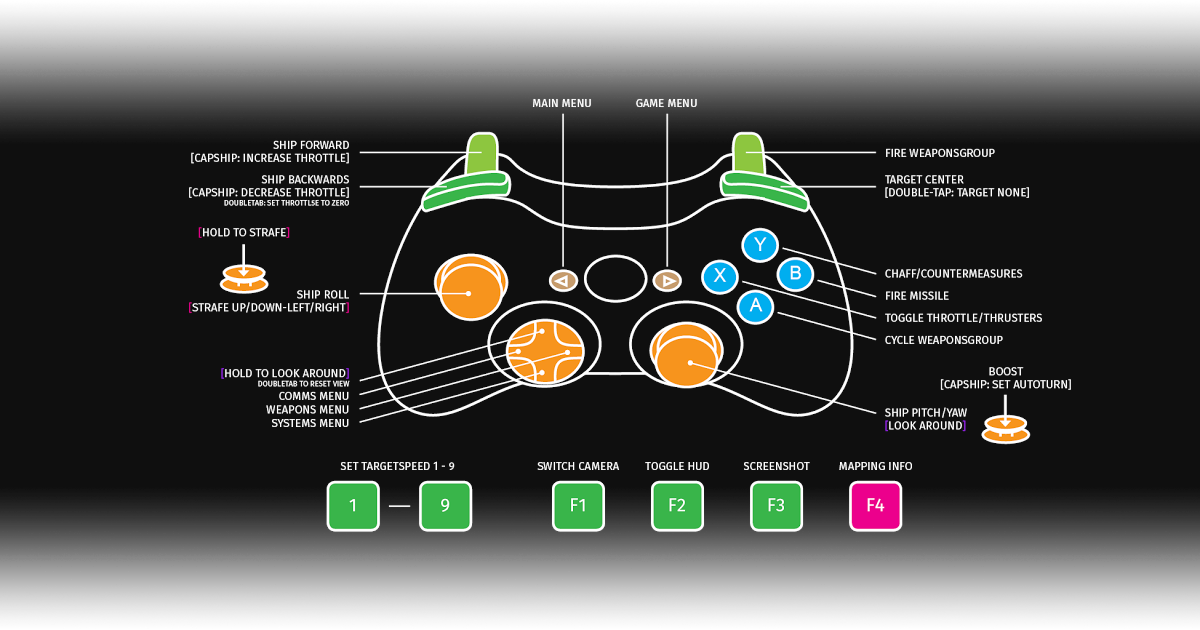 A lot thank from my side for your support !!!
Now Im able to use the T.Flight Hotas One from Thrustmaster with the “Dual rowing system” cause you made a special XML Data ! Wooow.

In fightactions im able to use my HOTAS like i do it in ELITE ! VERY NICE ! Some settings are not abel to use but thats the problem from the Devs.

For example:
In Elite moste every long holden button on the throttle makes very other button to have a second option. So i hope some one of the Devs using the ONE in ELITE like me and knows what i mean !
There we just have a plug an play XD - BUT I LOVE YOUR GAME !

Das alleine gebührt nur dir Playbenni - THANK YOU SO MUCH !!
That alone is only yours Playbenni
First time with Hotas at 15:12

in PVP like i do it in Elite with the same HOTAS and mostly with the same guns too XD - https://www.youtube.com/watch?v=YceNKrOR6Ko

I spend a while creating some generic profiles. Need some testing. They don’t need to fit perfectly but errors like flipped axis and such should be looked for.
Buttons will be at weird positions and at most one axis is allowed to not work. (Probably RotZ as I suspect different vendors to have bound it differently)
That’s pretty much the goal of these generic ones.

QWERTY is set as SecKeys as backup. With these Generic Layouts where the exact button position or even ammount of buttons is unknown it pretty much is required to have all the events that are bound by default as backups.

(Edit: Noticed, due to being too tired, that before sharing them I removed my joystick ID incorrectly which makes the files fail to load during game start. Fixed. Has to be “” for empty not “”)

(Edit 2: Learned that default for throttle is actually axis2 for some backwards reason … also switched roll with yaw because airplanes and people are used to airplanes … shrug)

Here are some valluable resources I “wringed” from the people over at the HOTAS/HOSAS/SIMPIT discord. 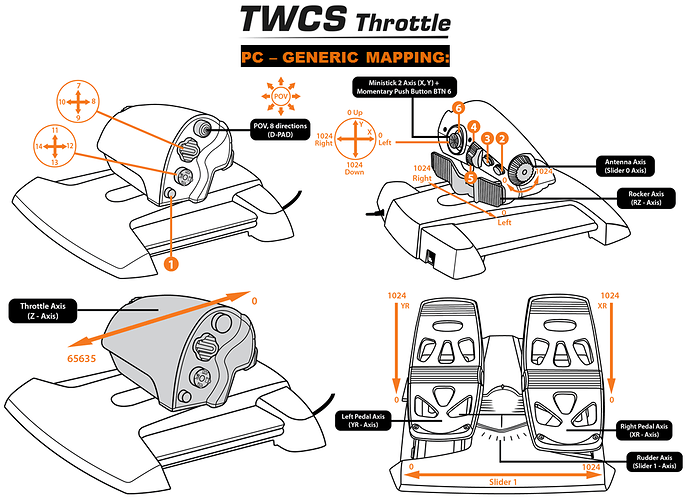 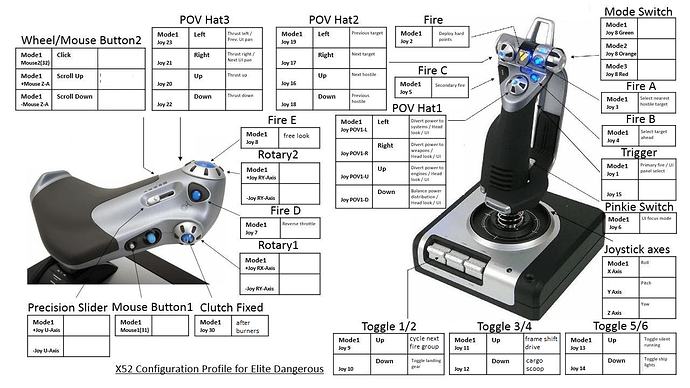 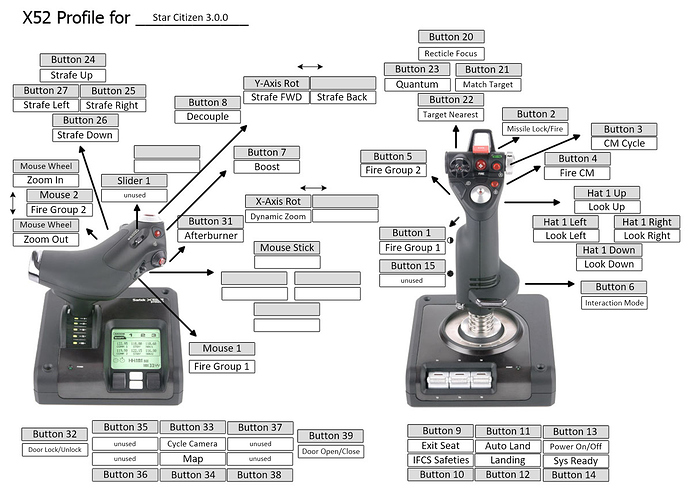 Then I advise you to google “hotas name” followed by default layout for exemple.
You’ll find this kind of stuff

Looking for some feedback/suggestions on my current HOTAS binds. I’m considering putting OC on the cyan throttle dpad, as it’s where my thumb rests naturally and is easy to control. Currently I end up struggling with OC on the 8-way hat above it, because it’s awkward to hit and I end up getting a diagonal instead. I’m not sure about it though because I don’t know if micromanaging OC is important enough to warrant it, and I keep thinking there must be something more important I can put on that button group.

The radials are kind of a pain to get to as well. Combine that with the fact that I am using head tracking for CursorX/Y and you have a perfect recipe for annoyance with managing systems and weapons. The deceptively obvious solution here is to put radials on the cyan switch but… no. I don’t need them that often lol.

I’d love some suggestions of things to put on the dozen buttons on the base of the joystick. I’m considering moving the radials there and putting CursorX/Y on the green throttle switch, but haven’t had time to play with how that feels.

I’m also trying to come up with something to put on the throttle ministick click. I used to have Brake there, but I kept getting overly excited in combat and putting the brakes on accidentally.

And I’m at a loss as to what axis to put on the antenna. I think when I get around to doing capship binds I’ll probably use that one for viewdist (currently mapped to the throttle on the base of the joystick, which I’ve just noticed isn’t labeled on this diagram, hmm). 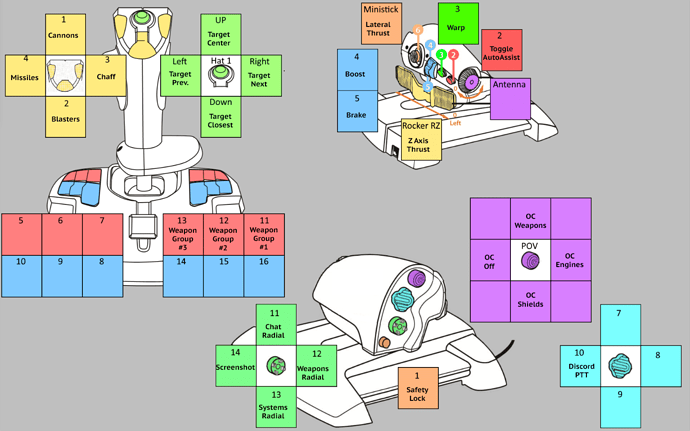 idle curiosity - does anyone play with dual joysticks? i feel like a throttle is kinda pointless when you can thrust in six different directions. currently i use a joystick to rotate in 3 axes and kb to thrust, but im tempted to get a T1600 for a left hand stick to use for thrusting. i’m curious if i have the mental capacity to truly take advantage of direct mode and let go of the constraints of atmospheric flight.

I think vertical thrust would be tough with a second stick. I’ve used dual sticks in a different game and once the novelty wears off it feels kind of awkward. There is at least one person on Discord that uses dual sticks but I can’t remember their name right now. Might be worth asking on there if no one picks it up here

I am using a Space Mouse Pro for strafing as well as general second tier functionality (warp, menus, select) and right hand with mouse.

Pro is that it definetly doesn’t feel weird as you kind of directly command yours ship to move where you “pull it” to … it does have limitations on how many axis can be used at the same time and also requires 3rd party software. I got lucky and got a new one for half the price, cost could be problematic too …

An alternative would be to use a throttle with a mini Joystick at the thumb, where the throttle controlls Forwarrd / Backward and the joystick controlls Left / Right and Up / Down. Additionally throttle paddels could controll roll or swap that with one of the joystick axis. That probably could feel alright as you also kind of “push” the ship to do what you want.

Maybe even a “spring mod” for the throttle so it has an easier time to return to zero.

For ships with fast rotational acceleration, I think using a joystick to control rotation is always going to be inferior to using a mouse.

I’d love to see Battlescape’s atmospheric flight model overhauled so that aerodynamics actually do something. ie If your angle of attack becomes too great your ship would flip out.
That would maybe make using a joystick for rotation in-atmosphere better than a mouse because the pilot would then be concerned with controlling their rate of rotation rather than simply rotating as fast as possible to face their desired heading.

Currently you can go as fast as possible in atmosphere, flip your ship into a 90° AoA and power off the ship and it’ll just maintain that orientation as if there were no aerodynamic forces at all… which of course there aren’t

There are but firstly, the atmospheric pressure is pretty low on the current moons unless you are close to “sea level” and secondly, there are no rotational forces, as far as I know, only lateral ones.

Last time I checked though While going fast in atmosphere and then deflecting at very high angles (>45degrees) I was able to see my velocity vector move (only in third person as I had to deflecting so hard).