Based on the EA roadmap on the upcoming HUD rework, Subsystem targeting and a Squad system, i want to “Give the Devs” a heads up on some basic things a truly functional Fighter HUD needs.

In this post, ill give an example of how in my opinion a functional HUD-Pilot Helmet VISOR should look like.

Keep in mind that this concept is for the INT ( fighters ) only, and maybe share some functionalities with the other smaller ships, ( CRV, BMB ), so its primary goal is like those of modern jet fighters with a futuristic gamey touch: https://youtu.be/ypIbmfm7n8A 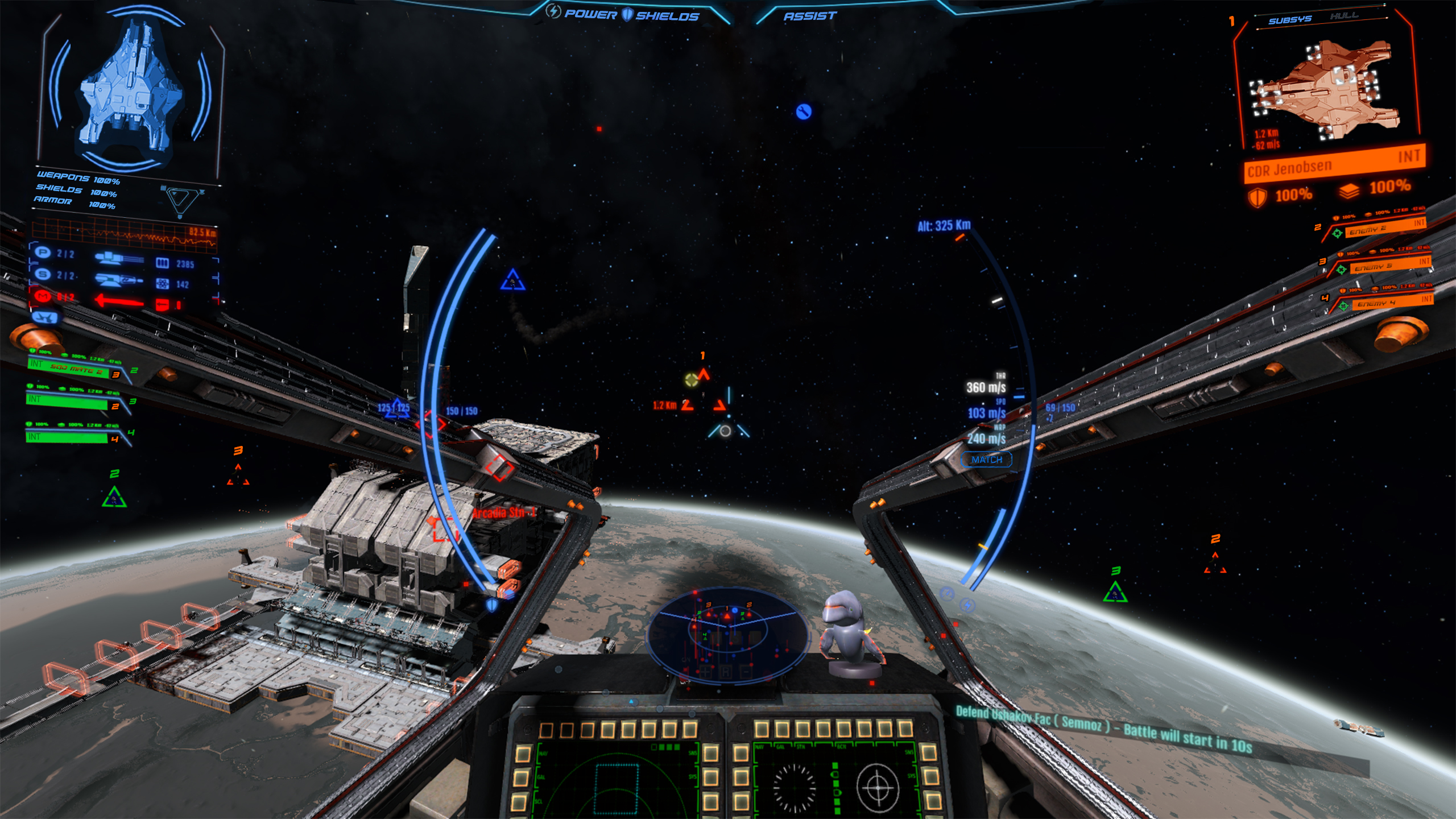 In this concept, i use a side and color quick identification system, in order for the player to be able to asses a situation fast and act accordingly. 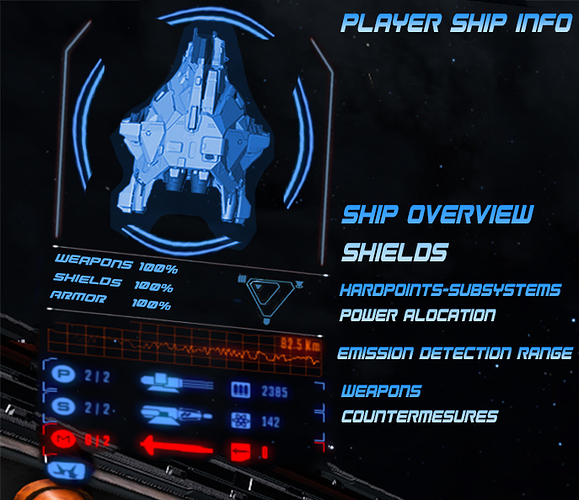 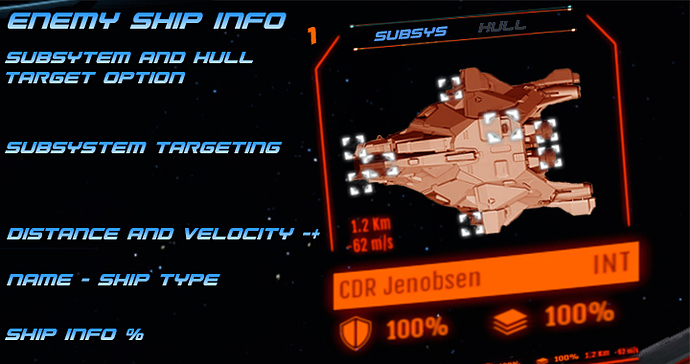 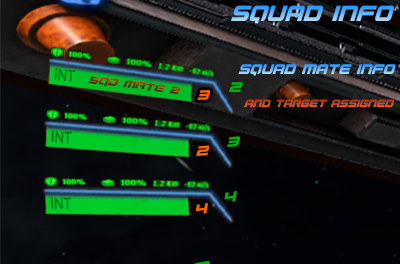 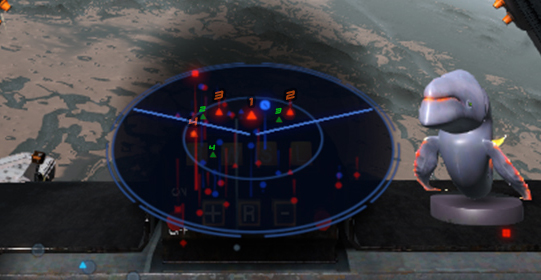 As you can see there’s a uniformity of color and numbers assigned to enemies and friendlies, on all three ways a player has to observe the battlefield, HUD, 3D radar, Battlefield outside the ship.
With a system like this assessment of a situation becomes extremely efficient through the synergy of muscle memory and the three way color system for friendly, enemy, own ship, info and status.

It’s extremely important for a player to know what info goes in each section of the HUD, in order for him to be able to decide if the blinking light that came on his HUD needs a focused look, or it’s not important enough and his peripheral vision is sufficient for a decision.
For example the Ships Annotation panel on the top of the screen.
Right now there’s nothing there except the occasional system info word, like ASSIST/LIGHTS/POWER/SHIELDS.
These systems must have a visually specified place, and to be separate as well.
Those that are vital electrical systems and can flash red if they malfunction in one side, and those that are normal ship systems on the other.

MFD’S
The ship’s MFD’S should aslo be able to show info like weapons, ammo, ammunition type, missiles, ship status and other.
Careful though, MFD’S and HUD/Visor systems have different functionalities and importance despite being able to show the same things.

Squad and Enemy Docking System.
Bellow I’ll give an example and the reasoning behind the squad and enemy targeting system i conceptualized above.

As i showed you on the corresponding pictures i used only 3 slots for squad members and 4 slots (including the current target) for enemy and friendly targets.
The reason for these numbers comes from a long experience from squad based games, and how many teammates and enemy units one can handle in real time while being on a dense battlefield.

How it functions.
The HUD has 3 available slots for Squad assignments and 4 slots for targets, where the player can use specified keys or in menu assignment in order to populate the slots.

Assigning targets and orders.
The ‘‘beauty’’ of a system like this is that it can be used for both offensive and defensive gameplay, and also is very quick in its use.

INFINITY HUD CONCEPT 2.jpg2560×1440 1.73 MB
It uses the familiar options wheel, and as you can see it has options for each member individually or all of them together. 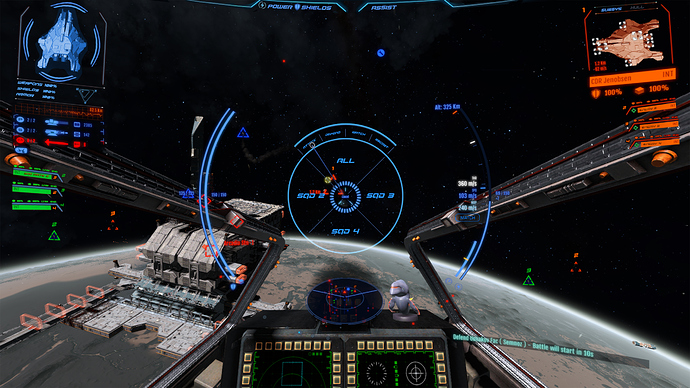 INFINITY HUD CONCEPT 3.jpg2560×1440 1.75 MB
When the squad leader chooses a target then he can open up the squad order menu and by dragging the cursor over the desired command, Attack, Defend, Watch, Escort he passes the target’s info and number to his squad, and target assignment symbol in his HUD.

The modularity of this system is very quick and simple, yet the possibilities are near endless.
For example: The squad leader can target a Capital and its escort, but instead of having 3 INT players in his squad he has 3 squad leaders, that they themselves have 3 different squad mates, one main target and 3 slots empty to assign themselves to their individual squads.

For this i don’t have something myself, and this is because i don’t think anyone can do better than the concept a friend of mine made years ago for Star Citizen.

Finishing, all this are a concept for the Fighter class, and based on my experience from years with different games.
All opinions are welcomed!

I like the idea of showing a larger representation of the enemy ship.
But to make it even more usefull I suggest using it as kind of digital zoom.
This way you could see which way the enemy ship is facing (which is vital information to have) and maybe also display If its thrusters are firing and which parts are damaged (in case of cap ship turrets for example).

I feel this is more lacking on capital ships, rather than fighters.

Capital ships need a way to show where your ship is orienting, as it’s often completely out of view as you’re looking off to another angle targeting.

But yes, basically like elite. Having a closer view of what way someone is facing is important.

I already (briefuly) mentionned it on Discord, but this is really good work. We’ve been working internally on similar concepts for a while now so I think there’s a good chance we’ll end up to something that is hybrid between what we currently have and what you are showing in this post.

A couple of personnal remarks from me:

Thanks for replying Flavien. It’s always nice to hear what you think.

In general, we’d like to get ride of the huge curved status bars around the screen-center ring. The problem here is that critical information such as hit points, shield points, speed etc… would then get moved further away, and players would have to glance at the screen corners / edges much more often than they currently do, instead of focusing on the action / aiming. If anybody has ideas to declutter the screen center, let us know.

My suggestion is to get rid of any text and numbers there. Only have bars and symbols. The number readouts can still be on the top left or even in a menu. The speed readouts for instance take a lot of space and I personally almost never use them. I personally also never use any of the values/MaxValue readouts or the “+5” energy thingies. I needed them once, to learn what the overcharge stuff does, after that I didn’t really care how much the overcharge does, it is static for any given overcharge mode after all.

Then, reduce the size (primarily the length) of all the bars to about he size of the heatbar. Make them all behave the same way as the heatbar does:

The speed bar would be the only one that would stay on all the time, which could be weird because it could break symetry. Maybe rethink that one. I though of situations where it could also disappear, but that didn’t really make much sense.

It could be moved from the right - center to, for instance, to the top of the screen below the status info. Making it symmetrical will be a bit of a challenge though, it could be “center” = 0 “full length” = Max speed.

Embracing the asymmetry could work though.

The centre readouts are huge, but they do fall in a good distance between screen edge and center. I think making them conditional to show up, like already works well for the heatbar, as well as reducing the size would be sufficient to reduce their effect on the general image in general.

Another idea is to add physical slim MFDs to the cockpit rails doing the same. This would have many other different problems though.

Looking forward to other ideas.

First off, thanks for taking the time to review and comment on my post.
Second, all those are supposed to be animated, in order to reflect the battlefields info in an easy to comprehend form.

I’ll try to further break down the thought process and functionality of every bit you mention one by one.

The default view for the Target window is a real time representation of the targets pocition reletive to yours.
So, if he’s directly looking at you then the window will show the ship facing you, and visa versa.
Why? Because you can have better judgement on how to approach, or defend on that tiny dot 2000m away.

On ** BIG** ships that animated view is also fine by simply scale them to fit.
What you’re seeing on my concept is the Subsystems targeting selection screen.
How this is supposed to work?
When you target a ship you have 3 view modes to choose from, the Real time holo like i mentioned above.
The Subsystems targeting view which is displaying the available subsystems/weapons on a ship, and the player can change between them like changing targets now.
So when players choose a target the targeting pips change in order to calculate the specified targets new impact point.
In this view the pilot only cares about his target, so in the window the view on big ships is a zoomed view of the Subsystem we chose to attack.
Example: left side cannons turret.
At that view the shields holo representation can’t be seen, but having them on text next to other vital info is very useful for having an overal idea on the proggres of a coordinated attack on the same target.
And finally Hull targeting , a fixed view that is like the top left and its functionality goes like this.
The target ship has the shields visible, so the player can see the proggres on breaking through, and the holo view of the ship has color coded HP display too.
So forget the red/yellow view you see on the picture.
It starts…
White = 100%< HP
Yellow = 75%> HP
Red = 50%> HP
This view is specifically for INT, BMB or smaller ships in general, where subsystem targeting isn’t important enough, as the targets HP is low and the dogfights extremely maneuver dependent.
In order NOT to take your eyes of the target during the dogfight and keep an eye on the proggres by your peripheral vision, and using the color coded function on your targeting window.

Finally for the MFD’s.
SC will go back to a completely modular HUD/VISOR comcept.
So any info on the screen can be interchangeable between MFD’s and Visor windows, i know this for a fact as I’m under NDA for SC.
So please, just let us have the the option to display things on some form of Visor windows.
Because despite MFD’s looking like a good idea in reality they are a pain in the ass to look at on a tiny monitor.
Thanks a lot again for your time, and if there’s a specified group of players that you discuss development ideas don’t hesitate to ask, i won’t mind signing another NDA if i can help you guys in any way.

My quick thought on decluttering the middle HUD part. 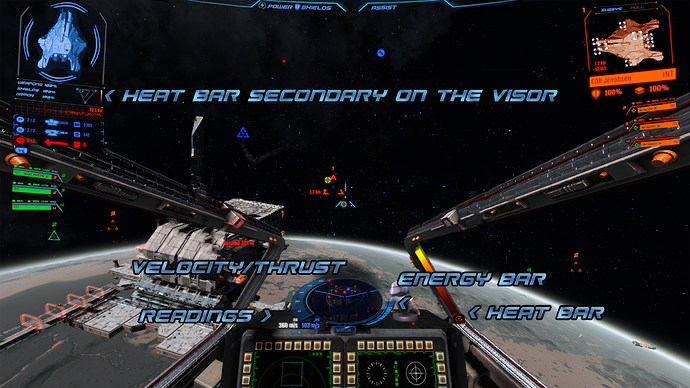 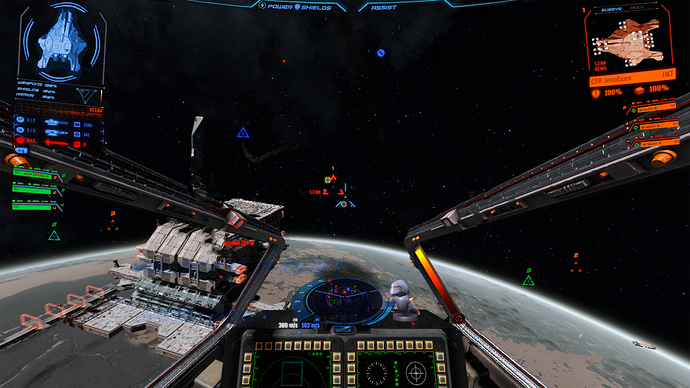 Today flew in a corvette, a very weak lead on the target, a small dot that mixes with the background of the stars. Not convenient to aim. And it’s bad that there is no description of the gun, what distance they shoot, and what is the spread.