I have not yet bought the game as waiting for TrackIr support but as this is coming in patch 7.3 that could be soon.

So I can setup controlling the game with a Tablet in advance could someone give me the Keyboard Map Graphic?

I control all my flight and spacesims with an Android app called SimDashboard (if they don’t have a dedicated app already). To date I have made complete controls for - Evochron Legacy, Wings Over The Reich, Wings Over Flanders Fields, Strike Fighters 2 and CFS3.

It means you don’t have to remember keys and it is more sim-like eg the Expanse Rocinante tablet control. You press the buttons on your phone/tablet and it controls your ship.

You run the app on your phone or tablet and you run a program on your pc. There is no lag as made for car racing sims.

An example and explanation of one for Wings Over The Reich is here:
https://simhq.com/forum/ubbthreads.php/topics/4508244/control-wotr-with-phone-or-tablet-sim-dashboard#Post4508244

From memory I thik it was about 5 USD to purchase the button box option in simdashboard. After that all my setups above are free to be downloaded from the community.

That sounds interesting, I’ve not heard of anything like that before.

I have not yet bought the game as waiting for TrackIr support but as this is coming in patch 7.3 that could be soon.

He hasn’t bought the game yet so can’t really.
At work now so can’t look it up, also, there are one or two things in the image that are outdated but that could just be pointed out.

Looks fun indeed and cheap too compared to other solutions. @Liveinthemoment do you have a post of your Battlestation so we may see how that looks while you game? Wonder how it works with the keyboard.

Yes here it is. 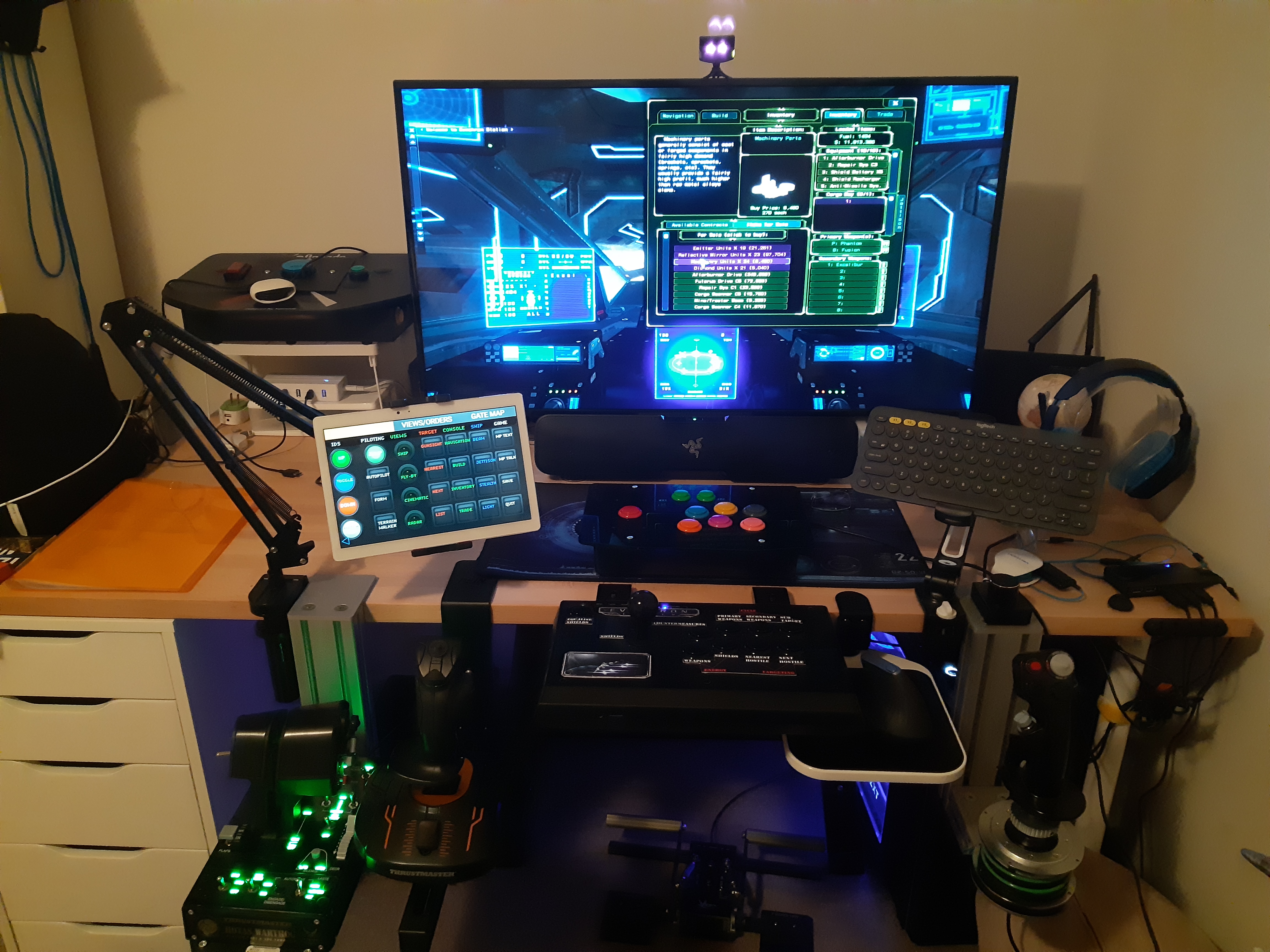 Wow. I expected something but this is quite extraordinary. Nice! 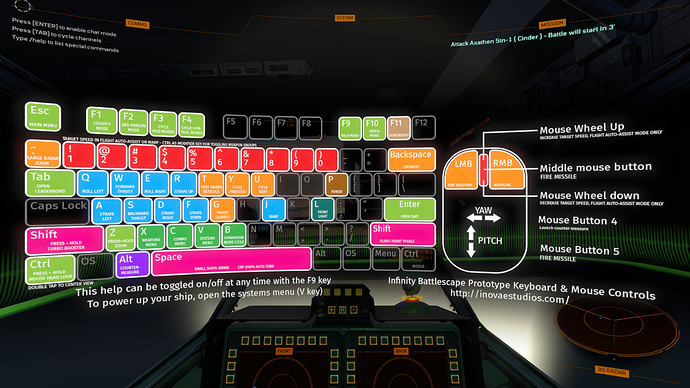 Hmm. It seems to already been fixed. So it should be accurate.

Also see here for a complete list of all events and their default bindings:
http://lomsor.com/inovae/Profiles/DefaultQwerty.xml

Thank you that is what I need

btw I got the green spring for the stick from a person in Poland. It makes the stick usable (much lighter) for spacesims imho.
btw2 on the back left is a pinball controller. I got the X-Arcade track ball one, gutted it totally, bought feather pinball buttons, got friend to put in extra holes (nudging, magnasaves), plugged old holes, connected to cheap zero-delay street fighter circuit board and run using joy2key so result is no lag and can play sitting down (both game and joy2key on windows 10 need to run with admin priv), So all up about $100 AUD.
btw3 I don’t play FPS et al. So I bought a relatively cheap large 4k monitor (better for sims than 3 screens as better up down and less side stretchy distortion with trackir) which I run at 2560 by 1440 at 60hz. For sims with trackir I only need about 25fps+ in xplane et al (1080ti). Only game I run at a higher resolution is Pro Pinball Ultra Timeshock which I run at 4K.

Does anyone have any graphics I could use?

Have you ever tried if you could force it to accept higher framerates? I also have a 4k Monitor and am able to run it at 120hz at that resolution and below by manually creating a resolution profile in my GFX driver.

What kinds do you need?

In my case I don’t even need 60 fps but may look into that if decide to get another connector, so that info maybe very useful for some future game, thank you

I would like Infinity Battlescape specific icons and backgrounds for the purpose of making a better simdashboard for it, if anyone can share.

You might wonder why I am doing this prior to buying?

I built 80ish xplane airports before really flying in it.

For some reason I need things setup before I use them…

I am making a new account with a new email address.

I just bought the game and don’t want to enter my gmail password to run the game.

Just letting the nice people in this thread know

I was thinking - if someone could with pencil and paper draw what they think would be a good dashboard then take a pic with the phone I could then build it?

Any experienced players want to help?

Hey, hope you are having fun.

I would suggest to look in the cockpits of the ships for inspiration. Especially the Interceptor and Bomber have some expansive button and switch layouts on the bottom left and right of the pilot.
That would be fitting I think.

Now that is a great idea thanks!

What do you think of these controls? Is something missing or something not needed?

I would like Infinity Battlescape graphics, these buttons are for Evochron Legacy for which I have 4 screens (one is a map). So don’t be shy if you think another screen is needed (I have 3 screens for strike fighters 2, wings over flanders fields and wings over the reich as well).

Anyone got a background and button icons for IB?

Also is there a map screen? 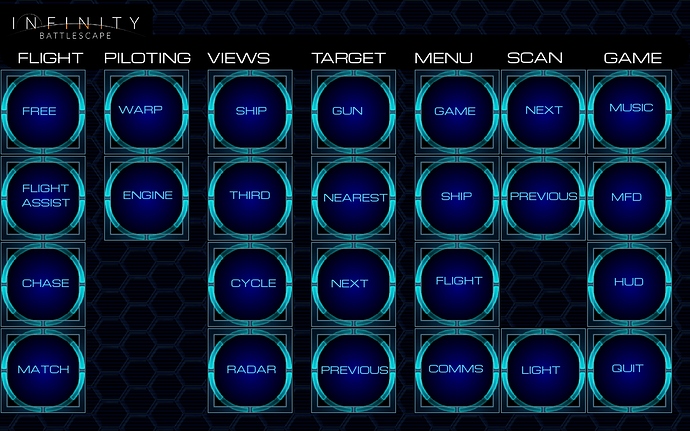 What do you think of these controls? Is something missing or something not needed?

I would like Infinity Battlescape graphics, these buttons are for Evochron Legacy for which I have 4 screens (one is a map). So don’t be shy if you think another screen is needed (I have 3 screens for strike fighters 2, wings over flanders fields and wings over the reich as well).

Anyone got a background and button icons for IB?

Also is there a map screen?

There are buttons but they’re rectangular, iirc we don’t have anything that is square or circular that would fit that style, so somebody would have to make custom ones.

Flight settings are a bit off, as Flight assist is a special toggle ( “decouple” mode basically, your flight computer no longer compensates / stabilizes your movements ) and has nothing to do with the formation modes ( free / chase / match… you’re missing orbit there too ).

There is a map screen but it’s part of the UI ( you open it with tab ). The “radar” event has been renamed into sensors tactical screen.

I’m not sure what “target / gun” is. We have T = target what’s under the navigation cursor, G = target nearest / highest threat, and next / previous.

Menu is a bit of a mess. I’m not sure what “Game” does ( open the system menu, aka escape, or open the in-game UI, aka tab ? ). It’s also missing the main one: weapons.

Another category is missing: overcharge modes ( off, weapons, engine, shields ).

Thanks for your answers.

Some of the mess is because in doing this the buttons need organising so I have to shoehorn them in to the least number of headings possible.

Buttons - could use ones in the cockpit and then in simdashboard I then put a floating text field above, if you or someone could provide one that would be great?

Flight - toggling flight assist - I was thinking of it as piloting because toggle off to strafe as arcing past on offset vector to approaching ship, turn around with it still off and missiles from pursuing ship would take a long time to hit while yours could hit them quickly as you are facing opposite to your vector.
Orbit - yes that is missing, the shield recharging tactic , will add it.

Map - as game is in early development maybe too early for this.

Target - gun was meant to mean gunsight and is T, I am not sure what a navigation cursor is?

Game - yes only music and quit should be there. I will move mfd and hud to the second column.

Overcharge modes - ok I completely missed those will add them.