after all this time (I haven’t played for >1year now) I still struggle with the unintuitiveness (if that’s an actual english word).
So as it happens I just wanted to play, so I joined a server (0 players at the time). However, there was nothing i could to to actually join the match (I thought bots would still fight when no humans are there?).
Nothing happened when i clicked on “Instant Action” or “Deploy At”.
According to those buttons I had either “Not enough credits” or “No A.I. ship available”.

I quit and tried another server (also 0 players), and the same thing happened.

Maybe the matches were in a state where new players couldn’t join (?), but please give the player a meaningful hint.
I have no idea what’s going on, and the situation that a player wants to join a game but can’t is probably not ideal, generally speaking…
I mean, i was basically locked out of the entire game.

I’m writing this here hoping that feedback like this would be useful for you, not to actually complain.

It sounds like you changed the ship selection ( ex.: a bomber ) or a different loadout, while you were on your starting credits amount ( you can then only afford an interceptor with its default loadout ). If that happens again in the future, post a screenshot and we can validate that this was your problem.

Thanks for your reply Flavien!
I think I skipped through all the ships, but none was available…I never even tried to change the loadout.
I joined the server and didn’t change anything before trying to click on “Instant Action”, and i couldn’t join the match… after that didn’t work I may have changed the wrong settings…
I actually took 2 screenshots, I forgot to post… here they are 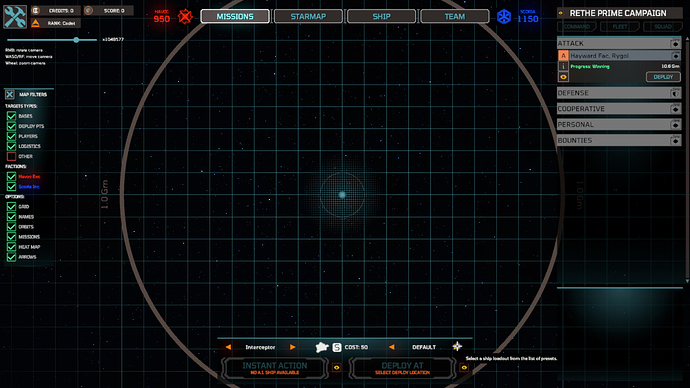 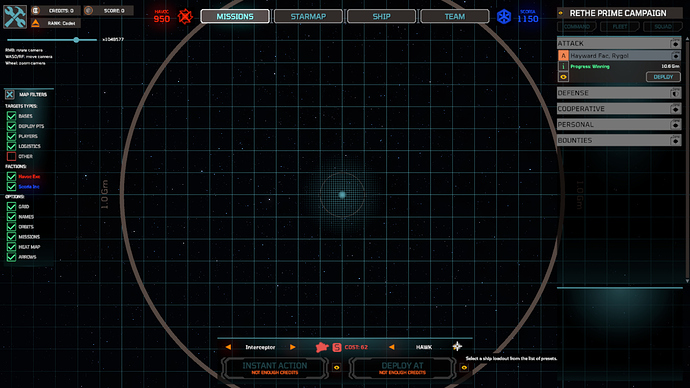 Yep, so the second screenshot is you selecting an interceptor loadout ( the Hawk ) that you can’t afford. Only the default one is available if you don’t have credits.

Was that right after joining a match/server for the first time ? I notice it says you have 0 credits. You normally start with 250 credits, so you should definitely be able to afford an interceptor or a bomber the first time you join a server.

Another thing: you’ve definitely joined a match at the end right before it finishes. The team scores are 950 vs 1150, so the match is still going on, but it’s possible that your team has lost its small-ships spawns, maybe only capital ships spawns ( which you can’t afford anyway ) are left, meaning that a new player is in a dead-end situation. We should probably detect that and display a warning, but other than that, it doesn’t look like a bug. If you joined another server and had the same situation, all I can think is… really bad luck. But I’ll do more investigations.

the second screenshot is you selecting an interceptor loadout ( the Hawk ) that you can’t afford. Only the default one is available if you don’t have credits.

I only tried to change the ship when I couldn’t join with the default settings in the first place.

Was that right after joining a match/server for the first time ? I notice it says you have 0 credits. You normally start with 250 credits, so you should definitely be able to afford an interceptor or a bomber the first time you join a server.

Yes. Actually I was playing before (1 or 2 other people were on the server when i joined). I did some testing and I also died a lot. Then I quit to change some graphic settings and shortly after restarted the game, and at that point I could not join anymore. I joined the same server as before (EU), so I guess that explains the 0 credits.

Could it have been like this:
1st server: remembered I was playing before and had died a lot. Hence the 0 credits. But I still could not join, because in the meantime my team had lost all spawn points - which was (and still is) not obvious to me, so i tried to find out if I could change the ship (see screenshots), which didn’t work anyway because of no spawn points.
2nd server: I probably had enough credits (?) I don’t remember… But i guess my 0 credits should be reset to 250 when I join a different server? So I guess that this match was also in a state with no spawn points available.

I think it should be made clear when there are no spawn points left. Any new 1st-time player would just close the game at that point, I guess…

I don’t know what a solution could look like because, well, I don’t really know enough about the gameplay yet…
To me the easiest thing to do would be showing the current number of spawn points… at least when it’s 0. Maybe like this?

Anyway, I guess there are more important things on your plate, but please add this issue to your “make game more intuitive” list

Thanks, that confirms my suspicions. it’s actually pretty important because it can cause some players to buy the game & refund instantly, so we’ll look into adressing that into the next patch.

As for seing if spawns are available, that’s the “SMLC” little icons displayed in the star map. On the top-right panel you’ll find a list of bases, and next to each base, it tells you if a spawn is available (white) or not available (in red). The spawn category matches the same letter/icon displayed at the center of the bottom-center deploy panel ( here in your pic, S = small ship = interceptors or bombers ). M = medium ships, L = large ( capships ) and C = carrier.

The credits are stored per server, and only reset when the match is over and restarts. So if you joined another server, you should have 250 credits ( you can test this next time by joining a server you’re sure you never visited before, like the asian server… ).