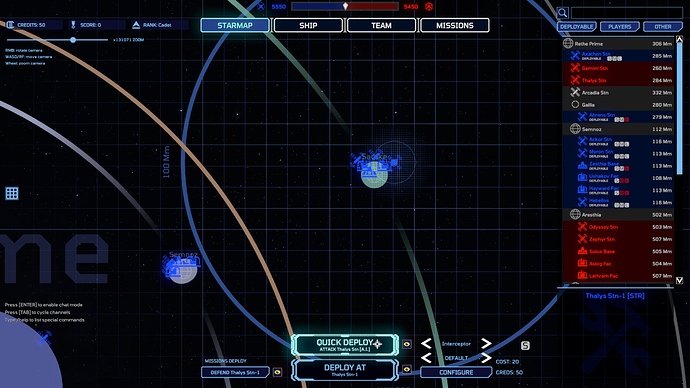 We have quite a bit of work left on the star map and the other in-game menu screens, so it is likely that the next major patch, probably until some time in July, is going to focus on those. The star map now has its new targets list and deployment system, but the viewport / rendering has to be improved, made more coherent ( like the sensors screen ), interactive ( being able to click on it ) and better represent the various points of interests and icons. For example, it is critically important that the star map clearly represents the active missions, or the bases under attack - and it fails at doing that at the moment - so we’ll be working on that next.

The other screens are also going to get some updates, but this should go faster. The team tab’s screen is probably going to be the most complex one. It’ll get a proper leaderboard, showing scores / stats for the players, but also team related stats and information. The idea here is that it’ll list all the bases, their status / HP, their recent income, damage take, etc…

Once the UI revamp is over, it’ll be time to move on to the more gameplay and match-related items, as mentioned in the last update. What will be coming next is probably the rework of the passive credits redistribution system, the match progression / critical battles, and we’ll be looking at starting the work on the AI / mission objectives soon in July, followed by the infamous ship upgrades.

The experimental atmospheric flight model is still coming, although the exact timing is unknown. The tricky part here is making the AIs take into account the atmosphere when flying ( rolling instead of yaw-ing, like in space ), but I think it’ll be pretty fun once it’s done.