Here is some feedback to the latest patch.

I feel there are some design decisions that are counter intuitive and go against what gamers are used to.

The first and most important issue I have is that it isn’t immediatly clear what is equiped on the ship!
It is also not clear where which particular item is located on the ship.
The gear column on he right is very cluttered and I imagine it will only get worse once more is added. 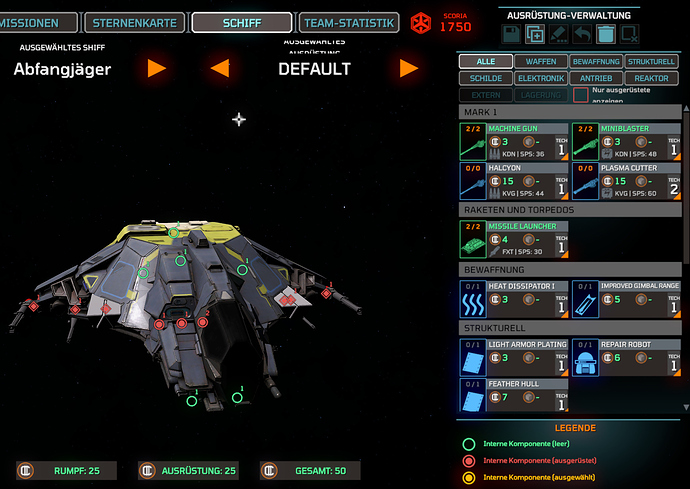 screenshot98gf.jpg1751×1241 520 KB
For example what are the numbers next to the checkboxes that are displayed on the ship?
Is this the tech level? It isn’t really clear to me.

The orange counters (“2/2”, “0/0”), I thought those were max slot indicators, for example it is very unintuitive to me that the max number changes, once more gear slots are freed, usually these kind of counters don’t change the max number and are there to only indicate the max number of gear items on this type of gear. 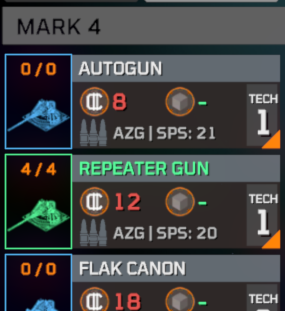 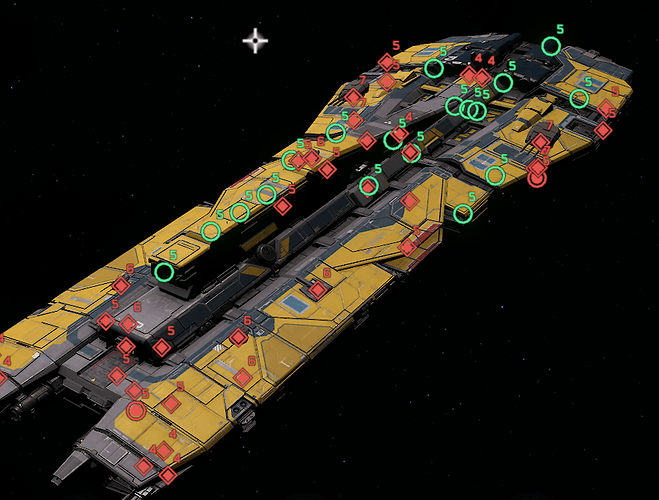 5t.png904×685 507 KB
It is also tedious to select the boxes to equip items. And then again having to check it all again to make sure nothing is wrong.

My recommendation is to change the way gear is equiped.
_ 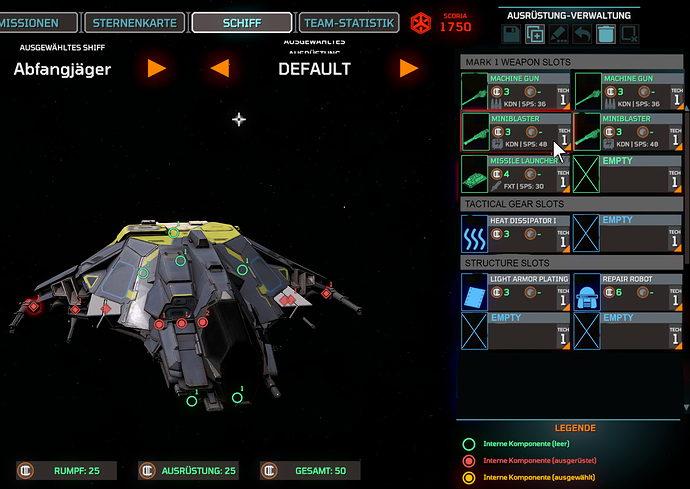 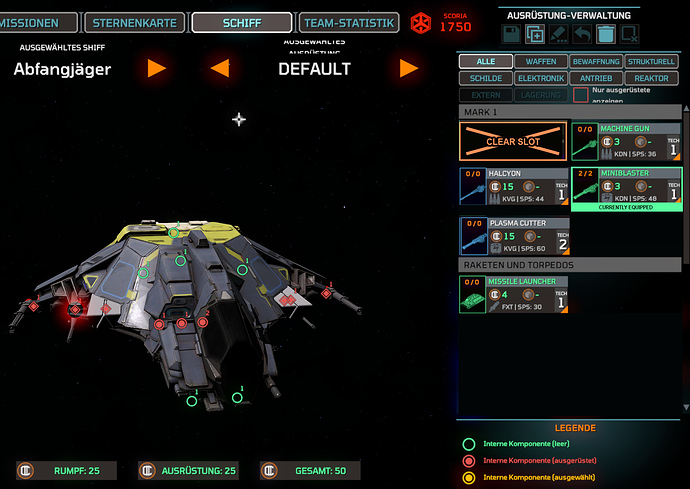 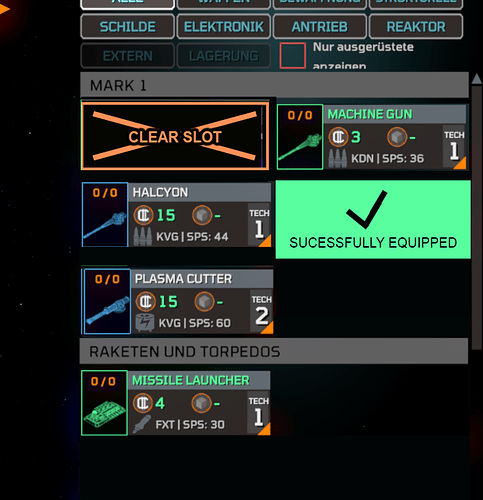 IMO this is a better solution because it functions like that in most other games. Also the amount of available items is prefiltered, because only items that can be equipped on the selected slot are displayed in the equipping screen. The whole select dots on a 3d ship thing is pretty much removed. Also it shows at a glance the items that are currently equipped.

Another thing I would change is the color coding of the slots/gear items.
I would suggest to color code all slots by the type of equipment they can hold.

One other thing I would suggest is instead of displaying checkboxes on the ship, instead to display the icon of the item that is attached to the slot. For that there needs to be a secons set of icons for each weapon item, a iconset that is reduced to the point that distinguishing features of the weapon are visible with only a few lines and at a tiny scale. These second icons could be displayed next to the name of the item in the right column for reference (for example “MISSILE LAUNCHER

Ship customization is a really nice addition to the game. For the first iteration it works fine, and the hoping is that it will only get better with the future updates. One particular point is the GUI. Please, think about how it can be made more informative and less cluttered (this especially applies to capital ships, where there are tens of hard-points). Furthermore, I would suggest to slightly increase player’s starting credits, so that they could slightly change their starting layout.

Some general feedback and suggestions below.

One thing, which breaks immersion and isolates the player is the spawning/despawning of AI fleets. I suggest that prior to an attack mission, the AI fleet is spawned at a nearest allied base and then flies to the destination in formation. The player should be informed about it and be able to join the fleet. This change would also allow enemy players to scout such fleets and possibly delay the assault by attacking them.

In conjunction with the previous point, the surviving attack/defense fleets should have a staging area for repairs and resupply. Perhaps, this should only apply to the main attack fleet (with capital ships).

Unfortunately, and correct my if I’m wrong, there are zero activities for players outside of combat. Because of this there are zero reasons to fly down to any of the planets or do any exploration.
I suggest to introduce scooping/mining/collection activities (the more the merrier). For example, there could be some random/handplaced spots on the planets and in their atmospheres, for mining of minerals and scooping fuel. Such activities should ultimately generate team credits (they may also boost player’s credits). These spots should have some kind of hazards in them. For example, some AI enemy ships (pirates hostile towards everyone) or natural hazards such as EM storms or some such.

It would be great to see some variety.

Thanks for all the feedback. @Playbenni As I already mentionned on Discord, we’ll have a look at doing some of these UI improvements in the next iteration of the ship upgrades UI. Some of these are common sense, others are more controversial and fill need further discussions.

For example what are the numbers next to the checkboxes that are displayed on the ship?
Is this the tech level? It isn’t really clear to me.

That’s the Mark class level, aka MK1-MK7. If you have any idea on whether it’s needed at all ( I think so, it can be useful to know, sometimes some weapons/equipments are compatible with different mark classes ), or how to better represent it, let us know.

The orange counters (“2/2”, “0/0”), I thought those were max slot indicators, for example it is very unintuitive to me that the max number changes

As I explained on Discord, the main issue with this is that the max number shows the number of slots potentially available for a given upgrade. If it showed “compatible” slots, despite them being busy/mounted by something else, then you wouldn’t be able at a glance to see anymore which weapons/upgrades can be potentially mounted somewhere (=in blue color atm). You’d see a bunch of weapons/upgrades with 2/4, which would make you think there are still 2 other slots you could mount them on, which isn’t true, because the 2 other slots would be mounted by something else already.

If you have 4 MK1 slots and consider the machine gun and the blasters, if you mount 2 MGs on the first 2 MK1s and 2 blasters on the other 2 MK1s, what would you expect the cur/max numbers to display ? It currently shows 2/2 for both weapons, but if you showed 2/4 you’d think you could still mount more weapons, while in reality all the slots are already taken…

One other thing I would suggest is instead of displaying checkboxes on the ship, instead to display the icon of the item that is attached to the slot. For that there needs to be a secons set of icons for each weapon item, a iconset that is reduced to the point that distinguishing features of the weapon are visible with only a few lines and at a tiny scale.

It’d be nice but then the smaller iconset wouldn’t match the bigger one anymore, creating confusion. Also, adding all these icons might make the viewport even more cluttered. It’s worth experimenting but I think that might be a false good idea.

@FlyingCrowbar Thanks for the feedback. The good news is that almost everything is mentionned is on the todo list, in a way or another.

That’s planned, but AI changes are very experimental in nature and we’re talking of turning the game into a full MOBA, with ships travelling in warp as fleets between various bases in the system. There’s a large mount of work needed to implement that and make it work well, so we don’t have any ETA for this feature, but it’s something that’s already been in the design phase for a while ( in fact in early January we made a bunch of 3-hours long meetings with the team to discuss the design of the new AI ).

Unfortunately, and correct my if I’m wrong, there are zero activities for players outside of combat. Because of this there are zero reasons to fly down to any of the planets or do any exploration.

Yes, but we’re also planning on adding more mission types. That’s why the mission screen has various placeholder categories, if you noticed, which are currently unused. Environmental hazards is also something we want to do in the long term.

THANKS! for the Stars/Background slider! Previously it was possible to edit the galaxy but there wasn’t a way to remove that blueish tint. With the slider, that can be toned down now.

Straight into the Railguns …
At first they seemed a bit overpowered but the more I played with them the more the downsides showed. The weight being very noticeable. They seem to be the strongest on the bomber right now. I also tried them on capitals and the limited range and very high price really don’t make them worth it. Didn’t really compare with other weapons though.
While they seemed fine when used, they are a bit too easy to sustain fire them. Hutch mentioned that they were supposed to also have energy use, which would compensate that.

The updated corvette interior is nice and I had quite a laugh, thanks Jan.

Bigger debris give some nice atmosphere. To me they added something that was kind of missing before.

The new stations are also nice and interesting. Sad we didn’t get to see the new Skycrane yesterday.

Sub targeting worked great for me. I heard some people had the issue that the sub target Name didn’t show up beneath the target name.
It was a bit confusing that it only works at a certain range and also that when leaving that range the sub target keeps locked but the name goes to “unknown”.
I am glad that feature is in now so that it can be used to further the gameplay down the line …

The update is nice and added a few features and some optimization. I can imagine it took quite some work to pull off but it didn’t really move the gameplay.
There are a lot of tools now the player can use but with how the matches are working since quite a while and the limited amount of players there are only a few builds and strategies that make sense to … well win a match of consecutive blobs.

Which is, start with cheap bomber with max torpedoes, try to keep downing as many capitals as possible.
Then switch to a cheap cruiser with max torpedoes and long ranges weapons and do the same.
This has the biggest impact on battles. Anything else doesn’t really matter much. 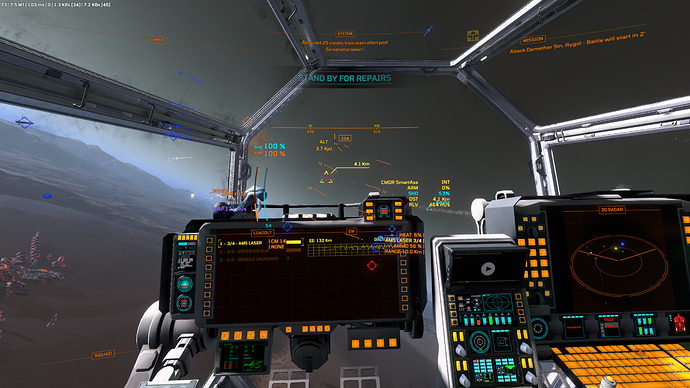 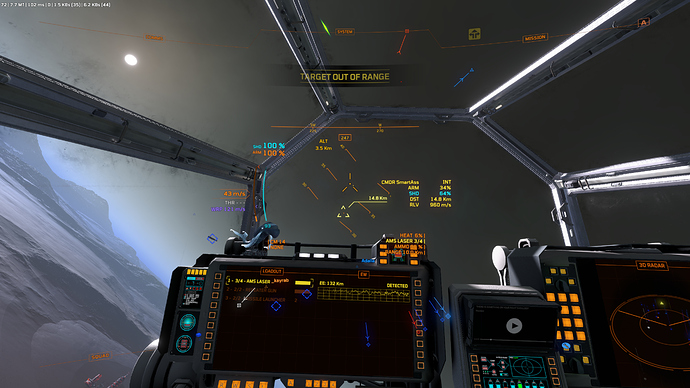 “Unknown” showing after leaving sub target range, error sound is being played when trying to sub target, but no error message is displayed: 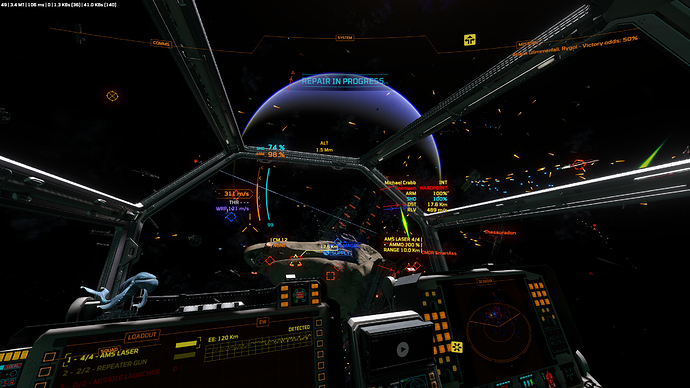 Spawning inside geometry on a land base. Happened to me consistently on a certain base. Seem to spawn right underneath the pad: 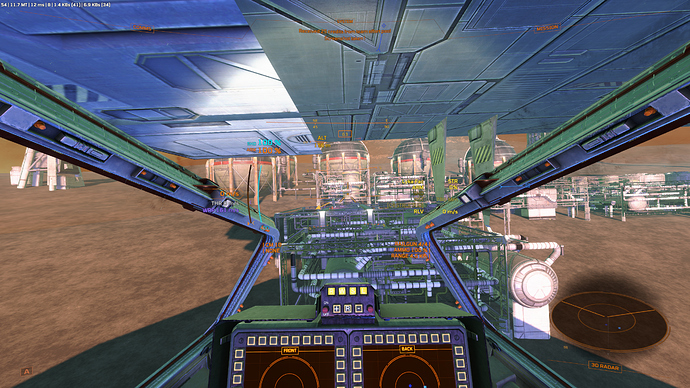 Some insignificant feedback, but I feel I should still mention this. From the main page overview:

[…] strategic locations, referred to as Battlescape’s , across a wide range of […]