Having trouble with YAW

If I use the default configuration on the keyboard or on my hotas / t16000FCS the yaw works, but it is that I fly in simulators and the axis that is used for the yaw you have it with the roll and I want to change it.
Why can not I change it? It does not work. I do not need anyone to tell me that in a space simulator it’s different. I just need to know if they are going to fix it, I should be able to apply any axis of my hotas to the yaw without problems.
help please

The most fundamental thing to understand when setting up an HOTAS is that the game offers different control schemes, and the default one isn’t meant to be used for HOTAS as is.

The default control scheme is what I call “target navigation cursor” - it is meant for mouse orientation. The position of the cursor on screen determines a “target rotation”, the further away it is from the screen center and the faster the ship turns around.

The control scheme better suited for HOTAS is called “Direct”. In this mode, inputs to the stick are directly interpreted as an angular acceleration.

You can switch between control schemes in game with the F4 key. Default is “automatic”, but you can cycle to “target”, “direct” or “capship” ( that last one is only for capital ships, out of scope for this discussion ).

Now, when setting up your HOTAS profile, you’ll notice at the top that there are 2 categories. The first one is “Direct Flight Mode”’ and contains “ShipYaw” and “ShipPitch” axis. If you’re assigning your stick inputs to these, you need to use F4 to select Direct Mode.

You can also use a HOTAS in the default “target navigation cursor” mode though, hence the confusion. The events in this case are called “SetCursorX” and “SetCursorY”. It’ll indirectly control pitch and yaw, too, but only because the behavior of pitch / yaw is interpreted from the navigation cursor position on screen.

So, in summary, a lot of newcomers are struggling with their HOTAS Pitch / Yaw because they’re unaware of the different control schemes, and are trying to use “ShipPitch” and “ShipYaw” while effectively using the default navigation cursor mode, which does not use these events.

I’m thinking of a way to keep different control schemes, but unifying the events to avoid confusion, in the future. It’s not implemented yet because we need to work on the UI / menu system first, but we’ll eventually get to cleaning all this stuff for the release.

I did what you explained change to “direct” the “target naviation cursor” and now the yaw works in my hotas, thank you very much.

When I use direct mode with F4 the hotas works, ShipYaw = Jostick0axis5 and ShipRoll = Jostick0axis0, but it does not have precision, since it moves constantly. I have to do an inverse movement with the hotas to correct and not pass constantly and it is very difficult objective.
Do I have to configure something else?

You mean like a small jitter ?
If so do you by any chance use for this axis something like a grip twist ?

The YAW does not work

Why can not I change it? 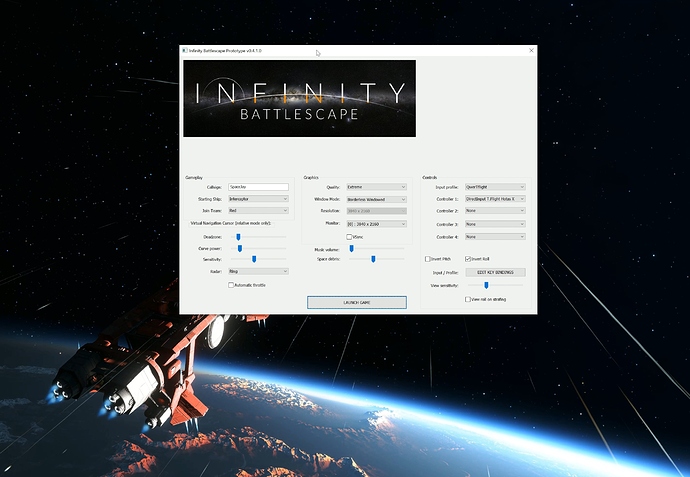 and TADA! the keybindings editor: 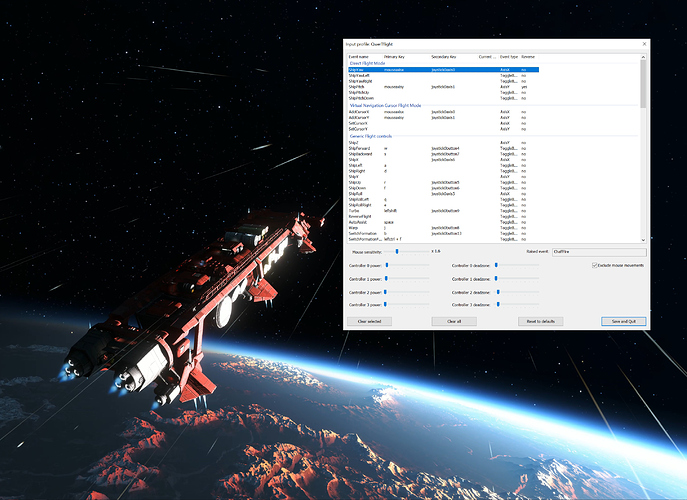 I’m sure yoiu can figure it out from here…

Thread title suggestion:
"Having trouble with YAW" instead of "The YAW does not work"

Not to be to be obnoxious or rude (I’m sure you are not either) and I would encourage new players to ask about anything, there are a whole bunch of us more than willing to help.

Knowing how frustrating figuring things out can be, when you just want to get out there and fly.

I have the th16000 fcs a hotas, accelerator + stick, I do not have pedals. I also fly flight simulators and the yaw I always have it on the axis that has to be twisted on the stick, the pitch on the Y axis and the roll on the X.
I would like not to have to change if possible, if it is impossible, then I will have to adapt.

I have the th16000 fcs a hotas, accelerator + stick, I do not have pedals. I also fly flight simulators and the yaw I always have it on the axis that has to be twisted on the stick, the pitch on the Y axis and the roll on the X.

I would like not to have to change if possible, if it is impossible, then I will have to adapt.

I would encourage you to look at SpaceJay’s post and see if you have correctly set your controls.
Or if you by any chance don’t have duplicate yaw input on other device too (primary key/secondary key rows)

Look i can tell you that if the joystick isn’t like one month old. It 99% does have jitter.
Unlike X and Y axis which in some joysticks are made with magnetic sensors. Yes yours is made this way.
For Grip Twist is usually used potentiometer.(resistant ceramic strip with metal slider) also your case.
This electronic component has drawbacks that it usually degrades over time.
You can clean it with isopropylalcohol, to mitigate this. But it is only temporary fix and often it does not help at all.
In general it will happen again and again. Its technological limitation.

And i suspect that reason why you don’t experience this in other games. Is that you just didn’t noticed it yet.
Let me guess Elite dangerous or any regural Flight sim, right ?
In Elite yaw is so limited that it might in practice function as a filter of your inprecise axis output.
And in regular sims rudder also does not have too high control authority. And you might use it only for “proper” turns
or to counter wind. And for military planes you might not even need it most of the time, perhaps for some aiming correction.

Your only hope is that manufacturer will start using hall sensors for the twist too.
This wont happen. They would never ever sell another piece.
(there are few that might but are extremely expensive for obvious reasons VKB, Virpil… etc)
Ask Microsoft why they stopped producing their Precision Pro

Or use pedals which use bigger potentiometers which are more durable.

Overall this does not seem like a game fault but of your device. Simply Yaw in Infinity is as strong as pitch and bank.
Other suggestion would be lower the sensitivity of yaw axis it might get more manageable.

In the automatic control mode my hotas is precise but the yaw does not work, when I switch to direct mode it is when I have the problem of precision. The hotas has a month, in IL 2 Stalingrado, in X-Plane 11 and Star Citizen works, in Elite Dangerous I have not tried it. Where can I change the sensitivity curve of the jostick in Infinity? I only saw to change mouse sensitivity.

In the automatic control mode my hotas is precise but the yaw does not work, when I switch to direct mode it is when I have the problem of precision.

You pretty much answered it yourself there. Those are different settings.

hotas has a month

what a coincidance right

Where can I change the sensitivity curve of the jostick in Infinity? I only saw to change mouse sensitivity.

Sorry, i do not understand, i dont see in the second image sensitivity curves for a axis of a jostick, only see for mouse.

What exactly is imprecise? Only the yaw input in direct control mode or ship pitch and ship roll too?
The joystick twist is imprecise by nature of the device, so if you are looking to have precise yaw control with a twist input you can basically scrap that idea, that’s also the reason why most Star Citizen pros use a double stick setup and or pedals.

Keep in mind that the yaw axis in Battlescape isn’t artificially crippled like in Elite, so this problem is much worse in Battlescape.

Could you make a screenshot of your profile setting like this one?: 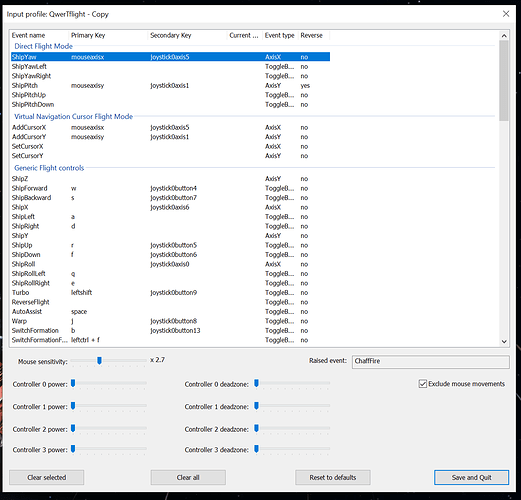 In the automatic control mode my hotas is precise but the yaw does not work,

My YAW does work in automatic/target mode. I also tested it on diferent axis, also the twist axis.

So I think you should be able to do the same.
It’s just a question of setup.

Also, what keyboard do you use, QWERTY or AZERTY?

So if I could see your profile, maybe I can help you use YAW in automatic/target mode. 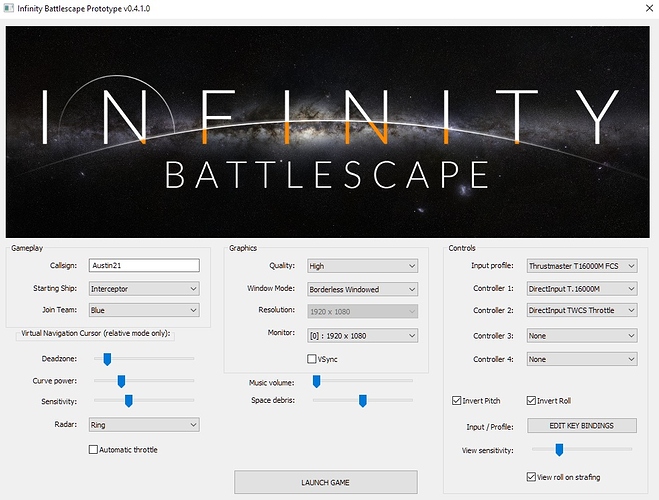 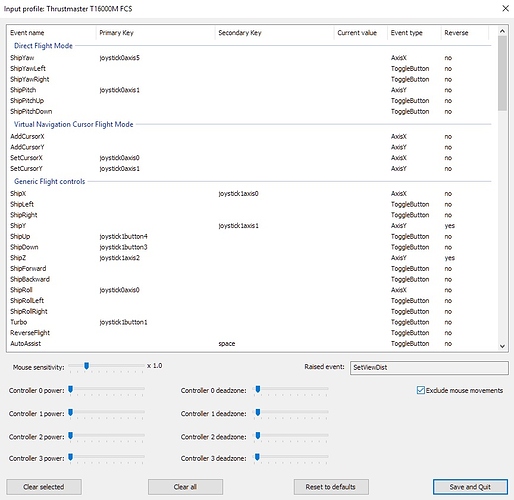 002.jpg864×840 126 KB
When I use the mouse with Qwerty everything is fine. When I use the hotas with T16000M FCS in automatic / target mode all the axes are accurate but with my axes configuration the yaw does not work, when I change to direct mode I have yaw but all the axes are inaccurate what happens is that they do not stop At the moment you have to give the opponent or handle it very slowly and smoothly.
Thanks for the help if I can not adapt to the hotas I will play with the mouse…
1 Like
SpaceJay March 1, 2019, 11:37am #16

OK, so I think you should map all your joystick controls under Secondary Key.

All your Mouse and Keybord should be mapped under Primary Key (your joystick(s) will still work in target mode and direct mode).

Just make a copy of the original QWERTY.xml, Name it something else and edit this new profile in the Key Bindings Editor.

This way you can always use everything. (keyboard, mouse and joystick(s) and YAW should work in both target or direct mode.

Hope this works. I don’t have a T16000M FCS, otherwise I could’ve just given you my profile.

Another issue I can see is you have an axis assigned to ShipY and then two buttons assigned to ShipUp and ShipDown. Those are probably exclusive, so I wouldn’t be surprised if there was some kind of weird conflict there.

They are repeated, now I will erase the two buttons assigned to ShipUp and ShipDown, thanks.

Curious those “Controler power” sliders in settings, i always treated them as sensitivity sliders.

Are they actually multipliers ?
Or is it a typo and they really are sensitivity sliders.