Livestream from a fan: http://www.twitch.tv/kerrashlanding

Someone check if this planet is just a 2D background or a textured 3D mesh: 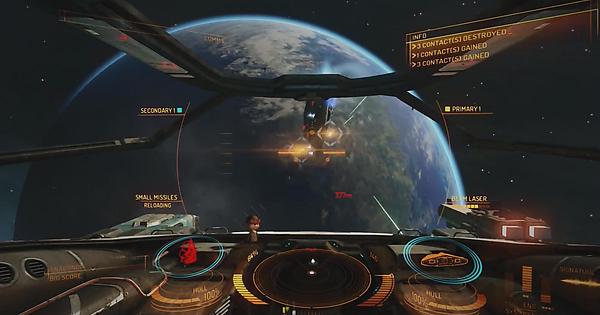 I have been watching it for a while now, looks really nice. They have come along way from their Kickstarter.

Looks like there is no yaw control?!? and pitch/roll is slowww, even in the little Sidewinder.

TBH, I’d given up on the game when they confirmed that THAT would be their flight model (previous encounters with similar models left me confused and nauseous). But if that pace is what we can expect, that looks downright tolerable.

Very disappointed in the lack of yaw though.

The closest I’ve seen to a Hollywood CGI sequence in any game. Not bad.

I hadn’t realised that was going to be the case. How does that make any sort of sense at all?

Lemme paraphrase one of their devs:

How does that make any sort of sense at all?

In theory, limiting controls to roll and pitch could allow you to forgo dedicated maneuvering thrusters entirely without adding anything but software, thus reducing mass and increasing both linear and angular acceleration (in some directions):

Assume you have a spaceship with 2 main thrusters. Further assume that each of these 2 thrusters have a “shield” that can be folded in to redirect their exhaust forward, allowing them to “decelerate” almost as fast as they “accelerate”. This could be very useful in a dogfight and may in fact have been done IRL with jet engines.

If each shield came in an upper and lower half, not only would it deploy slightly faster, but a simple software tweak could deploy only 1 half of the shield on each engine providing (potentially very powerful) pitch and roll controls.

One this I noticed in the ICP was that trying to dodge the pew pew weapons of a fighter was almost entirely pointless; it’s radial tracking was great enough that you had to be within a few hundred meters, going at maximum velocity, to even give the pilot a hard time following pointing his ship at you. Needless to say, going at that high a relative velocity rather limited how long you’d spend in such a small volume of space.

Basically, 90% of dogfights, for me, was pointing my mouse at the dot that meant “enemy fighter” and maybe use translational thrusters to make myself slightly harder to hit. Worked quite well, too.

Having no yaw control means that, assuming the guy you’re shooting at know what way you’re rotated (and that youtube vid shows a rather nifty looking holographic HUD that might well be displaying just that knowledge) he can use that knowledge to turn in a direction you can’t easily follow, while you of course can keep an eye on him preparing to do so and respond preemptively, all of which could certainly make dogfighting a hell of a lot more interesting than the usual “airplanes on a black background”-model. Personally I’d still prefer the ICP/Newtonian model as that (with practice) will allow me to occasionally blow my enemies out of the sky while going backwards or sideways, but it’s a step in the right direction.

Not only is there yaw, but you can also turn off flight assistance completely. That just leaves you alone with your thrusters without any dampening. Should be good for some skilful dogfighting manoeuvres once mastered.

Not only is there yaw, but you can also turn off flight assistance completely. That just leaves you alone with your thrusters without any dampening. Should be good for some skilful dogfighting manoeuvres once mastered.

Does that mean that when you start rotating, it won’t stop the rotation? Or will it point to the new direction as fast as it can, as in ICP or in Pioneer when using (IIRC) right-click?

Does that mean that when you start rotating, it won’t stop the rotation? Or will it point to the new direction as fast as it can, as in ICP or in Pioneer when using (IIRC) right-click?

That’s right, once you start rotating it won’t stop, you have to stop it yourself.

Thanks for the info.

I bought the ‘standard’ beta.

It looks very ICP-ish. And very much polished.

For those in the alpha, how does the newtonian combat feels compared to ICP ?

Looking at the streams, it seems like there’s a much lower top-speed ? The ships also look bigger. The combination of the two make the combat feel slower / happening at shorter distances…

It looks really well polished for an alpha. And performance seems good, even though there isn’t much displayed on screen.

Here’s a guy playing one of the mission with flight assist off:

Feels much nicer to me.

Are you participating in the alpha Rich?

Are you participating in the alpha Rich?

Nope, couldn’t stretch that far so I’ll have to wait until next year and the first beta phase.

Infinity is going to have a very hard time competing with that. If they ever finish their game in the first place.

That’s right, once you start rotating it won’t stop, you have to stop it yourself.

I tried to fight like that in Pioneer, by piloting with the arrow keys. Emphasis on tried. Can some of you tell me how different it is from it? (Apart from the polish difference, which is between a marble statue and rusting nails.)
The player in this video has a hard time aligning the enemy ship, so it looks it has the same problem. That said, this piloting style looks great.

IIRC, Frontier is developing it with a 360 controller in mind as the primary control input. The guy in the video was using a HOTAS setup with joysticks.

Throw in keyboard, and I think that’s it.

Maybe I haven’t given it enough time, but the piloting is still highly-frustrating to me. As napalmi said, there is yaw, but…not really. Yaw is so weak that it’s useless. The only real way to maneuver is pitch + roll. It feels as though much of the “excitement” of combat comes from the difficulty of targeting and piloting in this manner. Then again, I am only halfway through the missions. It’s possible that it’ll grow on me.

Overall, as many have already noticed, it is highly-polished for an alpha

Sound design, graphics, and UI are all very solid. Gameplay…we will see