This upcoming month ( June ) we are going to focus on a few things: first of all, the sensor overlay / tactical screen implementation is only at its initial stage; we’re going to spend a few extra days to fix bugs and improve it. The idea here is to make the icons clickable to show a little popup / vignette screen in a corner which will highlight the icon on which you’ve clicked ( or hovering the mouse ). It’ll show the usual information: name, status, health / shields, etc…

The other idea is to add more tactical information to this screen. It’d be interesting to show the ship’s velocities and maybe arrows that represent what your allies / squad members have selected or are currently targetting.

In a future update ( not any time soon ), probably when we implement the squads management system, this screen will show more information about your squad members. It’ll also be the screen where you can assign objectives to your squad members ( if you’re the squad captain ), set a beacon / ping, or highlight a special target for others to see.

In June, the other big thing is the star map revamp. We’ve been working on its new design internally for a while. We want the new star map to better show objectives / bases, highlight which ones are under attack, where the missions are ( without having to go through the mission tab ), where haulers are flying ( so that you know you can attack or escort them ), and show clusters of ships / players / where the action are. There will be some overlap with what we’ve been doing on the tactical screen recently; for example, we’re thinking of using the same “heat map” system to highlight clusters of ships.

June’s goal is also to improve the credits redistribution system ( going back to a more passive system ), address some issues with the AI battles flow ( getting ride of non-critical battles which make it feel like you have no impact on the match ), add in-battle sub-objectives ( ex.: corvette getting a message to resupply / repair other ships ), and a first implementation step for battle reports ( statistics showing how well you’ve been doing in the battle ).

In terms of interface for new players, we want to revamp the help tips system ( adding more to them - you know, the little messages popup up with a help message for new players ) and add a bunch of context-sensitive popup help screens for first-timers.

Finally, we want to experiment with atmospheric flight model changes to better differenciate atmospheric and space flight, so that planetary battles have a different “feel” than space ones.

Needless to say, this is gonna be a busy month and we’re not sure how much of this we can accomplish in a month, so it’s very possible that some of these will leak into July.

The more I look at it, the more I like the sensor overlay. Really well done, there’s plenty of really cool stuff you could do with it. Excellent update, looking forward to June!

The “heat map” glow is a bit over-done, we definitely need to do some tweaks to it so that it doesn’t shine in your face that much

I’m starting to think the heat map isn’t what’s making things difficult to see, but how the ship icons and plane altitude lines are a bit dull/faint.

This tactical overlay is exactly what I have been hoping to see from a space combat game since Homeworld. House of a Dying Sun did an ok job of it, but it wasn’t very satisfying to use. From what I saw of Dan’s youtube replay I really like the idea of being able to choose different planes of reference to help players use it for communications.

As for the heat map, I can see this being useful on a macro scale across the system rather than around a station like in the screenshot. At that image’s scale the target markers do enough to show ship locations.

Heatmap does add a good deal of ‘ambience’ to the view though. Works especially well when the two sides are clumped up. 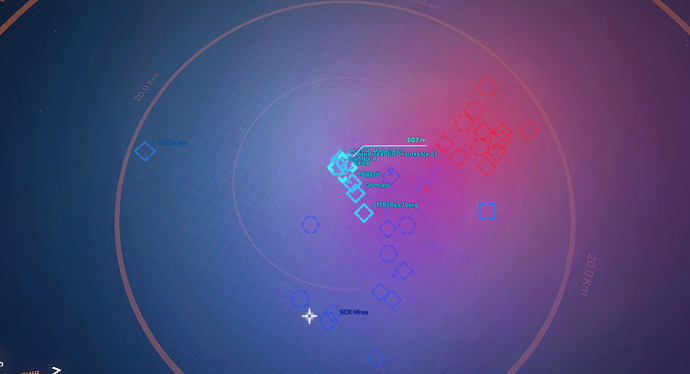 I feel like the little “height” lines are not very useful in their current form. I remember having some conversation about this in the past, but I’d very much prefer if they were eve style arcs instead, that follow a sphere surface centred on the grid origin. That way the end point of the lines on the grid corresponds with their actual distance from the origin, making the grid meaningful in all three dimensions.

Alternatively, the grid could just rotate with the camera but that might be a bit disorienting.

The trouble with eve-style lines, although very useful for distance from your ship with eve’s damage falloff caps and ranges (and suits Eve very well because of it), that system isn’t nearly as useful for judging where ships are in relation to eachother in the combat zone. That doesn’t matter so much in eve with its much slower pacing, but matters an awful lot in a faster-paced, twitchy space shooter with a much more freeform and dynamic combat flow.

Eve only has that system because of the specific way weapons systems work there. When you’re plotting falloff curves on a graph, distance-to-target becomes one of the most important things in the world.