Bring back target's status directly on the selected target

Having to travel my eyes to the top right corner of the screen in order to check my target status is distractive, especially when I am focused on firing on target.
I liked this feature in the previous versions, we had the informations directly on sight without losing focus when we want to check target’s informations:

I suggest to bring back this HUD element (maybe as an option we can enable or disable), with the new layout, there is plenty of room to bring it back like this: 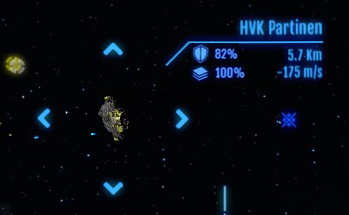 Whatever the solution, the target information definitely needs to be more visible - and that means bringing it closer to the centre of view.

I’m ok with it being there, as long as the static window we have on the top right stays.

When I originally suggested the static target info window, I envisioned it to be more in the centre and prominent, like for instance on the opposite side of the speed setting readout. I think that would have made some of your concern much less problematic.

I am of the opinion that having to track moving text is really horrendous. I am glad it is only the currently selected target and not distance to all targets like in WarThunder, which would have been ridicolous.

I need the static window to be able to see that status (or even name) of the ship, even if it isn’t on screen, I hope @Speedy_Von_Gofast you see that necesity too.

Additionally while we are at that … what happened with the circle radar and the “point towards target” pointer? They are gone … I didn’t really need all the singled out icons on the ring but I really needed the “where is the current seleceted” target readout … that is obviously missing.